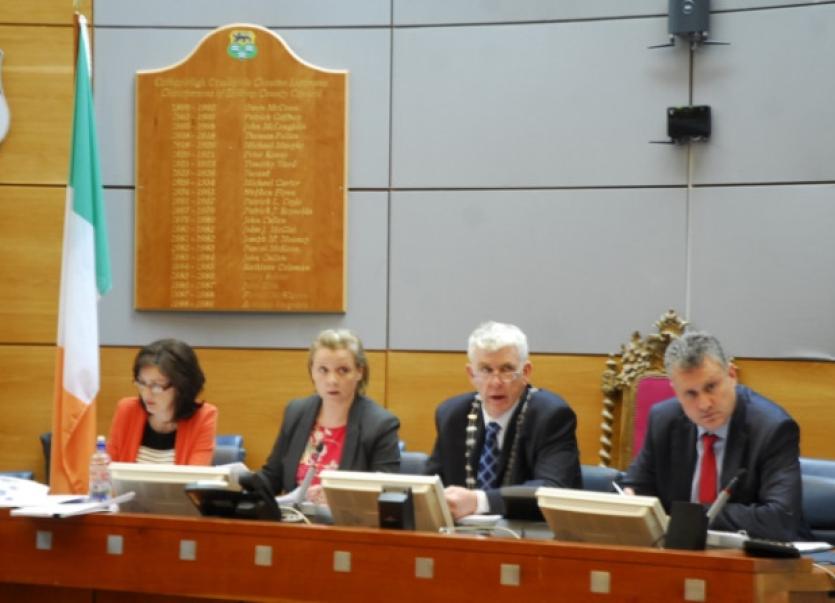 Sinn Féin’s four councillors and Independent councillor, Des Guckian, have expressed their anger following a last minute agreement which was secured with the support of two other Independents, between Fine Gael and Fianna Fail for the running of the incoming Council.

Sinn Féin’s four councillors and Independent councillor, Des Guckian, have expressed their anger following a last minute agreement which was secured with the support of two other Independents, between Fine Gael and Fianna Fail for the running of the incoming Council.

Under the agreement Fine Gael and Fianna Fail will share the positions of Cathaoirleach and Vice Cathaoirleach on subsequent years.

Following the election on May 23, Sinn Féin had proposed that the position of Cathaoirleach and Leas Cathaoirleach should go on a rotating basis to Fine Gael, the Independents and Sinn Féin with Fianna Fail, as the biggest party, getting the positions for two years.

The proposal also involved the proportional distribution of all other positions on committees and boards on the basis of group or party strength.

The Leitrim Observer understands that until shortly before the Annual meeting, Fine Gael were in discussions with Sinn Féin and some Independents, however Cllr Martin Kenny confirmed this agreement fell through on agreement being reached between Fine Gael and Fianna Fail.

This means the top positions will now be shared between Fine Gael and Fianna Fail for the life of this Council.

Speaking following a defeated bid for Cathaoirleach, Cllr Kenny congratulated the new Chairperson, Cllr Paddy O’Rourke, but said he was extremely disappointed that the two main parties have “come together to once again grab power in Leitrim County Council”.

“I felt that on May 23, people voted for change but it is clear that this will not be the case in this Council.”

Independent, Cllr Des Guckian also, while congratulating Cllr O’Rourke, in a personal capacity, said that it was unfortunate his election had been “brought about by a coalition of Fine Gael and Fianna Fail, who have bought this county council and this country to its knees”.

Cllr Guckian said that the agreement between the main parties flew in the face of the wishes of the people.

“It is a vulture culture, people who gather and take what’s available leaving very little to the rest of us,” he said.

Cllr Guckian insisted he was the only truly Independent councillor, a claim which drew the ire of the three remaining Independents, with Cllr Gerry Dolan pointing out that he alone was the only councillor who did not vote with one side or another in the election of the Cathaoirleach or Leas Cathaoirleach, or other appointments, choosing instead, to abstain.