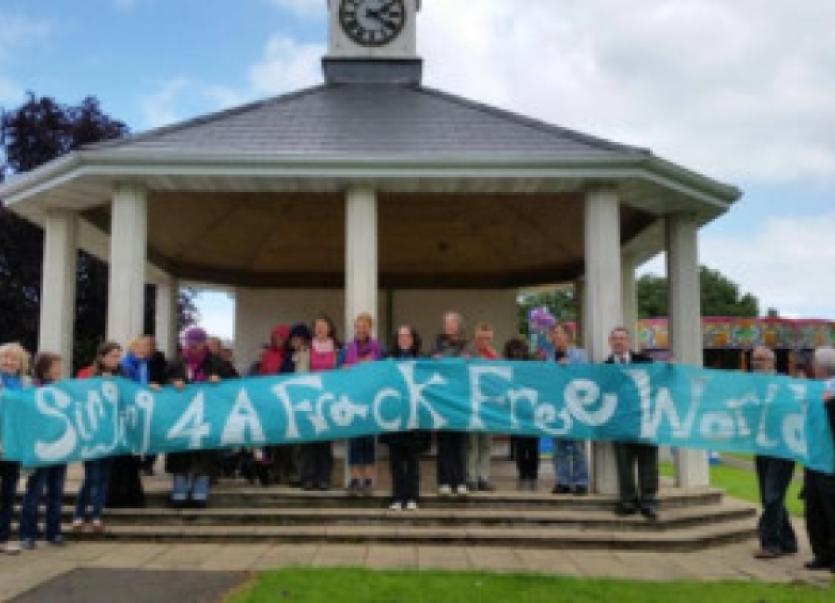 The protests against the possible use of hydraulic fracturing in Co Fermanagh continued this weekend, albeit in an unusual format, as an enthusiastic crowd met to make a stand against fracking through song in Belcoo on Sunday.

The protests against the possible use of hydraulic fracturing in Co Fermanagh continued this weekend, albeit in an unusual format, as an enthusiastic crowd met to make a stand against fracking through song in Belcoo on Sunday.

The unique celebration and protest through ‘a cappella’ singing involved singers from Mullaghdun, Letterbreen, Belcoo and all over the northwest.

On Saturday The Fishermen Are Resisting Tamboran Group brought their boats from Belcoo to Enniskillen to demonstrate their unhappiness at the perceived threat fracking poses to the rivers and lakes of the Northwest.

A spokesperson for the local community noted “This has been a traumatic few weeks for the Belcoo community and those of the surrounding areas in Fermanagh, Leitrim etc.

“Whilst Minister Durkan’s decision on Monday was to refuse drilling under permitted development rights, the cross community groups involved know that this is only the start of a long road ahead,” they told the Leitrim Observer this week.

He ruled that this was and Environmental Impact Assessment development requiring full planning permission, a move welcomed by campaigners who had been camped at the gates of the quarry.

Anti-fracking campaigners are remaining vigilant and stress that they will continue to oppose any moves by Tamboran to seek planning permission to commence hydraulic fracturing.

Their vigil is being supported by many people from throughout Counties Leitrim, Sligo and Cavan who have travelled up to Belcoo in recent weeks in a show of support.

Love Leitrim representatives are encouraging people to keep showing their support for the people of Fermanagh, noting that the battle against fracking will have to continue both north and south of the border if the process is to be kept out of the island of Ireland.