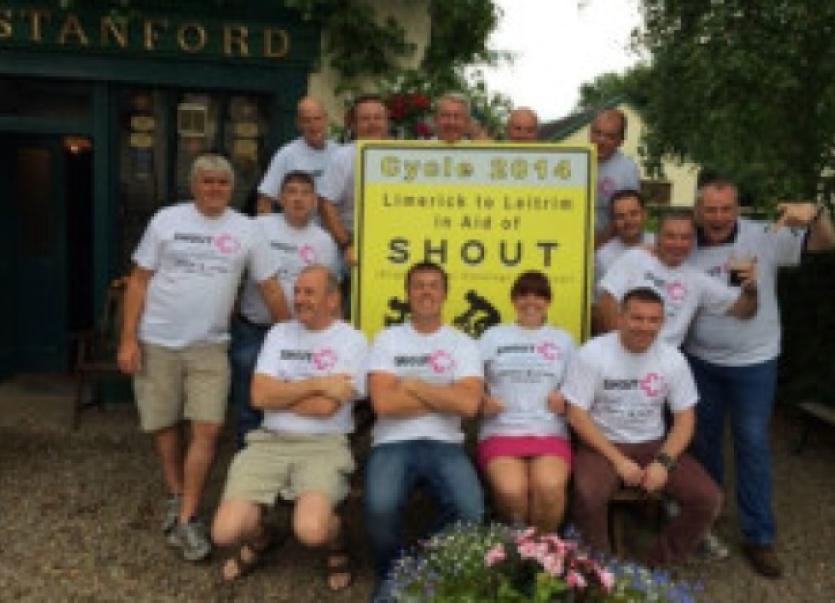 What started out as one man’s plan to cycle from his home in Dromahair to his native Limerick last year snowballed into last week’s two day trip that saw 15 cyclists make the journey from Limerick to Leitrim.

What started out as one man’s plan to cycle from his home in Dromahair to his native Limerick last year snowballed into last week’s two day trip that saw 15 cyclists make the journey from Limerick to Leitrim.

Last year John Cavanagh came up with the idea and was quickly joined by his son, daughter and some friends as a small group cycled south to Limerick.

The success of that trip prompted others from the area to become involved in this year’s fundraising cycle which went in the opposite direction, from Limerick to Leitrim.

Last Thursday saw the 15 cyclists and support crew travel to Limerick and the following morning the 240km cycle home began shortly after 8am.

It was stressed from the outset that the cycle would not be treated as a race and all cyclists remained together as they travelled to Nenagh, through the midlands and on as far as Roscommon on what was a 150km trek on the opening day.

The final leg of the trip, from Roscommon to Dromahair was captured on video and has already proved to be an online hit. It captures the stunning scenery, the tough climbs, the horrible weather and the triumphant return.

The video also features interviews with John and his partner Sinead, who was instrumental in the logistics of the cycle.

When talking after returning to Dromahair John spoke about the emotions he experienced when coming into Dromahair at the head of the group with his son Shane and daughter Caroline either side of him.

After two tough days in the saddle John said he thought about his late mother, in whose memory he had originally decided to do the cycle and conceded coming down the hill in Dromahair and seeing the welcoming committee cheering them on was an emotional experience.

It may be only a matter of days since the successful 2014 cycle came to an end but already there are whispers regarding next year’s event with some who were inspired by the efforts of those who completed this year’s cycle already expressing an interest in taking part next year. Given the manner in which the cycle has captured the imagination of many in just two short years, it appears as though it is set to continue to go from strength to strength.

The chosen charity for the cycle was Sligo Hospital Oncology Unit and all momnies raised go towards this worthy cause.

To view highlights of the final leg of the cycle visit simply visit - vimeo.com/103050051.