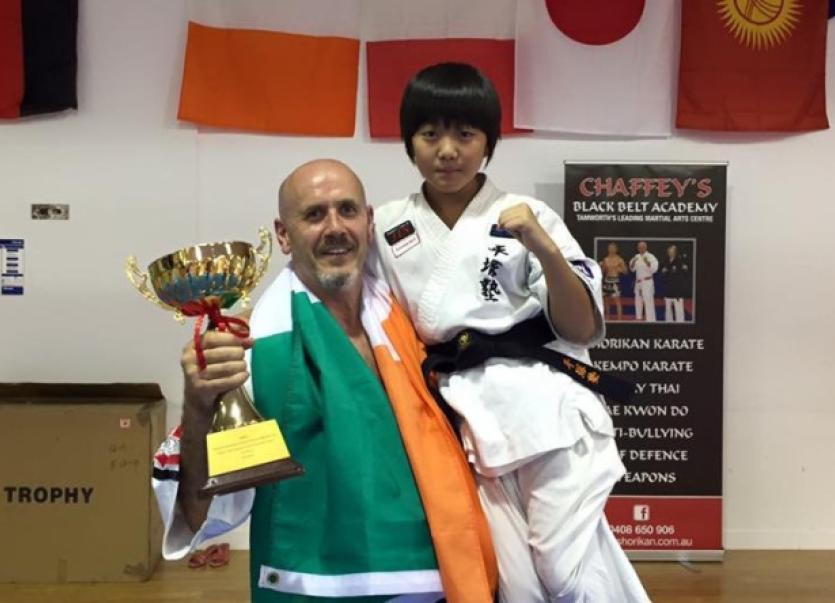 The 52 year old coach made a last minute decision to fight for Ireland at the Oceania World Cup and fought off a competitor 12 years his junior to lift the Heavyweight Over 82kg in the Over 35 Years Cup. Fighters from 17 countries attended and competed in the World titles in various categories and weight divisions at the competition.

Ciaran Mitchell introduced Koshiki Full Contact Karate to the UK and Ireland after training for ten years in Hong Kong. He is currently Head Coach of UK Koshiki Contact Karate and was charged with taking five fighters to this world cup on October 2, 3 & 4. Through various circumstances, the team dropped to one competitor in Lightweight.

Ciaran told the paper that in 2000 he went to the Sydney World Championships as part of the Hong Kong team, Nathan ‘Carnage’ Corbett was his coach and his Sensei was Sensei Pierre. Due to a foot injury Ciaran decided not to fight and this decision has “weighed heavily on me since the sudden death of my Sensei in 2008, as I felt I let him down by not showing more bravery at the time.”

He has been training hard this year in Karate, gym, Jujutsu and Muay Thai kickboxing “and felt really strong.” He said he wanted to fight under the Irish flag and knew if he didn’t do it now, he would never get another chance. So he asked his Grand Master Hanshi Histaka who was reluctant at first, but he saw the look of disappointment on Ciaran’s and eventually agreed. Ciaran was treated for Leukaemia in 2012 so does not regularly compete at this level.

Ciaran got to the World Final in his category and fought a 40 year old Australian karate and kickboxer. Ciaran won and as a result “put my demons to rest and made a few more dreams come through!”

Ciaran visits Cloone regularly to see his mother, his son Cathal is married and lives in Gortletteragh, the World Champion told the Observer he had the “joy of becoming a grandad to beautiful little Mia Lillie” and that event “outshines a world title!”