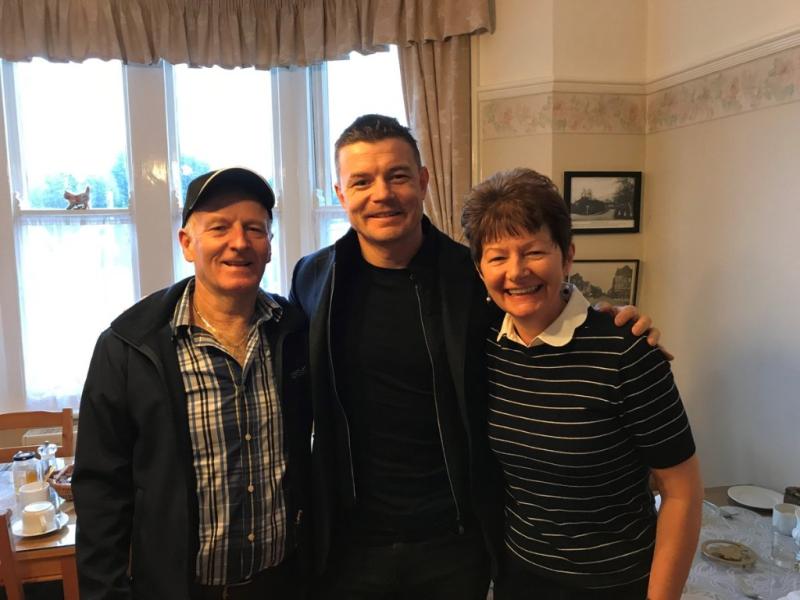 Ireland rugby legend Brian O'Driscoll has long had a fondness for county Leitrim, it was afterall where he and his wife Amy Huberman tied the knot in 2010 and last weekend he had another reason to be thankful for Leitrim hospitality.

Having basked in the excitement of Ireland's memorable win over England in Twickenham to secure the Grand Slam the bad weather in England and the east of Ireland meant the former Ireland captain was stuck in London for the night and there was a shortage of hotel beds available meaning O'Driscoll ended up staying with north Leitrim couple Mary and Joseph in their B&B, The Gable End Guesthouse.

In the immediate aftermath of the epic game the rugby legend was understandably so excited about Ireland's win that his difficulties getting home didn't seem quite so important.

Still trying to get home from an epic weekend in London. What a brilliant group of players this Irish team now has but their accuracy is something I’ve never seen before from a team in green. Well done to all involved.

Brian later gave his followers an update on his efforts to return home reporting that he had discovered a B&B in the Gatwick area where he was wonderfully looked after by his brilliant hosts.

Stayed in a B&B by Gatwick last night cos all hotels were booked in the area. Owned by a lovely Irish couple by the name of Mary & Joseph living on Church Road (legit)!

There was a huge reaction to the news that O'Driscoll had secured a room for the night with fans from close to home and around the world replying to the rugby hero.

That’s my aunts place they will be delighted to see this post. They are two gems

I don't want to live in a world where the greatest player of all time has to stay anywhere with less than five stars.

News of their new found online popularity quickly reached Mary who hails originally from Manorhamilton and Glenfarne's Joseph and they tweeted their thanks to the rugby legend.

We were very lucky to have the talented @BrianODriscoll staying with us at Gable End last night! pic.twitter.com/n7y3ya2D86

The story has an ending which illustrates why Brian O'Driscoll was so impressed with his Leitrim hosts in London as they thanked for him for his kind message.

Brian, thank you so very much for the lovely message and it was our pleasure to meet you. Joseph said it was just great to have one of the best Irish ruby player and gentleman ever to come out of Ireland staying with us. Warm wishes to all your family Mary & Joseph