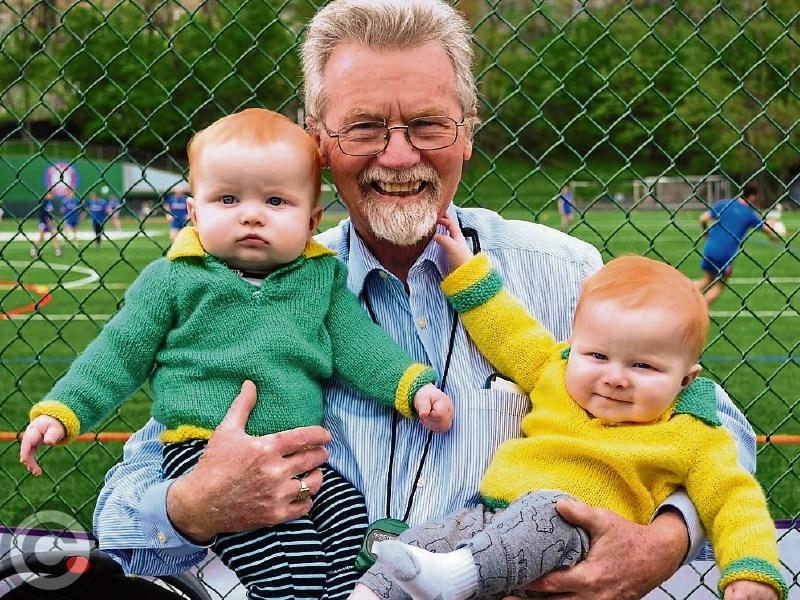 Manorhamilton’s Frank Brady was literally supporting the Green & Gold as he is pictured with his twin grandsons William and Owen in Gaelic Park. Photo Sharon Brady

They may have left it very, very late but when Noel Plunkett scored a dramatic match winning point to beat New York in Gaelic Park last Sunday evening, thousands of Leitrim hands went in the air in celebration all over the world.

In what must rank as one of the greatest communal experiences for Leitrim people all over the world, radios were on full-blast and social media followed as if lives depended on it as Leitrim footballers produced the goods when they mattered most to win Sunday’s Connacht Senior Championship clash against New York.

Incredibly the match united Leitrim people all over the world as nerves were shredded, novenas recited and heads buried in hands before Leitrim finally emerged with a one point win after extra-time.

The 0-19 to 1-15 scoreline barely reflects the drama of a game that saw a Jamie Clarke inspired New York rocket into a 1-4 to 0-1 lead inside the first ten minutes. Nor does it capture the Leitrim surge that saw them outscore New York eight points to one to lead at the break.

A tight and tense second half looked to have delivered a Leitrim win when Shane Quinn beat three players to score in added time but the drama got even better as New York forced extra-time with a late free and then surged three points in front.

With Leitrim fans in a state of nervous exhaustion and seemingly the rest of the GAA world willing on New York on social media, the Green & Gold looked dead and buried but like Lazarus, they rose from the dead with Aidan Flynn, born in New York himself, starting the revival with a point as he was falling, the ball bouncing off the post and over.

Two Darragh Rooney points followed to tie the scores before Noel Plunkett wrote himself in Leitrim GAA folklore, catching a New York kickout and then charging forward to fire over the match winning point.

Plunkett was naturally mobbed as New York were left devastated as they were a matter of minutes away from achieving their first ever Championship victory.

Victory naturally set off some wild celebrations for fans in New York but spare a thought for Leitrim's Oisin Madden who had to rush away from Gaelic Park to make a flight back to Ireland so that he could sit exams in the University of Limerick on Tuesday morning!

Not one to beat our own drums, consider the final words in our preview to the match last week - “It's going to be nail-biting, it might not even be pretty but an ugly one point win would do this writer. And when it comes down to it, I think Leitrim have the self-belief and talent to edge through.”

All we can say is that we should have put money on it!