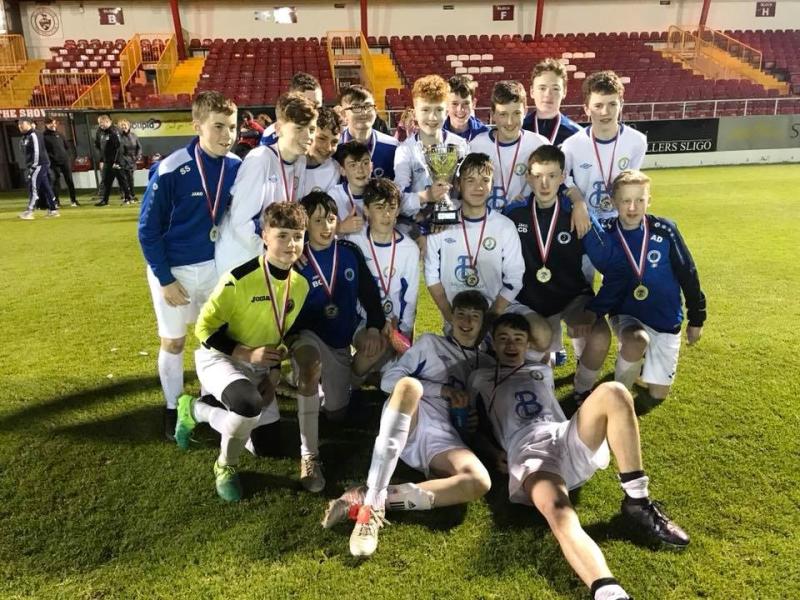 For the second time in as many days there was silverware returning to Manorhamilton yesterday evening as the Manor Rangers U15 team followed on from the success of the U16s a day earlier as they claimed victory over Benbulben FC in the league final which was played in The Showgrounds.

The opening stages proved to be very competitive, with Manor the setting the tempo early on. Diarmuid Giblin was the first to go close but he was denied by a fine save while Eanna Clancy's long range effort was easily dealy with the Benbulben goalkeeper.

Patrick Montgomery was next to go close for Manor after he blocked a clearance from the Benbulben goalkeeper and knocked the ball goalwards but his effort was cleared off the line by a defender.

While Manor were bossing matters, Benbulben also threatened when they attacked and Manor were grateful for the intervention of goalkeeper Ben Gavin to ensure the sides remained level.

The deadlock was broken with a moment of individual brilliance from Eanna Clancy who beat two defenders before applying a deft finish as he executed a wonderful lob over the Benbulben goalkeeper from all of 30 yards.

Manor continued to dominate matters when the game resumed but were also grateful to Ben Gavin who was at his best to keep his side's two goal lead intact.

Benbulben pulled a goal back and suddenly there was renewed belief among the Sligo players.

To their credit the Manor players responded well and came close to re-establishing their two goal lead but Patrick Montgomery saw his shot well saved by the Benbulben goalkeeper after a fine pass from Diarmuid Giblin.

There was to be no heroic comeback from Benbulben as Manor quickly regained control of proceedings and Diarmuid Giblin pounced from close range to regain the lead for Manor.