Manor Rangers' Aine and Lauren star for Sligo/Leitrim U12 girls 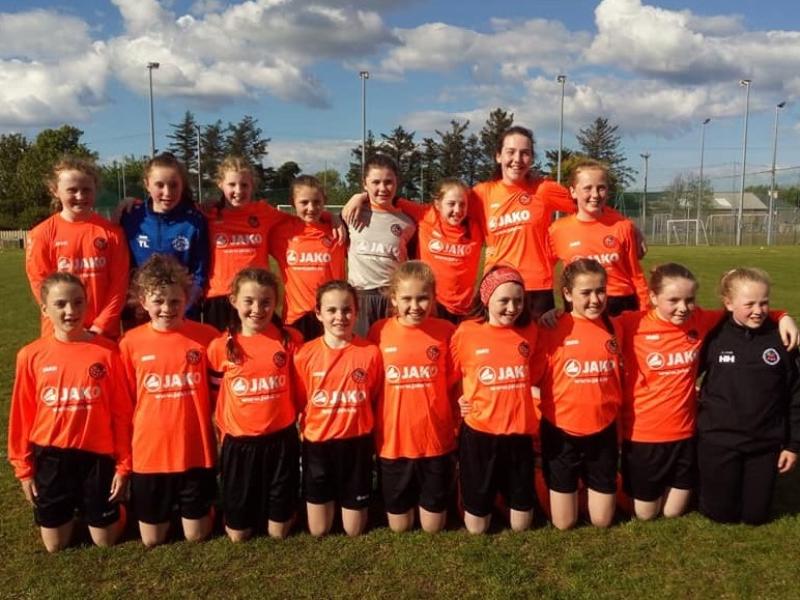 Sligo/Leitrim’s Under 12 Girls Emerging Talent squad were successful on Saturday last in winning their Regional Qualification Tournament to qualify to play in the U12 Inter-League Semi-Finals/ Finals in Limerick next month.

This is the second year in a row for Sligo/Leitrim to reach this level, finishing third overall in Limerick last year, and now in the top four nationally again, with the squad looking forward immensely to the trip to Limerick at the prestigious Gaynor Cup, where Sligo/Leitrim’s U14 & U16 Girls will also be competing.

The regional tournament, one of four held nationally last weekend was held in Carndonagh in north Donegal. The Sligo/Leitrim Girls first faced the Mid-Western (Roscommon area) League side. Sligo/Leitrim’s almost constant twin axis in midfield, Alice Lillie of Arrow Harps and Alannah O’Dowd of Boyle Celtic, scored two each and Manor Rangers’ Aine McLaughlin and Yeats United’s Jillian Monaghan supplied a goal apice off both wings for a convincing 6-0 win.

In their second group game Sligo/Leitrim faced a very strong Donegal League side, who having lost their opener to local side, Inishowen League fought all the way to the final whistle in this encounter. However, Aine McLaughlin’s moment of total commitment in the 13th minute of the game when she won a ball against the odds to create and score the game’s only goal proved decisive.

A magnificent game from Keeva Flynn of Kilglass/Enniscrone, one of the squad’s younger players, both at centre forward and later on the wing, helped enormously in this tough encounter, and all three players at the back, Captain Cara King of Real Tubber, Lauren Devaney of Manor Rangers, and vice-captain Anna Meade of Calry Bohs, along with Arrow Harps keeper Sarah Kiernan, saved the day on countless occasions.

That gave Sligo/Leitrim a maximum six points from their two games heading into their final group game against a well fancied Mayo side who were going well in the competition.

Sligo/Leitrim started the game well with plenty of pressure and Rachel McGoldrick of St.John’s  FC unlucky not to score early on a good break.

Anna Meade then delivered an inswinging left-footed corner which beat the Mayo keeper at the near post just eight minutes into the game and that proved to be the only goal of the game meaning both Sligo/Leitrim and Mayo progress to the final.

With only one place up for grabs in the U-12 Interleague Cup semi-finals at the Gaynor Cup (to be joined by the winners of three other regional tournaments), the final between these two good footballing sides was tight all the way.

Heroic efforts were made by players tired from three tough games in a row, and playing in sublime but hot sunshine which drained them further. In a tight game with little opportunity to run changes to a well-performing side it played out to a scoreless draw – with chances at both ends snuffed out by relentless defending all over the pitch. That brought it to a penalty shootout to decide the matter.

After the first five penalties it was 3-3 (Sligo/Leitrim hitting the bar twice, with both almost going in off the underside of the bar, and Mayo putting one wide and Sarah with a magnificent save on the fifthth to keep Sligo/Leitrim hopes alive). Those three scored by Keeva Flynn, Alice Lillie and Cara King. Sudden death then followed – a nerve-racking process for players, coaches and supporters alike.

It ran to 11 penalties each, Sligo/Leitrim scoring six sudden-death penalties in a row. Orlaith Scanlon, Sophie Quinn, Rachel McGoldrick, Eva White, Sarah Kiernan were all on target before Lauren Devaney dispacthed the nail-biting winner. Mayo missed with their eleventh effort – a tough way to lose for a team who had a great tournament.

Player-of-the-Tournament plaudits, by mutual agreement of the coaching staff, went to Alice Lillie & Keeva Flynn. Sligo/Leitrim now move into preparation for the finals of the competition in Limerick on June 23.

The successful management team of @SlyouthsO U12 girls. Next up the Gaynor Cup. Well done ⚽️⚽️ pic.twitter.com/2GLA2MXJ7b