Unveiling of 125-year-old map in Leitrim 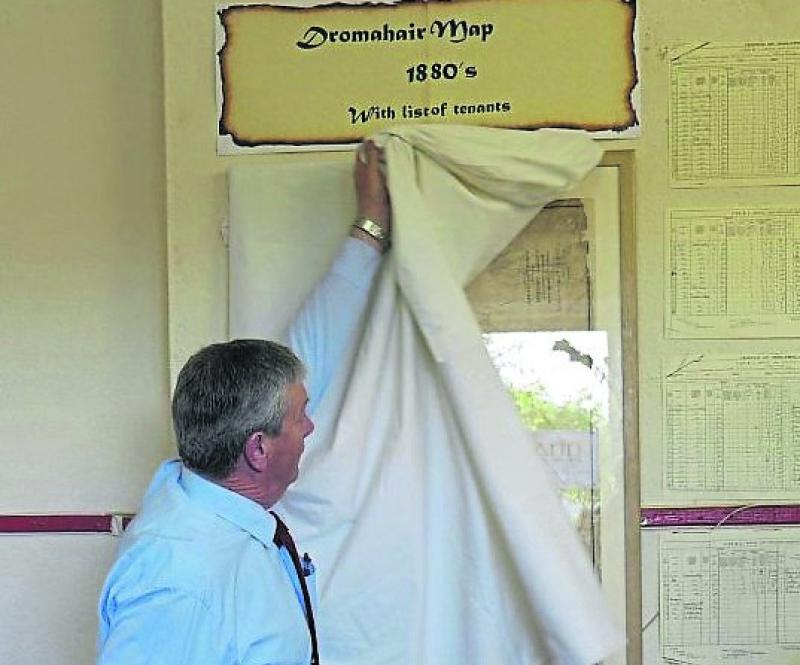 Dromahair Library has been given guardianship of a very unique map to be displayed for the local community.
The map is part of the Lane Fox Estate showing the village of Dromahair in the 1880s and it also contains a list of names of some of the tenants.
A large crowd attended a very special event in Dromahair Library on Tuesday evening May 22, which was held as part of Bealtaine Festival.
Speakers on the night were Councillor Frank Dolan, Chairperson of Manorhamilton Municipal District, who unveiled the map; Frank Quinn, Benjamin van de Wetering, Deirdre Fallon, Branch Librarian of Dromahair Library and Bríd Ní Dhonnchú of the Grúpa Oidhreachta (Dromahair & Area Heritage Group).
While working as an enumerator on Census 2016, Frank Quinn called to Gordon Rountree’s house. They were chatting and Gordon asked if Frank would be interested in looking at some old maps that he owned. One was a map of Dromahair that his great grandfather used whilst working for the Lane Fox Estate. Gordon intended to display this map somewhere in the village even though it was in poor condition. Frank offered to enquire what it might cost to restore it and who might fund the restoration.
Frank contacted Leitrim County Library as he believed it was important that the map stay locally. The library service agreed to fund the restoration providing Dromahair Library held guardianship of the map for the local community. The Ox Bindery from Tubbercurry were recommended to do the restoration as it was felt that Benjamin and Ineke van de Wetering had the expertise to do this type of work. When the map was restored, it was framed in specialised, protective glass.
The map predates the construction of the Catholic Church in1890, so it is at least 125 years old. It lists the tenants and owners of the properties in the village that were part of George Lane Fox Estate, all numbered and named. Many of those names are still familiar today – Fowley, Kelly, Stanford, McMorrow, Gilmore, McSharry, Hunt and others. At the unveiling event, huge gratitude was extended to Gordon Rountree by Library staff, members of the Dromahair & Area Heritage Group and the local community, for making this map available to the people of the area. It can be viewed during opening hours in Dromahair Library:- Tuesday 12.30 – 4 & 4.30 – 6; Friday 2.30 – 4 & 4.30 – 8. It is also planned that the map will feature during Seachtain Oidhreachta, National Heritage Week 18th - 26th August.