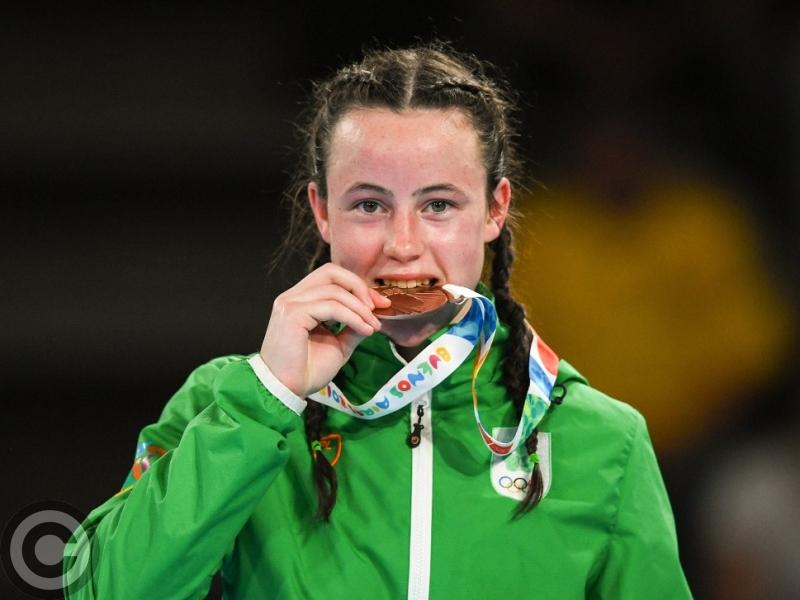 Déarbhla Rooney with her bronze medal. Photo by Sportsfile

Congratulations have been pouring in from all over Ireland for Glenade's Déarbhla Rooney in the wake of her bronze medal at the Youth Olympic Games on Wednesday evening in Argentina, including from Olympians and even a Dublin All-Ireland winning Gaelic footballer.

With social media such a feature of life today, reaction to Déarbhla's win has been swift and joyous with former Olympian and current Irish Amateur Boxing Association High Performance Director Bernard Dunne leading the congratulations.

A great couple of days for Irish boxing, winning 2 gold, 3 silver and 8 bronze medals at the European Junior Championships and then Dearbhla Rooney goes and wins a Bronze medal at the youth Olympic games. Huge congrats to all involved. #TeamIreand

The footage of the Rooney family celebrating in the stands also got a lot of comment:

Former Leitrim footballer and a Glencar/Manorhamilton clubmate of Déarbhla's tweeted:

What a great achievement from this lady. https://t.co/wwlT6hfgRO

Even Love Leitrim got in on the act:

Over on the Leitrim Observer Facebook page, the response was just as delighted with Martha Morris of Déarbhla's own Sean McDermott Boxing Club in Manorhamilton writting:

Darren Kerrigan summed up the feelings of a lot of people when he wrote:

Glencar/Manorhamilton Ladies were very proud of their team-mate:

Finally, from the Leitrim Observer: