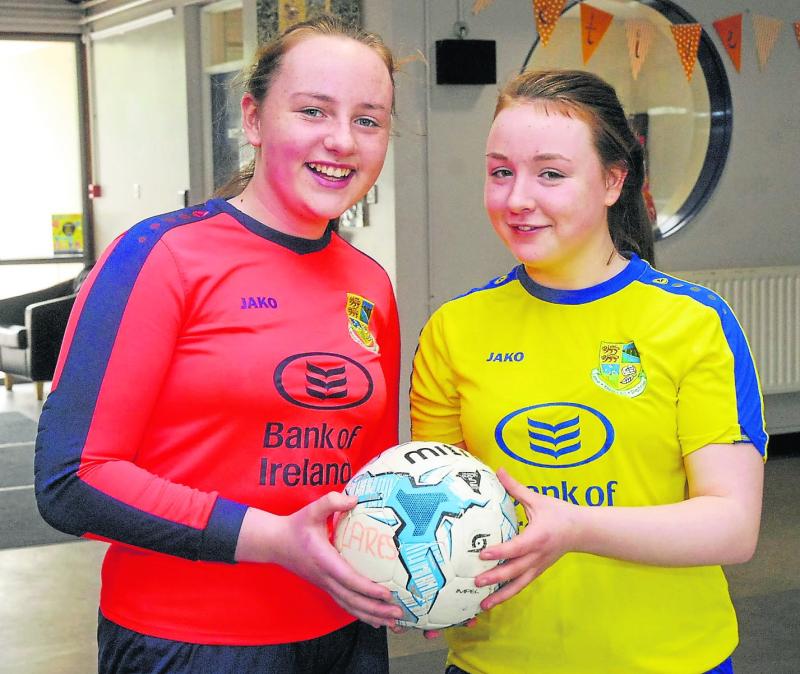 It has already been a hugely successful year for the sports stars from St Clare's Comprehensive School, Manorhamilton, but there is a hope that even better is still to come as the school prepares for next week's Junior B National Cup Final against Killina Presentation from Tullamore.

Team manager Niamh Gallagher is full of praise for her players and how they have performed on their march to the final which will be played in Athlone Town Stadium on Wednesday, February 27 [ko 1pm]. They have already claimed the Connacht title and in doing so knocked out the defending champions.

With the girls already bringing a gaelic football Connacht title back to Manorhamilton Niamh is delighted with the success they are enjoying and was quick to downplay her role in the team's success, preferring to attribute their success to the players and the vocal support they have been receiving.

“The girls are just phenomenal. They work so hard and if you look at the players in the team they have Connacht titles, All-Ireland titles. They are doing really, really well.

“The support we are getting, when we bring girls to the games and bring supporters they are cheering the girls on and the support helps them, it really does.”

Niamh agreed the success enjoyed by the girls in various codes is a great reflection on the school but was again quick to pay tribute to her players and students rather than take the credit herself.

“It really is a great achievement and I am delighted to only be a part of it. I don’t do very much really to be honest. It’s them that work and they do the job.

“We have some standout girls,” she acknowledged. We have our captain Muireann Devaney, she is excellent and we have Hannah Johnston and Leah Fox and they all work really, really well together.

“They do the work themselves and they have been working hard all year.”

Team captain Muireann Devaney will be known to anyone in Leitrim with even a passing interest in sport and Niamh was quick to pay tribute to her role not just as a player but also as a leader.

“As a captain she is phenomenal. She leads the girls when she is out there; she is a real leader. She shows that on the pitch and then she comes off and no matter what happens, win, lose or draw she is very composed. It is great to see that in such a young player. She takes it in her stride and all of the girls do which is great.”

Attention has now well and truly turned to next Wednesday's All-Ireland final and while research has been done into what they can expect from Killina Presentation, Niamh insisted she and the players won't be altering too much from the preparations that have seen them progress to this stage of the competition.

“We have kept it the same. We have tried not to build it up too much, we’re just trying to see it as another game and see how they get on. They are well capable. We have read up about the other team and our girls are just as strong so we will see how we go.”

The Offaly school claimed Leinster glory after a dramatic encounter with St. Laurence College in which they emerged 3-2 winners after a penalty shoot-out to advance to the national stage.

Killina won the U-15 national title last year and the Offaly school come into the final in a rich vein of form having defeated St Peter’s CS from Passage West 3-0 in their recent semi-final.

Ava Dolan and Emma Hand were rock solid at the back for Killina with goals from Sarah Doyle, Becky Watckins and Ava Dolan securing their place in next Wednesday's decider.

Aware that her side are in a for an almighty challenge Niamh said: “We’re expecting them to be good. We expect them to start off quickly and we will be aiming to do the same and we will just push on and hopefully be on the right side of the result.”
However, with a Connacht title in the bag and having already defeated the defending champions Niamh insisted her side won't be focussing too much on their opponents and believes if they make a positive start to the final there is no reason they can't emerge victorious. There is a healthy confidence within the St Clare's ranks that an All-Ireland title could be on its way to Leitrim.

“We have nothing to fear, we really don’t,” she insisted. We started poorly in a lot of games but then the last few games we have been much, much better so we will push from there and hope for a good result.”