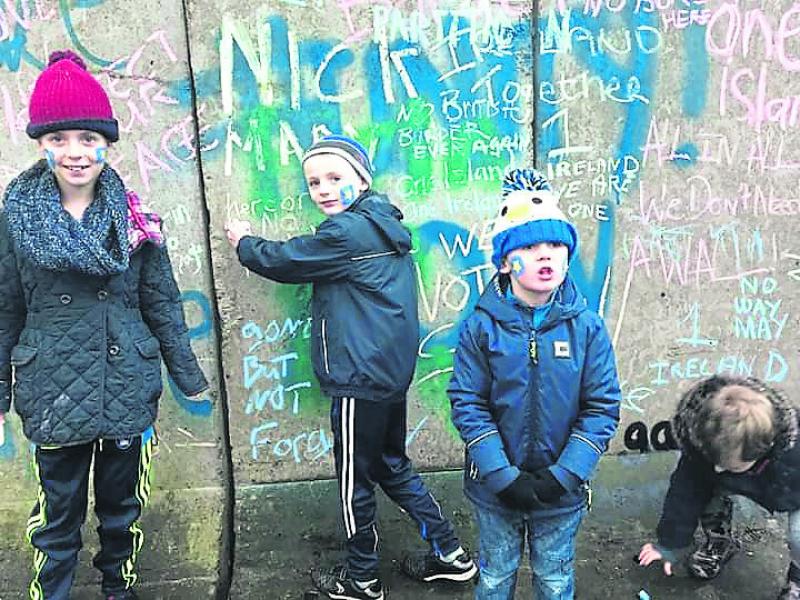 Aoife, Paraic and Neil McGenity are pictured with the 'wall' erected on the old Dublin road to Newry ealier this year as part of a BCAB protest

We are literally counting down the days until Brexit and, with no agreement yet reached, there is a growing fear that a no-deal exit for the UK is all but inevitable.
Last Monday, March 4, Border Communities Against Brexit (BCAB) launched a declaration and confirmed dates for a series of protests along the border for March 30, a day after the UK is set to exit the European Union.
Leitrim BCAB spokesperson, JJ O'Hara, said “every pressure” has to be brought on the EU and the UK to ensure that the rights of those living on the island of Ireland were respected.
“We are facing a situation where a no-deal Brexit is becoming more and more likely. We are going to London and we are also going to Europe to try and ensure that a hard border does not return to Ireland.”
A statement issued by BCAB noted that the organisation has “decided to create a declaration that all pro-remain and campaign groups can sign up to, so we all can send a very clear message to Westminster, Dublin and Brussels regarding the affects of Brexit upon our lives.
“It is vitally important at this very crucial time our collective voice's are heard.
The declaration calls for:
1. No hardening of the border by implementing the backstop.
2. The preservation of the Good Friday Agreement.
3. To continue EU representation (for those in Northern Ireland) to ensure protection and standards for citizens rights, employment, environmental and social rights.
4. Continued access (for Northern Ireland) to EU funding programmes including PEACE, CAP, Erasmus+ and Interreg.
On March 12 the UK parliament is set to vote on an exit deal. If this deal fails to get support then a vote will be held on whether the UK will exit with no-deal on March 29.
If the majority of members vote against exiting with no deal, a third vote will be held on March 14 to consider delaying Brexit by extending the timeline for Article 50.
At this point it will be either a case of leaving on March 29 without a deal or approaching the EU to seek an extension of time in which to secure a Brexit deal.
There is no guarantee that, even if the UK parliament votes in favour of an extension to Article 50, the EU will actually grant an extension.
“Everything is very much still up in the air,” said Mr O'Hara.