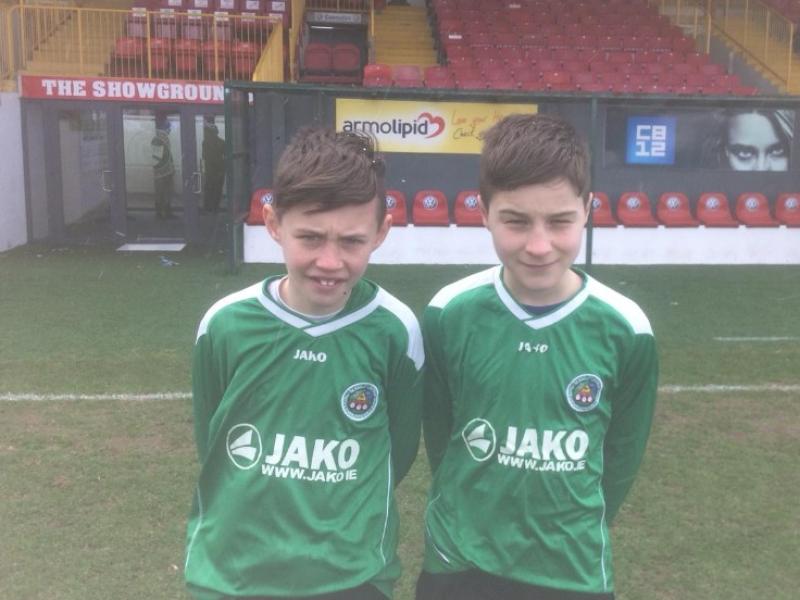 Peter Moran (Carrick Town) and Jack Kelly (Manor Rangers), who have been selected in the Sligo/Leitrim squad for the forthcoming Sligo Super Cup.

Two young Leitrim footballers are gearing up to take on some of the best academy soccer players in Ireland and the UK.

Manor Rangers defender, Jack Kelly and Drumsna’s Peter Moran, who plays in midfield for Carrick Town, have been selected in a 16 strong Sligo/Leitrim squad for the forthcoming Sligo Super Cup, an elite under-12 tournament which takes place at Sligo Showgrounds from April 26-28.

The prestigious tournament, now in its third year, will feature high profile UK academy teams such as Leeds United, Derby County and Aberdeen, while the Dublin & District Schoolboys League, regarded as the biggest soccer academy in Europe, is returning to defend the title it has won in the previous two years.

Other participants include Glenavon from Northern Ireland, the Mayo League and the Donegal League.

In all, there will be sixteen games over three action-packed days. Thanks to substantial funding from Sligo LEADER and the Sligo Business Improvement District (BID), eight of the games will be streamed worldwide on the internet, while there will also be a Match of the Day type highlights pakage each evening.

The official launch of the tournament and the draw for the round-robin group matches will be broadcast live on Ocean Fm from 8-9pm on Thursday, April 4.