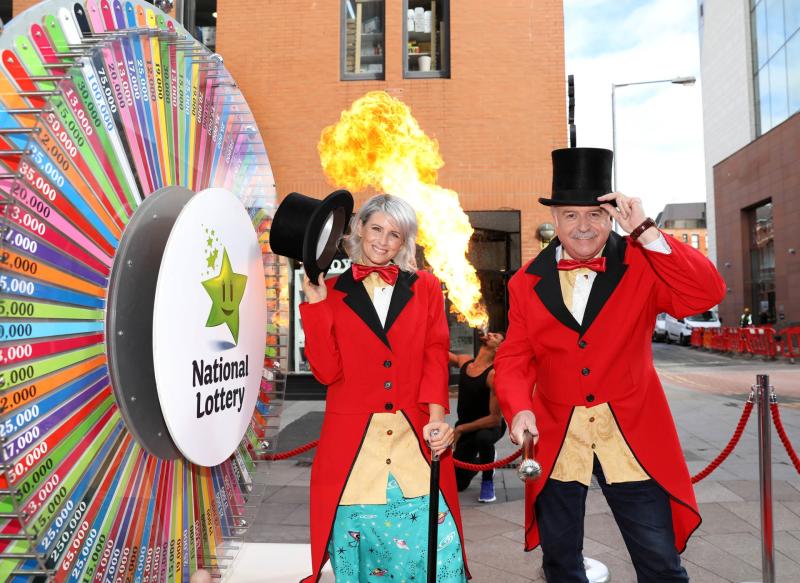 Hosts, Sinead Kennedy and Marty Whelan are all set for Winning Streak this Saturday.

A Leitrim-based school teacher will be hoping to do her dad proud when she appears on his behalf on the National Lottery Winning Streak TV game show on RTÉ One this Saturday (6th April).

Fidelma Fox, originally from Ballyconnell in Cavan but living in Killough, Co Leitrim for the last 20 years, says she can’t wait to appear on the popular game show representing her dad, George Rea.

Fidelma, who teaches second class pupils at St. Clare’s National School in Manorhamilton, has been married for 18 years to Peter and the couple have two children, Oisin and Emer, who are looking forward to traveling to Dublin to cheer on their mum on!  Her pupils have been busy this week making her a massive good luck banner.

She was on the way home from visiting her Dad when she got calls to say his name had been drawn to appear on Winning Streak. George, who has been married to Nora for the past 57 years, nominated his daughter to represent him on the show and is looking forward to cheering Fidelma on from the audience in RTE this weekend alongside Fidelma’s brother Adrian.

The Winning Streak National Lottery game show, co-presented by Marty Whelan and Sinead Kennedy, will be broadcast this Saturday evening at the earlier-than-usual time of 19:30 on RTÉ One.