Manorhamilton teachers wins €30,000 for her father on Winning Streak gameshow 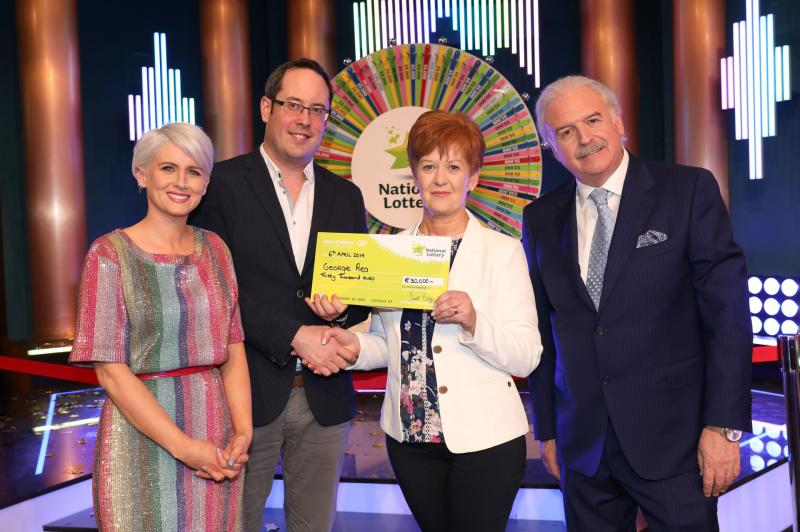 A Manorhamilton teacher made her dad proud when she won him €30,000 on the National Lottery Winning Streak TV game show, on RTÉ One, last Saturday, April 6, 2018.
Fidelma Fox, who lives in Kinlough went on Winning Streak in the place of her dad, George Rea, Ballyconnell, Co Cavan.
Fidelma lives in Kinlough with husband Peter. They have two children, Oisin and Emer who were excited to travel to Dublin to cheer on their mum on TV!
They aren’t the only children who are keen to see Fidelma, or ‘teacher’ as she is better known at St Clare’s National School in Manorhamilton, where she teaches second class.
Her pupils were busy last week making her a massive good luck banner which was shown on the TV programme.
Fidelma was on the way home from visiting her dad in hospital when the calls came through to let her know that George was drawn to appear on the show.
George has harboured hopes of getting on Winning Streak for a long time but has been in hospital for the past couple of weeks. However, watching his daughter on RTE last weekend has given him a great lift and he is on the road to recovery.
George is married to Nora for the past 57 years and Nora cheered Fidelma on from the audience in RTE this weekend alongside Fidelma’s brother Adrian.