Juno and the Paycock in Kiltyclogher 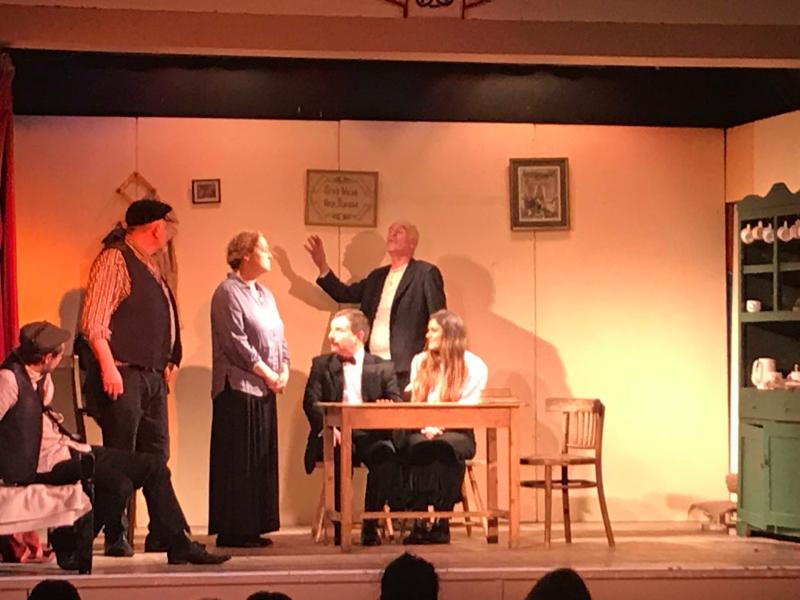 Juno and the Paycock in Kiltyclogher

All roads lead will lead to Kiltyclogher Community Centre this Sunday, April 28 when the Grange Players take to the stage and perform Juno and the Paycock.

This is a play written by Sean O Casey and is a highly regard performance. It is set in the working class tenements of Dublin in the early 1920s during the Irish Civil War period.  This Drama group have already performed to packed houses at the Hawks Well, Grange and Calry.

Marie Lowe (Juno) is playing her first big part in a play. She loves trying to portray a different and hard life in a troubled Dublin in the 1920’s as Juno.

Jacinta Sexton (Mary Boyle) is a newbie to Grange Players.  Mary is the daughter of Captain Boyle, and Jacinta really suits the part.

Ryan Carroll (Johnny Boyle)has a great future in front of him as a actor! This is Ryan’s first play and he really nails it.

Joe Mc Gorrin, (Jerry Devine) has being involved with the Grange Players for 4 years now, this being his 3rd play with them.

Antony Brennan (Captain Boyle) is no stranger to the stage, from when he first played the role as the Bull McCabe in The Field.

Niall Hever (Joxer Daly) has been in many productions and has been involved with the Grange Players for many the year. As recently as St Patrick’s weekend, Niall travelled to London with the Cliffoney Players with their production of Turning Mammy.

Brian Gallagher (Bentham) started acting in 2006 with the Lough Gill Players. He has been involved in a number of productions, including most recently  The Importance of Being Ernest, where he played Algernon Moncrief. And he has been involved with the Beezneez production of Lovely Leitrim.

Gerry Sheerin (Needles Nugent) is embedded in theatre in North Sligo, playing the part of Needles Nugent, and after making several suits for captain Boyle, he’s not best pleased when he doesn’t get payed.

Tina Gilmartin (Mrs Tancred)  is one of the longest serving members of the Grange Players. Her experience both on and off stage is valued and appreciated by us all.

Ursula Delaney (neighbour) is no stranger to the stage, and like Sarah, lives in Calry. As Mr Tancred’s side kick, her presence both on and off stage is a joy.

Director Paddy Davis has brought his own stamp to this production with his unique vision, and the way he moves this play makes it very enjoyable to watch. Paddy is standing in for Dillon Mc Gloin as the Leaving Cert is fast approaching, and Dillion cannot be with us in this run.

Door open at 8pm, admission €10.  We look forward to seeing you all in North Leitrim’s finest theatre.