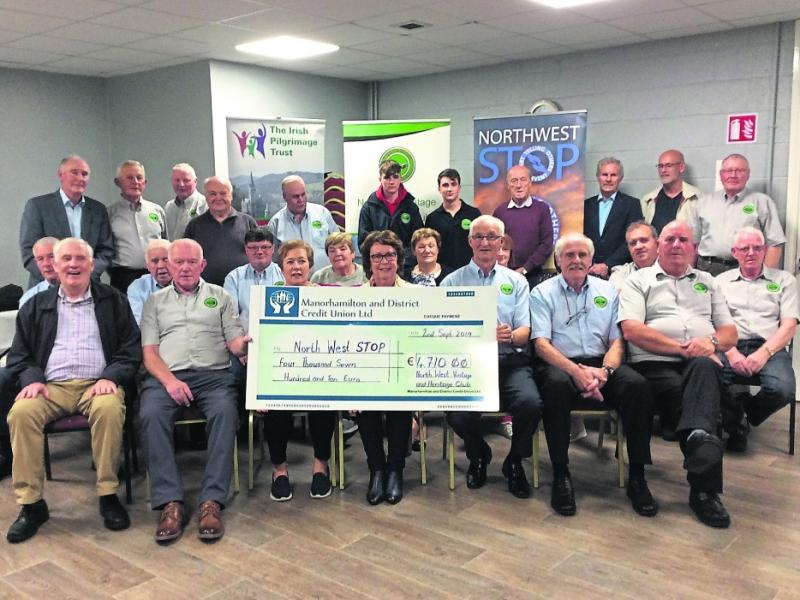 Presentation of a cheque for €4,710 by the North West Vintage and Heritage Club members to North West STOP on Monday night week in the Bee Park Community Centre

Two very worthy charities, North West STOP and the Irish Pilgrimage Trust, were each the recipients of cheques for €4,710 when the annual North West Heritage and Vintage Club charities presentation ceremony took place in the Bee Park Community Centre on Monday night week.

Over the past ten years the North West Heritage and Vintage Club has raised a staggering €112, 000 plus for several charities. The Club members fundraise for charities by promoting an Autojumble event every year in Manorhamilton and by running a draw in conjunction with it.

“We also purchased a defibrillator for the Club to be on the safe side even though all our members are in good health but we aren’t taking any chances. Acquired Brain Injury Ireland was another charity we have supported in the past ten years as well as Epilepsy Ireland, Chernobyl Aid Ireland, Our Lady’s Children’s Hospital in Crumlin; while there was a once off local charity that we supported as well, and tonight the Irish Pilgrimage Trust and North West STOP.

“In the ten years since the Club was founded we have raised over €112,000 for charities throughout the length and breadth of Ireland and we all still enjoy our Heritage and Vintage Club hobby.

“What we do every year is that several charities are nominated; the names of which are all put in to a hat and then we pick two. So this year I want to thank Club members John Clancy, who nominated the Irish Pilgrimage Trust, and Jim Joe Flynn, who nominated North West STOP.”

Glencar woman Mary Clancy who received a cheque on be half of the Irish Pilgrimage Trust said the “Trust provides holidays for children and young people with special needs in Lourdes and Ireland.” It does this through Easter pilgrimages, Friendship Weeks and Hosanna House Weeks.

Meantime the Irish Pilgrimage Trust has two houses in Ireland; one in Clarinbridge in Galway – Kilcuan sleeps 30 people, and the other house is near Rosslare Harbour in Wexford – Cois Cuain sleeps 17 people.

Mary Clancy explained that “both houses have been paid for by fundraising. The guests we bring to Lourdes at Easter have a physical or learning disability or an illness or for any other reason recommended by a school or training centre (aged 11 to 30).

“Seriously ill children up to 11 years old with a parent or guardian in the family group (go to Lourdes also).” Mary Clancy also said that she has application forms and the Irish Pilgrimage Trust also has them for the Easter 2020 pilgrimage to Lourdes, for which the closing date is October 31, 2019.

Regarding this year’s pilgrimage to Lourdes Mary says that “375 guests went Lourdes and 680 carers which included nurses, carers, chaplains and doctors. They all paid their own fare of €675 and gave up a week of their holidays to care for the special needs guests in Lourdes and they gave their families at home a week’s respite. 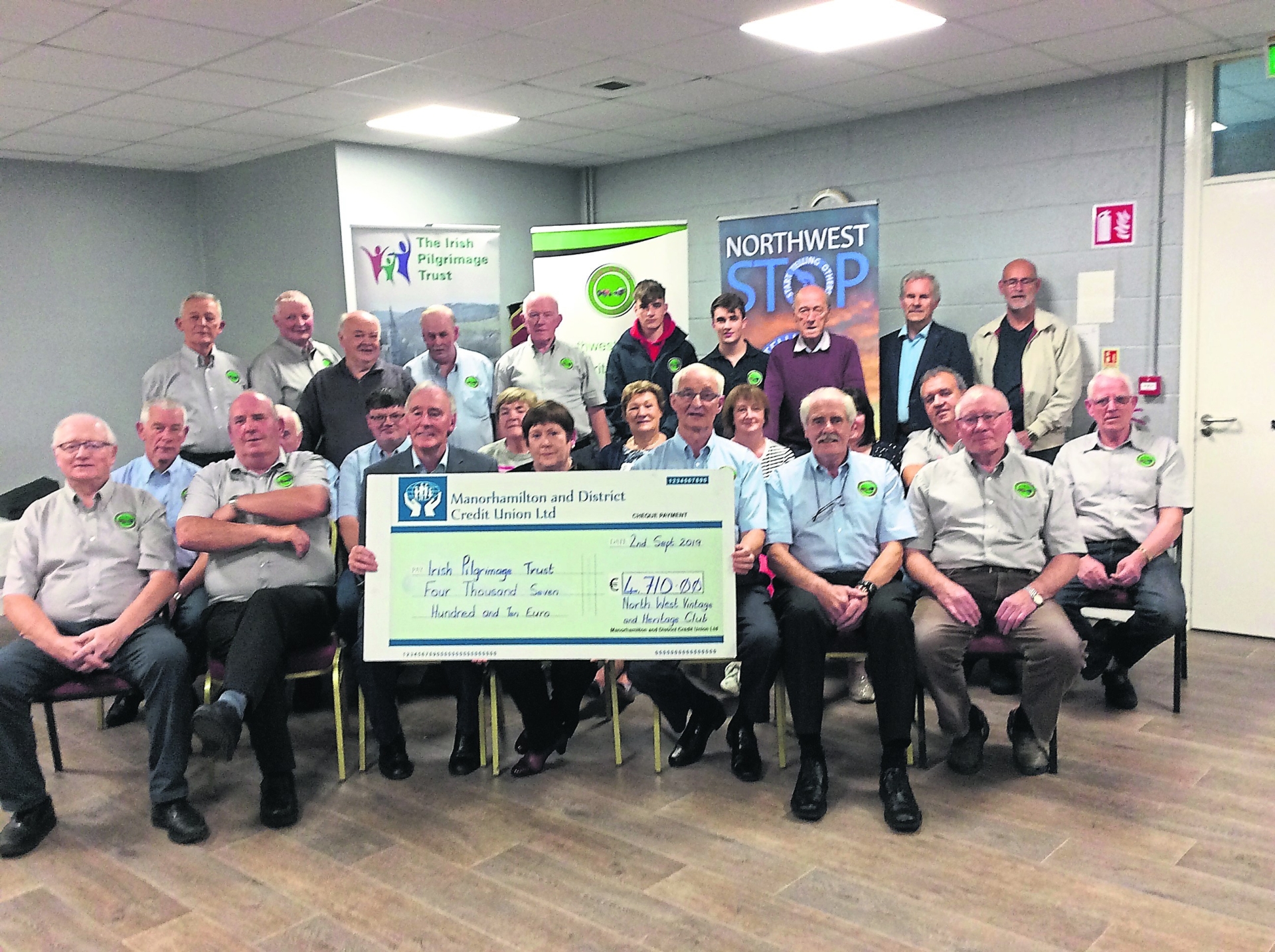 “The Friendship Weeks in Kilcuan and Cois Cuain had 64 guests and 111 carers. The Hosanna House Groups who go to Lourdes during the summer had 53 guests and 124 carers.

“The Hosanna House groups are for older special needs people (65/70). Hosanna House is owned by our sister organisation, the English Trust and it sleeps over 80 people.”

“The monies raised (by the Irish Pilgrimage Trust) go to the people with special needs. Carers pay their own fares” Mary Clancy said in conclusion. A cheque for €4,710 was also presented to North West STOP on Monday night week.

It was received by the local based suicide prevention organisation North West STOP representatives Ita McTernan and Deirdre O’Hagan. Ita said “I want to say a huge thank you to each and every one of you for the efforts you have made over the years for all the different charities.

“On behalf of North West STOP, I want to say a big thank you because the money we are receiving tonight will give almost 120 hours of counselling. Now that’s a big contribution. That’s my calculation from my mobile phone calculator app.

“Our counsellors will see individuals in what ever area they wish to be seen. It is all confidential. Our big spends are on insurance and renting rooms where the client wants to be seen. We leave it to them.

“If they say they want to be seen in Ballyshannon, we get a counsellor to go to Ballyshannon and the person will be seen in a room we pay for. They are seen there and it costs them nothing – they get free counselling.

“Every penny locally goes directly to North West STOP. All our volunteers that work with us get no money, no travelling expenses or any other expenses. We just do it out of the goodness of our hearts.

“They (the counsellors) help people that need help. Believe me – there are a lot of people out there who are getting help from us. Because we are confidential we are not going to say anything more in this regards.

“In our office (in Manorhamilton) we have numerous cards and letters telling us of the good we have done for people by seeing our counsellors. We got one note today saying ‘I wouldn’t be alive only for your services, please keep going.’

“Thanks a million are extended to everyone. I want to compliment everybody for all the money they have raised for the different charities that Tommy (Flynn) mentioned here tonight. It is brilliant. Thanks again and best of luck to the future” Ita McTernan said in conclusion.