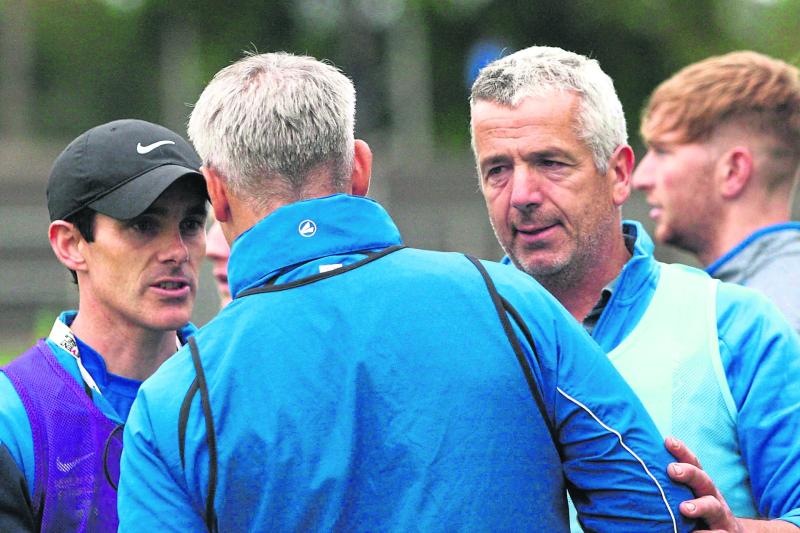 Incoming Club Chairman, Kieran Sheridan informed the recent Glencar/Manor AGM, December 13 in the Bee Park Community Centre that the 2019 Leitrim county final winning joint senior team managers, Shane Ward and Kieran Fox would not be continuing in their roles in 2020.

Praising Shane and Kieran for their excellent management of Glencar / Manor, as well as exceptional level of success they achieved, Kieran Sheridan added that the Club’s incoming executive would endeavour to have a new senior team manager appointed as soon as possible.

Meantime in her annual report to the Club’s AGM, outgoing Secretary Phil Flynn, who did not re-election, highlighted many of terrific successes that were achieved in 2019 by the Glencar/Manor GAA Club.

She advised the attendance of about twenty members to “take a breath after a captivating 2019. Our 50th anniversary year was always planned to be special but it definitively exceeded our expectations.

“Every sector of Glencar Manor put their shoulder to the wheel at the start of this year and the results at the end will ensure that this year will be one of the most memorable years yet.

“Leitrim Senior and Junior ‘A’ county football champions; an All-Star nomination (Gavin O’Hagan Lory Meagher Cup); achieving Healthy Club status; hurlers and footballers representing the Club for Leitrim in Croke Park; multiple county final outings; official opening of the facilities at Boggaun and Leitrim Sports Partnership Club of the Year to top it all off.

“The Golden Jubilee celebrations took place on the August Bank Holiday weekend with the official opening of our facilities in Boggaun, along with our Golf Classic and the launch of the History Book.

“The weekend was a success but for the weather. The Club also honoured the 1st Executive Committee and the 1969 Team who won the (Leitrim) Junior League, the first title in the Club’s history.”

Phil’s report stated, “The League commenced in April and we had played 10 rounds by July with the final game scheduled for October 20th. We won 6 games, lost 3 games and drew 1, and shared the points for the final game –v- Fenagh. The Club finished 5th in League Table. The League final was won by Mohill.

“Final – v – Ballinamore SOH – Wrote off by many in the build-up; our boys came into the game determined and focused to put all the bad experiences of finals in recent years to bed.

“The game was played on 13th October with a massive crowd in Páirc Sean. Some would say lucky thirteen and it was just that for our Club. We all celebrated together at the final whistle and we took the Fenagh Cup once more back to Manorhamilton.

“The team was captained by Conor Dolan who lifted the Cup on behalf of the panel of 27 players and management pack of Shane Ward, Kieran Fox and Patrick McMorrow.

“I would also like to congratulate Conor Dolan who has been named ‘Leitrim Senior Club Player of The Year’ for 2019.” Phil Flynn also provided a detailed account to the Glencar/Manor AGM on the Club’s 2019 Leitrim Junior ‘A’ football championship winning side’s campaign.

Ms. Flynn noted “in the League we were unsuccessful. We lost 8 games, drew 1 game, and conceded 2 games. It was difficult for the players playing at Division 2 level again this year.

“It is hoped that the new re-structuring of the leagues and championships will help with more competitive games in the future for our second team. It is also hoped that players will participate more consistently going forward into 2020 and that all fixtures can be fulfilled.

“The (Leitrim Junior ‘A’) championship campaign started on 28th July. Our group consisted of Mohill and St Mary’s. We lost our first game to St. Mary’s but had a comfortable win against Mohill and it sent us through to the quarter finals.

“We had a good win over Carrigallen in the quarter final under lights in Cloone. We played Gortletteragh in the semi-final. This was a tough physical battle but the players worked really hard and prevailed in the end.

“Annaduff were our opponents in the County Final and we knew this was going to be tough. The game was played on Sunday, 28th October in Páirc Sean. The first half was close and a really physical encounter but the players dug in and pushed on in the second half to see them to victory.

“(It was) another championship for Glencar/Manor for 2019, lifting the Dick Ellis Cup, captained by Ronan Flynn. A big thanks in particular to Patrick McMorrow for managing this team all year.

Without his guidance this team would not have been successful” Phil stated in conclusion. The Glencar/Manor Junior ‘A’ team selectors were Shane Ward and Kieran Fox.