School secretaries to strike on Friday 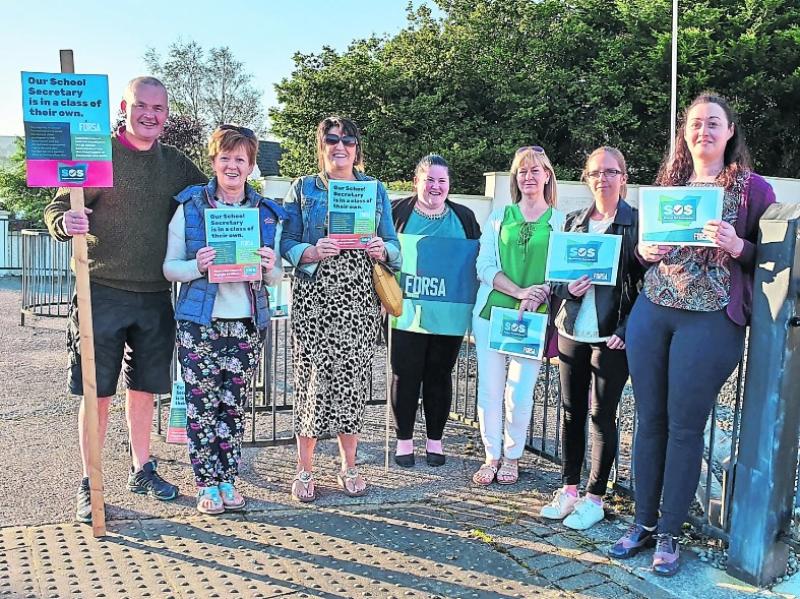 There has been an escalation of industrial action by school secretaries with a one day strike called for this Friday, January 10, the first week back from the school break. This will be followed by a withdrawal from all work on public service systems and local databases.

At a meeting last Saturday in the Forsa union offices in Dublin, some of the details of the action were clarified, and following the meeting, all marched down to the Department of Education and Skills offices in Marlborough Street to mark the start of their action.

Frank Considine from St Clare’s PS in Manorhamilton and Largy NS, Kinlough, and all other school secretaries were full of optimism as their Forsa negotiating team entered into discussions under the auspices of the Workplace Relations Commission with the Department of Education and Skills and employers representatives, certain that the New Year of 2020 would bring a final resolution for them, and equal recognition as their DES 78/79 colleagues, of Grade 3/4 Public Services pay-scales and terms and conditions.

“With such enormous enthusiasm right across the country following the rousing debate in the Dáil at the end of October, and Minister Joe McHugh’s firm commitment to school secretaries, how sickening it was, to learn only the week before Christmas, that talks had broken down as a result of the derisory and insulting offer of simply a percentage increase in their rate,” said Frank.

“For so, so many, a 1.5% increase of nothing was still nothing. It did not pretend to address the core issue of equality for all, and the final end of this ‘national disgrace’, as described by so many TDs that afternoon in the Dáil.

“Forsa had no choice other than to leave and call on members to step up their campaign,” explained Frank.

Frank will be demonstrating outside of St Clare’s PS on Friday morning, and is looking forward, as on the one hour’s demonstration last year, to welcoming his fellow colleagues, parents and friends who are able to join him in the morning.

Frank will then be joining dozens of more school secretaries and their supporters at a rally outside Minister McHugh’s constituency office in Letterkenny at 1pm that afternoon.

The withdrawal of all work on public services systems and local databases will have a much more significant impact.

“The routine operations of the school, along with, for example, substitutes salaries in particular, will be hugely impacted, and with the INTO promising that their members will not interfere in any way, it is sincerely hoped that the Department will very quickly realise that school secretaries mean business this time.

"We will seek to return to negotiations with a genuine resolve to conclude them properly, and quickly, and thereby minimise the serious disruption the withdrawal of labour is sure to cause a great many others,” said Frank.