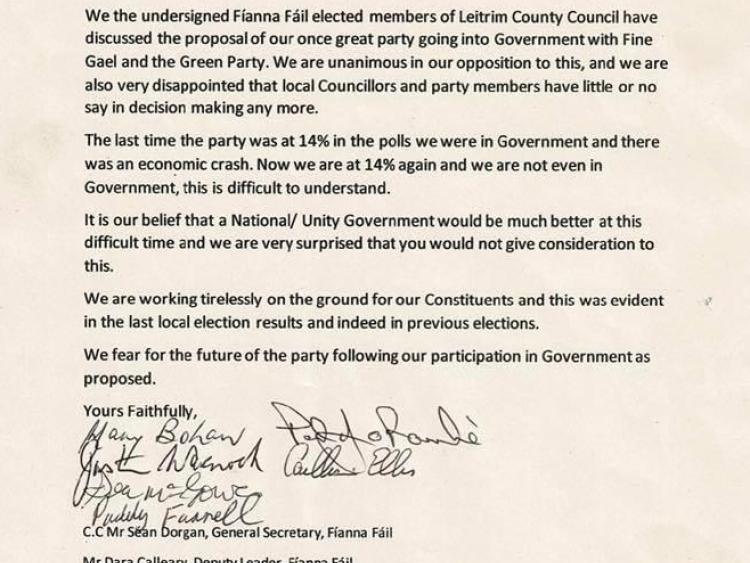 The letter sent to Michaél Martin

On Monday last news broke nationally that apparently 50 councillors from Cavan, Clare, Cork, Donegal, Galway, Kerry, Kildare, Leitrim, Louth, Meath, Sligo, Tipperary, Waterford and Wexford were joining 1,000 Fianna Fáil members in launching a campaigning group, Fairer Future, to defeat the Programme for Government negotiated by Fine Gael, the Green Party and the leadership of Fianna Fáíl.
However Leitrim's Fianna Fáil councillors, while acknowledging their opposition to entering Government with Fine Gael and the Green Party remains unchanged, stress they have not signed up as part of the Fairer Future campaigning group.
Cllr Mary Bohan, the longest serving Fianna Fáil member on the council, told the Leitrim Observer that “we (Leitrim's Fianna Fáil councillors) haven't signed up to anything or any organisation, nor have we been asked to. What we are still doing is continuing to support what we said in a letter we sent to Micheál Martin outlining our opposition to Fianna Fáil entering Government with Fine Gael and the Green Party”.
On May 29 last the county's six Fianna Fáil councillors: Mary Bohan, Justin Warnock, Sean McGowan, Paddy Farrell, Caillian Ellis and Paddy O'Rourke, sent a letter to party leader, Micheál Martin TD outlining their opposition to plans for the new coalition.
In the letter they said: “we are unanimous in our opposition to this, and we are also very disappointed that local councillors and party members have little or no say in decision making any more.”
The local councillors expressed their belief that a “National (or) Unity Government would be much better at this difficult time” and expressed their fear for the future of the party if it proceeds with plans to enter into government with Fine Gael and the Green Party.
“Our position on this hasn't changed from what we said in this letter,” Cllr Bohan explained this week.
Cllr Sean McGowan acknowledged that he and his fellow councillors would be happier “if there was a Unity Government in place” .
“We wrote to our leader on this and we still believe that would be the best option going forward especially in light of the Covid-19 (pandemic) and the impact this has had and will have on our country,” he said.
Cllr McGowan said he had yet to read the draft Programme for Government in its entirety but said that any vote on this will be a “personal matter” for each member.
Cllr Caillian Ellis expressed his disappointment at the proposed formation of the new Government adding “Fianna Fail has been sold out for power. It's all about power and jobs for the boys”.
He said the current situation was “very disappointing” for members and said he had real concerns about the impact of the proposed coalition on the party and on rural Ireland.
Cllr Paddy O'Rourke pointed out there were some “very difficult decisions to be made in the coming years” and this would best be served by a National or Unity Government.
He noted that, in the recent General Election three parties had secured roughly the same amount of the vote, and acknowledged that a National Government “was our (Leitrim's FF councillors') preferred option.”
He said that from the time that Covid-19 struck Ireland “a joint effort was always what was in mind to get the country up and out of this and this must harness any and all parties.”
He said: “I don't detect any huge resistance to joining with other parties (in Government), it's about the policies and we are concerned about the policies which may be brought in and about the sustainability of any Government formed. Will they be able to hang in for the five year term? These are important considerations.”
Similar concerns were expressed by Cllr Paddy Farrell who said he remained opposed to the current coalition configuration.
“What we said in our letter (to Micheál Martin), my position on that hasn't changed,” he said.
“The last time we were in power with the Greens, well we are still not over it yet. We are still feeling the impact of things like the changes for one-off housing.”
Cllr Justin Warnock said he had already received a number of calls from party members in the local area expressing their unhappiness with the coalition.
“They see us entering Government with Fine Gael in particular as Fianna Fáil selling out on our principles as a party,” said Cllr Warnock.
“And I agree with that. I have always believed that we (Fianna Fáil) are first and foremost a Republican party. That is our tradition and that was always the difference between us and Fine Gael. Going into government with Fine Gael, we are losing that difference. We are in danger of becoming one and the same and I am not happy with that. I am not happy with the direction this is taking us in and I stand fully behind what we (Leitrim's Fianna Fáil councillors) said in our letter last month. My position on this hasn't changed.”