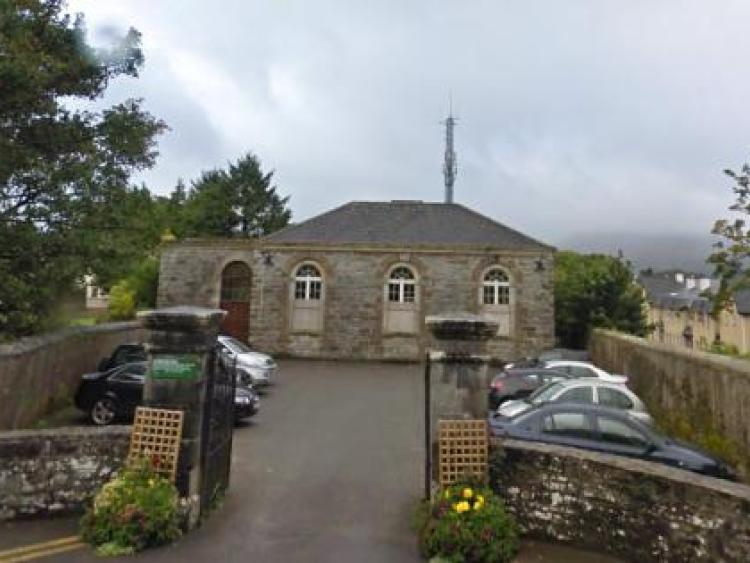 North Leitrim councillors have unanimously backed motions calling on the local authority to look at the possibility of taking over the historic former Manorhamilton courthouse.
At the October meeting, councillors Felim Gurn and Frank Dolan both put forward motions on the former courthouse.

In his motion, Cllr Gurn asked that repair works be carried out on the courthouse entrance and wall, pointing out that structure is looking dilapidated.
He said the listed courthouse building has had a “significant part to play in the history” of Manorhamilton adding it would be a “terrible” to see it lost to the community.

He called on the Council to contact the Courts Service with a view to handing the structure over for use for local community groups.
Cllr Frank Dolan also raised the future of the listed building.
He said he had highlighted the issue in February and again sought a meeting with the Courts Service to secure the building.
"The reality is that this building has been under the care of the Courts Service so its (condition) is not a Council issue," he admitted.
"But it's a shame to see it going into dereliction. The council should put pressure on the Courts Service to hand it over (to the Council). It could add an awful lot to the town of Manorhamilton."
He said that the push to return former Manorhamilton Courthouse into the ownership of the Council has been given a significant boost by the success of the long campaign seeking the return of the former Ballinamore Courthouse to the Council.
He also pointed out that, nearly 20 years, before the closure of the former Manorhamilton site, the Courts Service had discussed proposals to invest substantially in a major upgrade of the building.
However this upgrade never eventuated and the structure was closed and the entire interior of the courthouse has been gutted.
Cllr Gurn warned that unless steps were taken the structure, which is now boarded up, will fall into further disrepair and may be lost to the community forever.
"If we don't do something with it now it will end up like the castle," he warned.
Cllr Mary Bohan backed both motions stressing the importance of securing this historic site.
She pointed to the success of taking over the former courthouse in Drumkeerin which is now being used by youth services.
Cllr Justin Warnock and Cathaoirleach, Cllr Sean McDermott, also added their support to the motions.
However Director of Services, Mary Quinn, noted that "every building has liabilities and further costs" which would have to be borne by the council if the structure was returned to their care.
"Before we can consider seeking the return of the former courthouse in Manorhamilton we have to look at the state of it and any issues have to be taken up with the current landowner (the Courts Service)."
She suggested that, in the short term, councillors agree to contacting the courts service about the current state of the building.
District engineer, Marie Mulligan, following up on Cllr Frank Dolan's motion in February, said that the Council is still awaiting a reponse to a letter sent to the Courts Service about Manorhamilton Courthouse, earlier this year.
“ To date, no response has been received. A follow up letter will be issued to the Courts Service and the issue with the entrance can be included in this letter,” she noted.