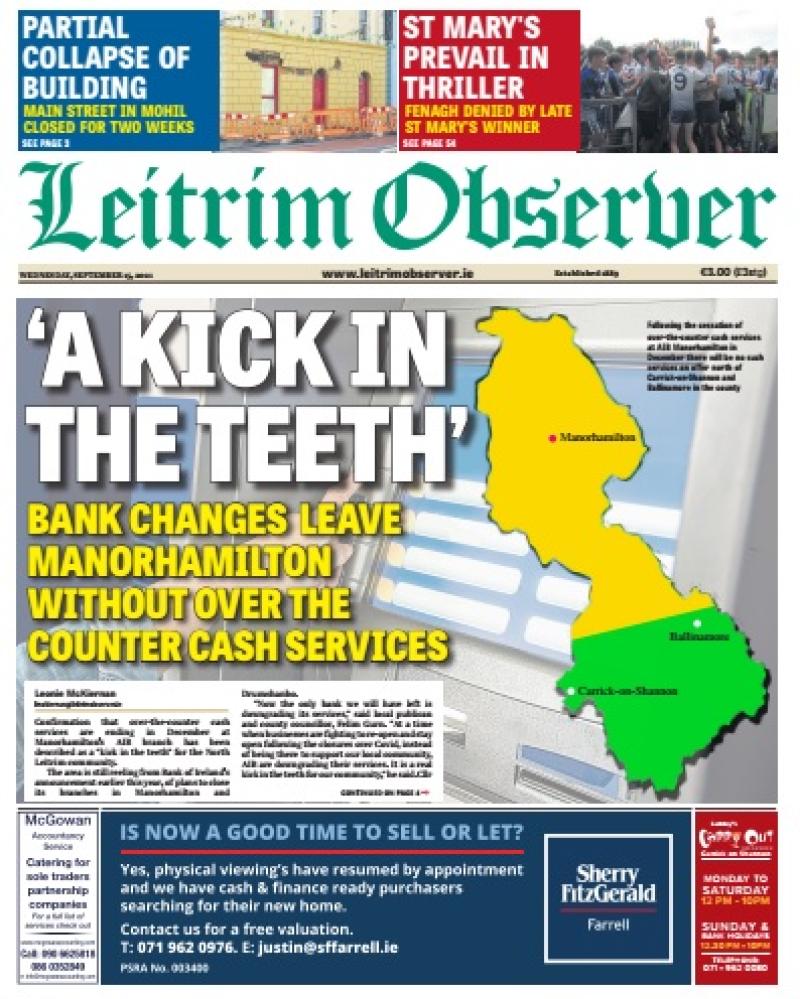 Confirmation that over-the-counter cash services are ending in December at Manorhamilton's AIB branch has been described as a “kick in the teeth” for the North Leitrim community.

The area is still reeling from Bank of Ireland's announcement earlier this year, of plans to close its branches in Manorhamilton and Drumshanbo.
“Now the only bank we will have left is downgrading its services,” said local publican and county councillor, Felim Gurn. “At a time when businesses are fighting to re-open and stay open following the closures over Covid, instead of being there to support our local community, AIB are downgrading their services. It is a real kick in the teeth for our community,” he said.Cllr Cllr Gurn said he was shocked to receive an email from AIB notifying him of their intention to cease over-the counter cash services from December.

“This will really mess up businesses in our community, we will no longer be able to get change or make cash deposits (over-the-counter), now we are being told to drive to Carrick-on-Shannon or Sligo. It's complete and utter nonsense.
“This community has supported our banking institutions and now when we need them, our banking institutions are turning their backs on us.”

In a statement issued to the Leitrim Observer an AIB spokesperson confirmed the changes set to come into play in early December adding that over the counter transactions such as cash, cheques, coin, foreign exchange and bank drafts “will still be available at AIB Sligo, 26.2km away, Carrick-on-Shannon, 48km away or at any other full-service AIB branch".

“In recent years, we’ve seen an unrelenting reduction in some of the ways our customers use our branches. More customers are banking online, using our mobile app and making contactless payments.
“Customers are now interacting with our digital app more than 1.54 million times a day, compared with 35,000 daily branch visits. At the same time, we’ve found that there has been a 39% decline in branch cash transactions since 2019," said the AIB spokesperson.

Customers can also use digital alternatives and, in the case of businesses, AIB Merchant Services.
"At AIB we are committed to our branch network, have a strong presence in the communities we serve and with 170 branches continue to have the largest branch network in the country," pointed out the bank spokesperson.
The changes come as some of AIB’s branches move towards sales and advisory services.
Customers will still be able to use the bank's cash and cheque lodgement machines to deposit cash and cheques and withdraw money.

The spokesperson also said transactions can also be carried out at Manorhamilton Post Office.
Cllr Gurn said the excuse justifying a reduction in services due to reduced footfall, when Ireland has been facing a pandemic over the last 18 months, “is utter nonsense”.
The Manorhamilton councillor said in “just a few years we've gone from having three banks to soon having just one and that one not offering over-the-counter services.
“Travelling to Sligo or Carrick-on-Shannon is not feasible,” he added noting that many suppliers for businesses still want cash payments, “what will we do about that?” he asked.

“This will affect the whole circular economy. We need cash and we need access to cash services such as the provision of change.”
He also asked what will happen to the elderly or those who aren't “tech savvy”.
“We're seeing a total withdrawal of face-to-face services and financial institutions in Manorhamilton, at a time when businesses are trying to reopen, to stay open. We would have expected that banks would have stood by us for the first one or two years, post-Covid, but they haven't. First the Bank of Ireland is closing branches and now this.”
Cllr Gurn said he had serious concerns about the rush to online services pointing out “if a credit card machine goes down it could be down for days.”
“As a business owner when a transaction is carried out via a credit card machine it can take two to three days to clear into your account,” he added.

“This isn't going to do any favours for businesses or our town. Come this December there will only be one bank branch serving the biggest part of the county, there will only be one branch serving everything between Kinlough and Carrick-on-Shannon, and now that branch won't be doing over-the-counter cash transactions.
“None of this, not the closure of Bank of Ireland or this, makes any sense at all.”