Pushback against loss of banking services in Manorhamilton 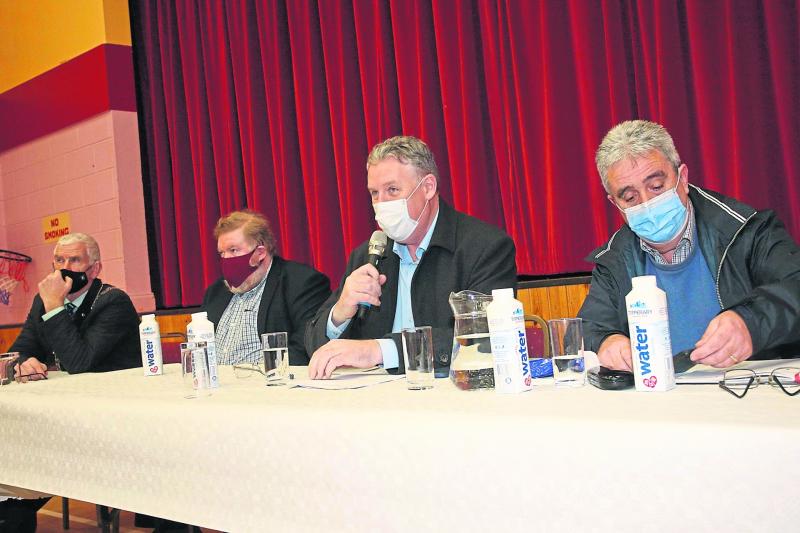 Pushback against "cashless society" in Manorhamilton

A new steering committee is being set up in Manorhamilton to attempt to deal with the major banking service probelm in the area.

A public meeting was held in the Bee Park Community Centre last night, which discussed the recent closure of the town's Bank of Ireland and the impending ending of counter services in the Allied Irish Bank early next month.

The well attended meeting was organised by the IFA's Kevin Comiskey and Councillor Felim Gurn and  was presided over by former RTE Midland's correspondent, Ciaran Mullooly.

Mr. Mullooly remarked it was good to “see a crowd coming out tonight, especially with current Covid problems and it shows how strong you feel about the bank closure.”

He welcomed all the public representatives who were in attendance. Ciaran detailed how the Lanesboro Rathcline community came together to address a local issue of the National Irish Bank closing down in Lanesboro many years ago, and how through community action they managed to get NIB to provide a 24 hour ATM in Lanesboro after the bank closed.

Chairperson of Leitrim County Council Paddy O'Rourke told the meeting that he was “happy to attend and support the community” in their fight to deal with the current banking problems. He also believed that the role of credit unions will have to be expanded to cater for all local communities.

Councillor Felim Gurn said Manorhamilton had “three banks in the town for over 100 years” and that the recent widespread bank branch closure by the Bank of Ireland was “an attack on rural Ireland.” He also revealed that the Manorhamilton BOI ATM used to provide €500,000 each weekend in Manorhamilton, which was an essential service for all in the town as well as visitors.

The Manorhamilton Councillor believes the banks are making a “real push in Ireland to make it a cashless society” and it “is a big issue for the farming community in particular” he noted. Kevin Comiskey added that “90% of the Marts and Meat Factories are paying by cheque.”

Leitrim IFA Chairperson Des McHugh endorsed what Kevin Comiskey said and remarked that he “was delighted to see the people of Manorhamilton had come out tonight to fight to maintain an essential banking service in the town.”

National IFA Farm Business Committee Chairperson, Rose Mary McDonagh who travelled to the meeting from Headford in Galway stated that now “farmers are having problems cashing cheques.” She also added “the bank is the heart of the town and it keeps business in the local town.”

independent Marian Harkin TD, who travelled from Dublin for the meeting stated local banking was needed more than ever in Manorhamilton because of the 1,100 people “who everyday work in the town and since Covid came more people have moved back home to work.

“The business case was never stronger for banking services in Manorhamilton.” She also favoured strengthening the credit union to enable it to provide more financial services for the community. The TD also stated the Central Bank is stifling what services credit unions can provide. Her bill currently before the Dáil aims to deal with this issue and to allow credit unions to provide additional services.

Councillors Sean McDermott and Enda McGloin also spoke at the meeting and gave their full backing to the fight to maintain financial services in Manorhamilton. At the end of the meeting it was agreed that the Steering Committee will seek to open discussions with the Allied Irish Bank on continuing the provision of local financial services and the Committee will also have discussions with Manorhamilton & District Credit Union on this matter, as well.