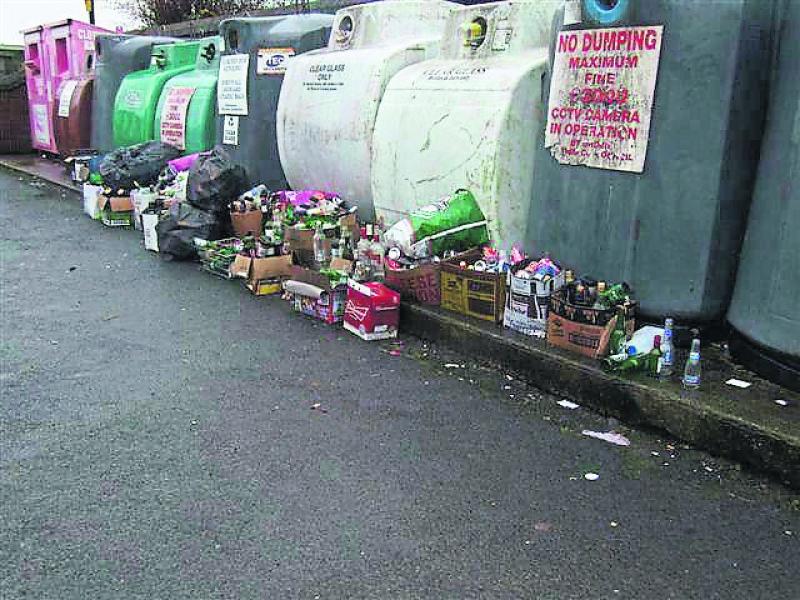 Bottles, boxes and household waste dumped at one of Leitrim's bring bank centres

The wait for new legislation dealing with  the installation of new CCTV cameras has delayed the possible use of mobile CCTV at the county's bring banks until at least 2023.

At Monday's Manorhamilton MD meeting, Cllr Mary Bohan asked for an update on the provision of CCTV cameras at bring banks around the county.

Cllr Bohan said that she had raised this issue on a number of occasions adding cameras “would stop a lot of carry on we are seeing at these bring centres”.

She noted that, while the majority of the public used these facilities responsibly, there was a small number who left boxes and bags at the centre when the bins were full and others who dumped incorrect materials in the bins.

Responding, the Council noted it “may be early 2023” before legislation comes into effect dealing with the installation of CCTV cameras which would then allow this type of surveillance to be used at bring bank centres.

Director of Services, Mary Quinn explained that at the moment, the installation of new CCTV cameras in public spaces requires the completion of a privacy assessment as a result of data protection rules.

It is hoped that the new legislation will address many of the concerns currently raised about the installation of new CCTV.

Cllr Bohan said that it was now a case of “waiting” for the new legislation to come into force.

Cllr Justin Warnock backed her call for more CCTV at bring banks noting the important work that volunteers do around the county to keep Leitrim clean.

Cllr Bohan agreed noting that CCTV would provide the local authority “with another arm to help” address the issue of dumping.