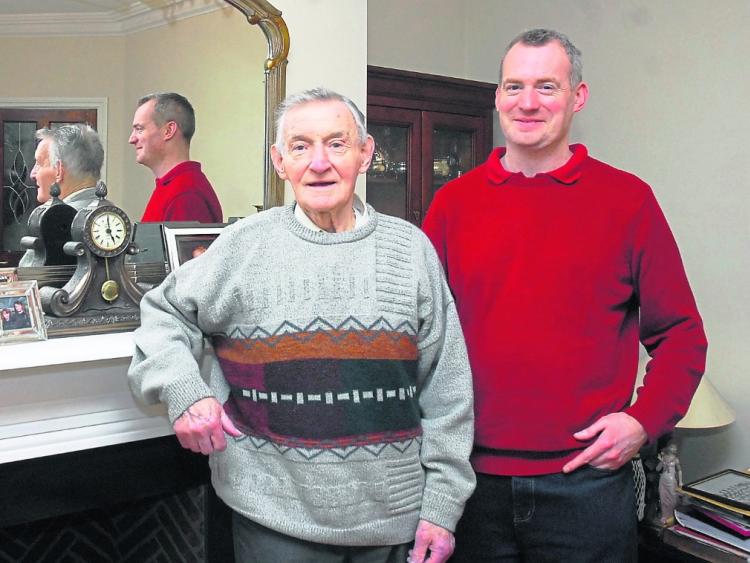 The legendary Pakie McGarty pictured with his son Eamonn who received a special award from the Leitrim Supporters Club Dublin branch to mark the 60th anniversary of Connacht's Railway Cup win in 1958.

The man regarded as Leitrim’s greatest ever gaelic footballer Pakie McGarty might have been unable to attend the Dublin launch of the Leitrim’s Supporter’s Club recently but his son Eamon was on hand to represent him and the great man’s passion for football and for Leitrim, was perfectly evident in the words of his son.

In recent years those not lucky enough to have witnessed Pakie in full flight with the Leitrim jersey on his back, will have got a flavour for the esteem in which the man and the player are held.

His regular visits to the launch of the Supporter’s Club see him treated like royalty while the standing ovation he received when he was inducted into the Leitrim Sports Partnership Hall of Fame will live long in the memory of all present.

Growing up in Dublin, where there are no shortage of sports stars, Eamon could have been forgiven if the magnitude of his father’s achievements didn’t fully dawn on him as a youngster but he revealed trips to Leitrim as a child helped him fully realise the esteem in which was father is held.

“I would have realised quite young. We would have come down for a lot of the games, particularly in Carrick-on-Shannon and you would realise as you start to get a little bit older and meet so many people and the enthusiasm dad had.”
From the early visits to Leitrim it became apparent quite quickly to Eamon and his siblings that there was something a little bit different about their father but Eamon was quick to point out that the affection in which Pakie is held in Leitrim is fully reciprocated.

“You quickly learned and then you saw the teams that he was picked on. In 1984 when he was picked on the best team that never won an All-Ireland, I was nine at the time. It kind of dawns on you that there was something significant. And afterwards, when you see him going to different functions with Leitrim, you start to realise.

“It is as you get older that you realise and it is apparent the affection and the mutuality of it. Dad had a phenomenal affection for Leitrim. We used to be travelling down the country and he would say that was the one regret that he had, that they didn’t deliver a Connacht title because by God they deserved it, the supporters. That was his only regret that they didn’t get to achieve it.” 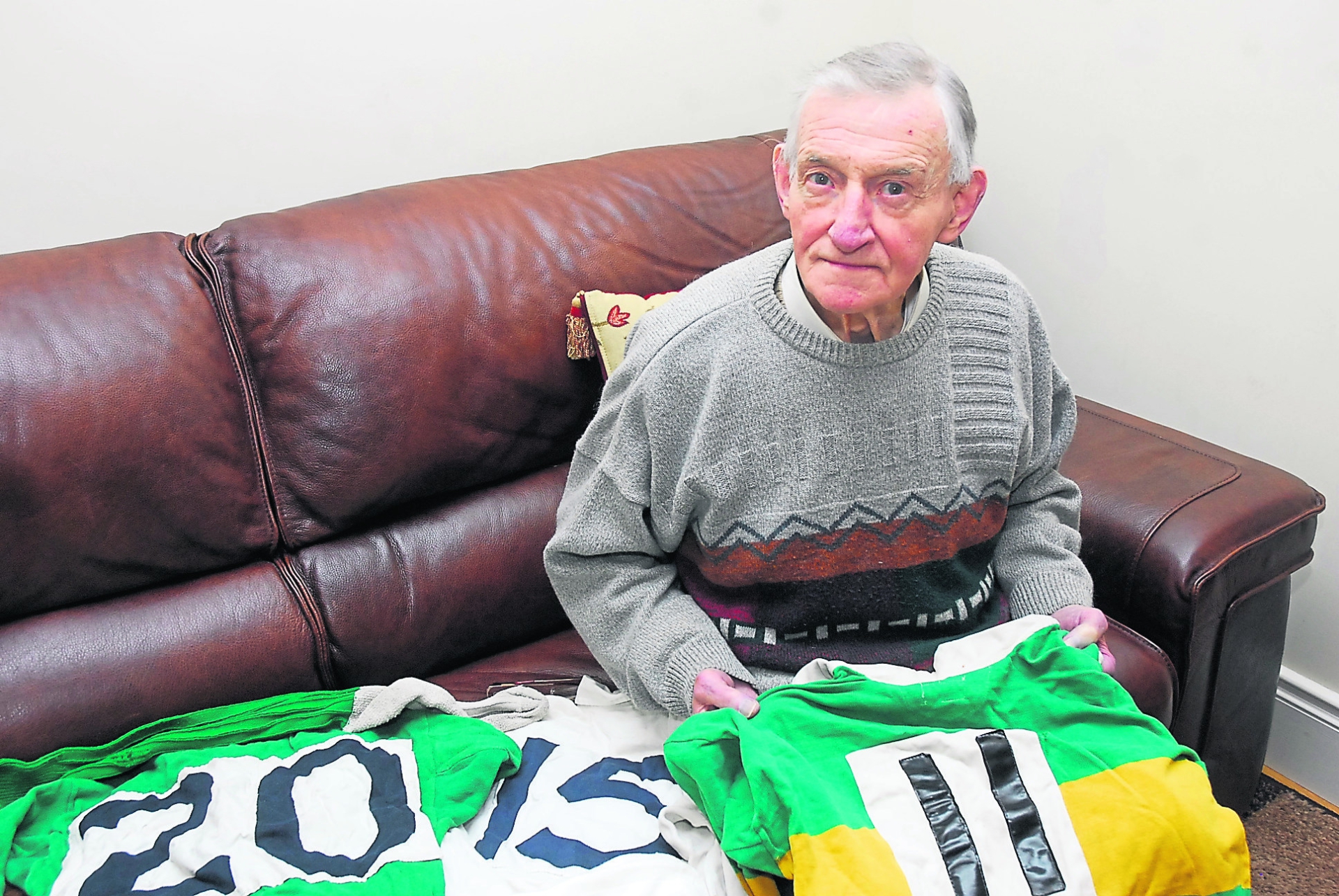 Pakie McGarty is pictured with a selection of his Leitrim, Ireland and Connacht jerseys from his remarkable career. Photo by Willie Donnellan.

The fact that Leitrim failed to win any silverware during Pakie’s career which spanned four decades (1949-’71) fails to tell the story of how good Leitrim and Pakie were, particularly in the late 1950s. Although Leitrim didn’t get the rewards they deserved, Eamon recalled his father always followed the fortunes of the team that emerged triumphant in Connacht, even if it had cost him a Connacht medal!

“He played in six finals but he never begrudged Galway, he was always very magnanimous. I used to see him at Croke Park at games and he would always say ‘you get behind whoever comes out of the west’. We were growing up and we went to Leitrim games and some of the Dublin ones but you wouldn’t necessarily get behind Meath! That was the great belief and he would always support whoever came out of the province.”

The strength of the Leitrim team during that era led to provincial recognition for a number of the players who were invited to the recent Supporter’s Club launch in Croke Park to commemorate the 60th anniversary of Connacht’s 1958 Railway Cup victory.

While aware of the talent Pakie possessed as a footballer, Eamon was equally familiar with the rest of the names from those Connacht teams, particularly the Leitrim players.

“I would know the 1958 team because dad would have spoken about them down the years, so the names would have been synonymous growing up and that love for his county and his sport shone through.

“Sometimes dad is a little bit embarrassed because he would say to me, ‘We had a great team. We were good enough in the ‘50s and ‘60s to win it.’ It was a very long time ago but at the same time what mattered to them was the jersey and the pride that was there.”

The demise of the inter-provincial tournament is something Eamon says Pakie regrets as it was a special competition, particularly for the players who hailed from counties who may have been starved of success.

“Dad laments that the Railway Cup doesn’t have the same stature because for players from smaller counties it was huge. I also think it’s good because it breeds a bit of camaraderie as well. You are competing and there is a strong rivalry but at the same time you can actually play together like the international series.” 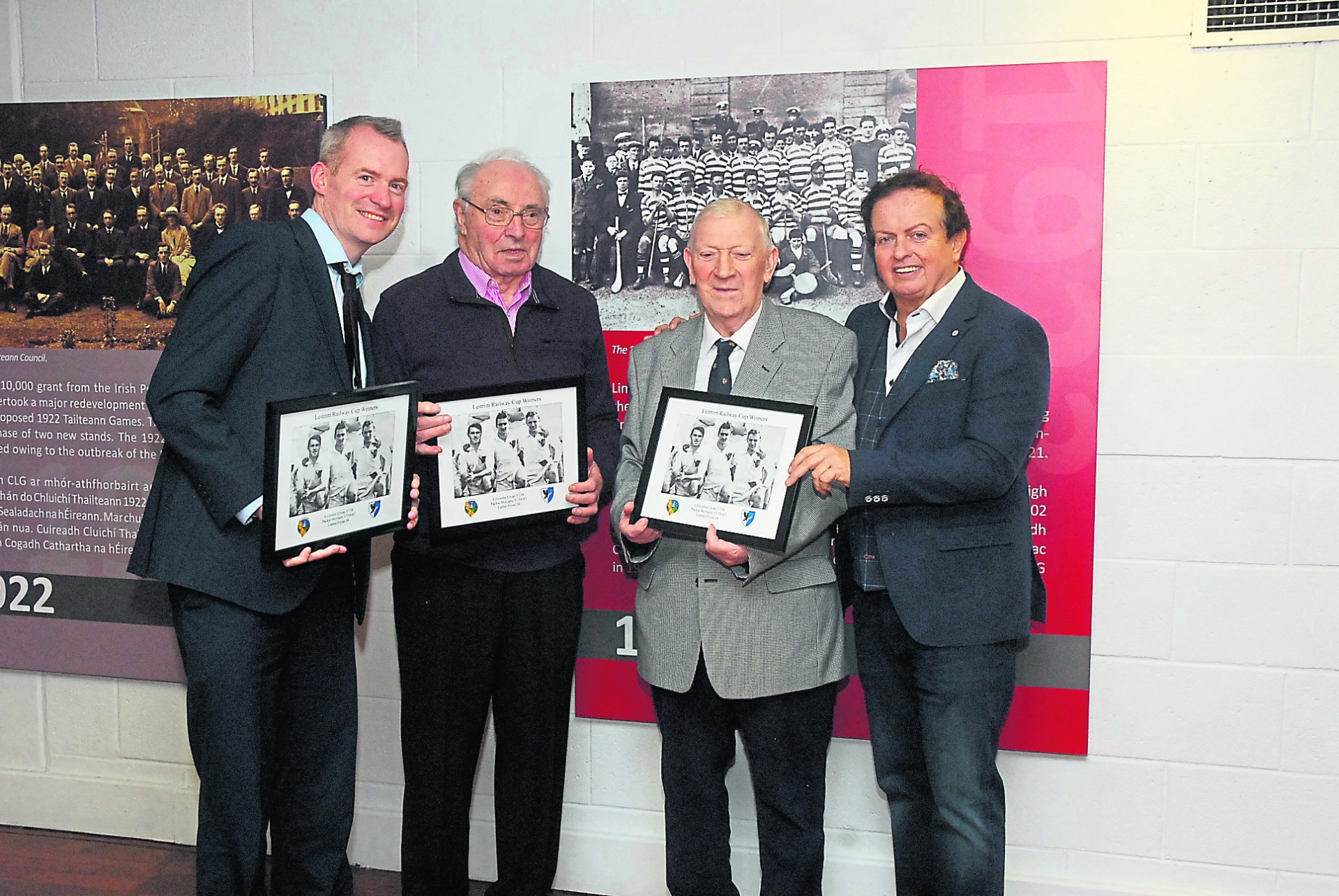 RTE star Marty Morrissey pictured with Eamon McGarty, representing his father Pakie, Columba Cryan and Cathal Flynn after the three were honoured for playing with the victorious Connacht Railway Cup team in 1958.

While Eamon may not have seen his father play at the height of the powers he has been lucky enough to watch a lot of football in Pakie’s company and reports that his father is also an astute judge of talent.

“I saw him spot players a few years back that were subs on some of the top teams who went on to become footballers of the year. I saw him commenting to me that they could have been taken off but he would see it. They would be making the runs, they would be in the right positions and he would see the instinct.

“He would tell you straight off 'that is going to be a great player'. He would look for certain ingredients but he was a good analyst, he would be quite but he would watch everything but he loved it completely.”

As well as being able to cast a critical eye on the current crop of players, Pakie was also quick to pay tribute to those he played alongside from his young days in Mohill right through his inter-county career.

“He would often show us the pictures and I always noticed Dad has his arm around his team-mates shoulders, particularly the Leitrim players in Connacht jerseys. They got on very well with Connacht and he was very proud of the lads he played with and that meant everything to him.

“He still talks about his schoolboy team in Mohill, they never lost! Four or five of them played with the county but dad, he would forget a birthday next week but he’ll still remember a match from the 1950s. Everyone who played, who came on, who scored. My mum would chastise him over that!”

When asked if his talent as a player helped him to become an astute judge Eamon came to the conclusion that his father was blessed with a combination of talent and a huge determination.

“I think you have to have natural instincts but you also have to have huge desire and commitment. I think there is a natural skill and certain players, one he always looked up to and talked a lot about was Leo McAlinden, who was a great when he was growing up. He found him an inspiration and he modelled things on him.

While talking to Eamon, the affection with which his father is held in Leitrim remains crystal clear as countless people came up to him, asking that their regards be passed on to the great man, but as his father no doubt would have wished, Eamon was quick to heap the praise on those Pakie played alongside as he named a number of players Pakie loved playing alongside with the great Cathal Flynn singled out for particular praise.

“He often said to me that the best player he ever saw was Dr Padraig Carney, the Mayo centre-forward, he was like a father-figure, maybe 10 years older and dad found him inspirational. He would look at certain players and he can see an attribute. People need to love their football and I think that was a big thing for dad, he loved playing the game.

“The Railway Cup meant an awful lot to dad. You had days in Croke Park when you had a full house and you were playing on Kerry captains. I remember Padraig Harrington’s father from Cork, Sean Murphy, Frankie Stockwell and dad would often comment to me that Cathal Flynn was as good as any player. 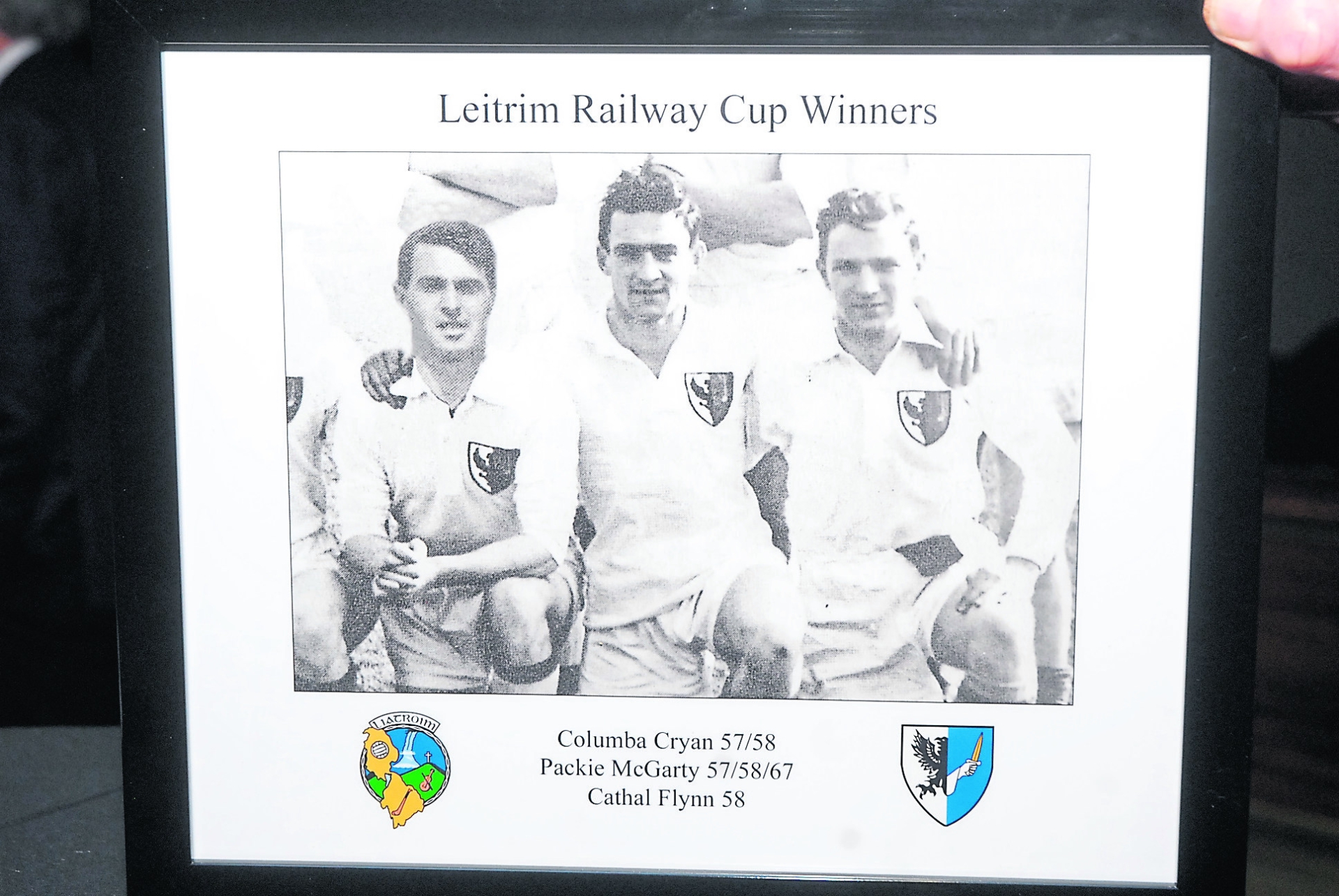 A picture of the presentation that was made to Pakie McGarty, Cathal Flynn and Columba Cryan in recognition of Connacht's 1958 Railway cup victory at the recent Leitrim GAA Supporters Club launch in Croke Park. Photo by Willie Donnellan

“When you are talking about great corner-forwards he said Cathal was up there, both feet, he could score off either side, he could dummy, he loved scoring goals and he was very accurate. He was deadly and he was just as good on the ground. He was just very, very good he says.”