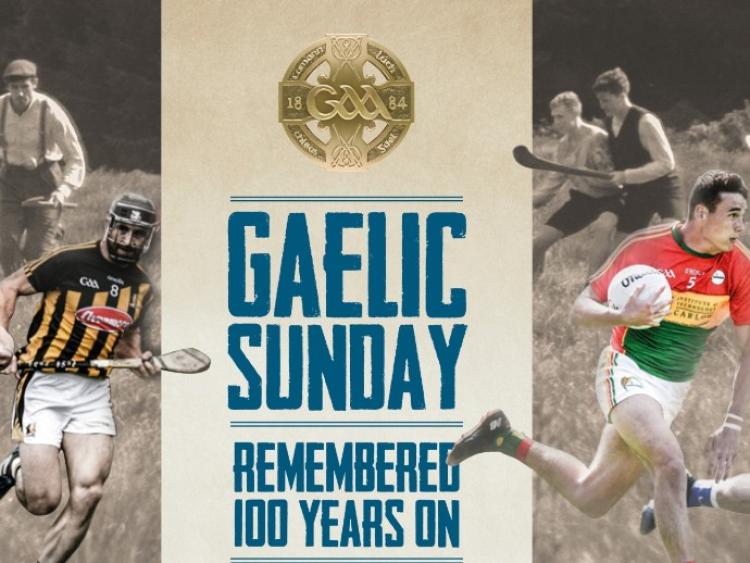 This weekend marks the centenary of Gaelic Sunday with commemorative events planned by GAA clubs across Ireland and abroad. The anniversary will also be marked by a special colour parade at Croke Park.

Gaelic Sunday was a seminal moment in the history of the GAA when clubs were galvanised in a defiant and peaceful protest against a clampdown and disruption of Gaelic games activity by British authorities.

Several flashpoints had occurred in the summer of 1918 and came to a head after an Ulster football semi-final between Cavan and Armagh was forcibly disrupted in Cootehill on July 7.

The response was an order from GAA Ard Stiúírthóir of the time, Luke O’Toole, for every club and parish to hold a GAA activity at 3pm on Sunday, August 4, 1918. As a result, some 50,000 people played in more than 1,000 matches involving hurling, football and camogie and were watched by an estimated crowd of more than 100,000 people.

The success of Gaelic Sunday helped ensure the threat to the playing of Gaelic games was lifted.

From tomorrow, GAA Clubs in the US, the Middle East and Britain are planning events under the banner of the Gaelic Sunday anniversary.

In Ireland clubs have been encouraged where possible to hold events across Saturday and Sunday that also commemorate Gaelic Sunday and the importance of their GAA club.

There are re-enactment matches between clubs who played this weekend in 1918 such as Edenderry and Rhode in Offaly.

There are history talks, parades, family days and blitzes among clubs in all four provinces. Clubs hosting events are being asked to record and post their events to twitter and instagram with the hashtag #GaelicSunday.

At Croke Park on Sunday there will be a special Gaelic Sunday commemoration held in between the two matches on the clár.

After the end of the EirGrid U20 football final between Mayo and Kildare and ahead of the Dublin v Roscommon GAA Football All-Ireland senior quarter final there will be a colour parade on the pitch.

All 32 counties will be represented in a parade of juvenile players in their own club colours who will march on Croke Park with the Artane Band and meet Uachtarán CLG John Horan.

Uachtarán CLG John Horan said, “Gaelic Sunday was a crucial moment in the early history of the GAA and cemented the importance of clubs in their community.

“The legacy created is the vibrant Association that we have today where clubs continue to be the focal point of their local communities and people continue to be inspired to celebrate and play our native games.

“One hundred years on we honour the courage of the men and women who stood up for the right to play and support the GAA.”

Relatives including grandchildren of Luke O’Toole attended a talk on Gaelic Sunday held by Iar Uachtarán CLG and prominent GAA historian Aogán Ó Fearghail at the GAA Museum on Wednesday.

The museum will cover the events of Gaelic Sunday this week and the famous Luke O’Toole letter is also on public display from the archives.