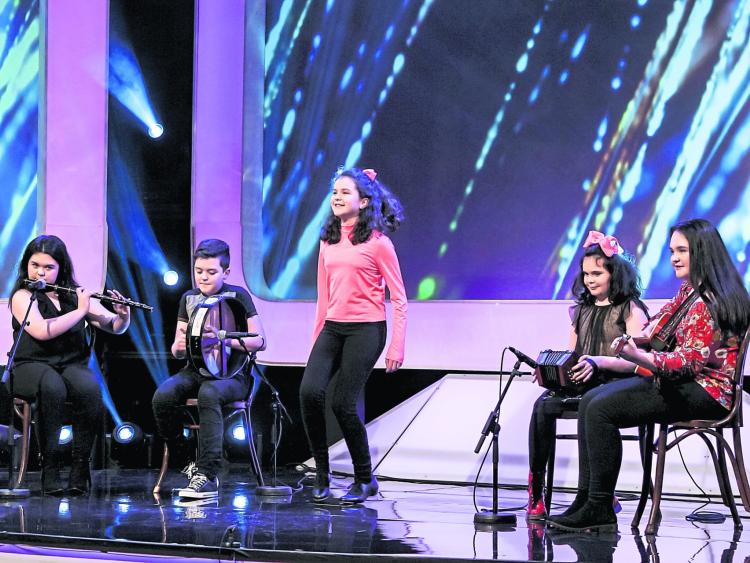 The Kellegher siblings from Cloone, Co Leitrim performing on stage in Réalta Agus Gaolta, the search for Ireland's most talented family, which will air on TG4 on Sunday, March 24

TG4’s hit Sunday night entertainment series Réalta agus Gaolta is back on screens this month and on the lookout for Ireland’s most talented family.

Siblings, Saoirse (16), Tara (15), Tiarnán (12) and twins Erin and Aoife (12) will take to the stage to fight for a place for the semi finals playing trad music and sean nós.

Over 13 weeks the most entertaining families in the country will take to the stage to showcase their talent.

They will be singing, dancing and banging out the tunes, as they go head-to-head against each other.

Hosted by Síle Seoige, the series will see over 70 acts battle it out to impress the judges: Jim Lockhart, a member of the Irish rock band Horslips. With almost 50 years experience in the music business, Jim knows what it takes to entertain a crowd!

Irial Ó Ceallaigh, champion sean nós singer. Irial was born into traditional singing with his family in An Rinn and in 2018 won the men’s sean nós singing competition at the Oireachtas.

Sinéad Ní Uallacháin, radio producer and broadcaster with the inside track on what people want when it comes to entertainment.

From rock and roll to sean nós to power ballads and more - the series has it all but there can be one winner - tune it to see who will be crowned Ireland’s most talented family!