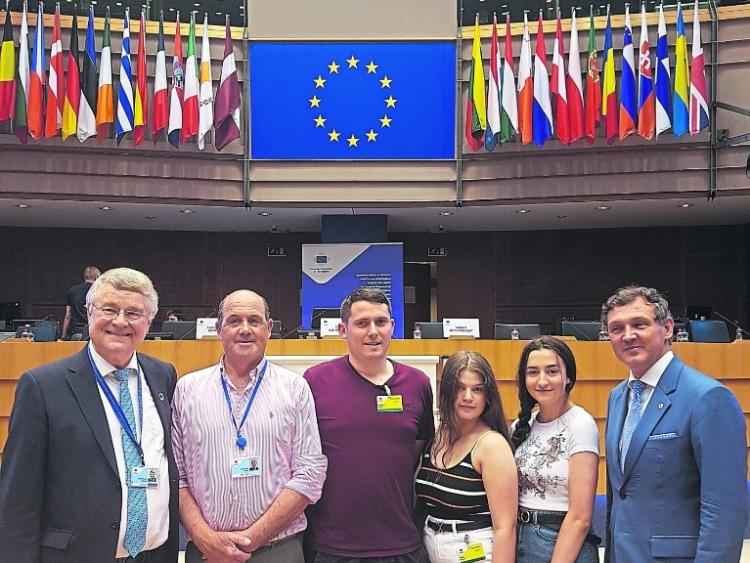 On June 26 and 27, 21 students and teachers, winners of the 2019 edition of the European Alliance (EA)/European Committee of the Regions (CoR) Secondary Schools Competition took part in a two-day study trip to Brussels where they attended the 135th Plenary session of the CoR and met the President Karl-Heinz Lambertz and members of the EA Group.

The 14th edition of the competition took place in Estonia, Ireland, Italy, Lithuania, Poland, Romania and Slovakia, and involved pupils aged 14 to 18.

The first stage of the competition consisted in a multiple-choice test, which assessed the pupils' knowledge of the European Union (EU) and its institutions, while the second part required them to write an essay discussing ways to increase young people's participation in the European elections.

The Irish winners were Hannah Fallon and Erica Ridge from Mohill Community College in Leitrim and they we accompanied on the visit by teacher Seamus Kennedy.

Leitrim County Councillor Cllr Enda Stenson suggested the school entered the competition as he saw this opportunity through his work in the European Committee of the Regions he felt that students and young people engage more with the European Union and its Institutions in Brussels.

Cllr Stenson said that he was delighted the young winners had the opportunity to meet other young students from across Europe and participate in a meeting in the main chamber of the European Parliament in Brussels.

As part of their trip, the students had an opportunity to visit the European Parliament, to learn about the history of the EU at the European House of History and to discover the city of Brussels through a tour of its historical centre.

After meeting the pupils at the CoR, President of the EA Group Karl Vanlouwe and member of the Flemish Parliament said: “Our Secondary Schools Competition has for many years been bringing together talented young students from all across Europe.

“In addition to celebrating the diversity of our continent, it stands as an example of how the European institutions can strengthen the bonds with their local roots and with the generations that will be shaping the future of the EU.

“After visiting the beautiful Lough Rynn Castle for an EU meeting on regenerating rural areas in February of this year, it is a pleasure to welcome the young Leitrim students to Brussels.”