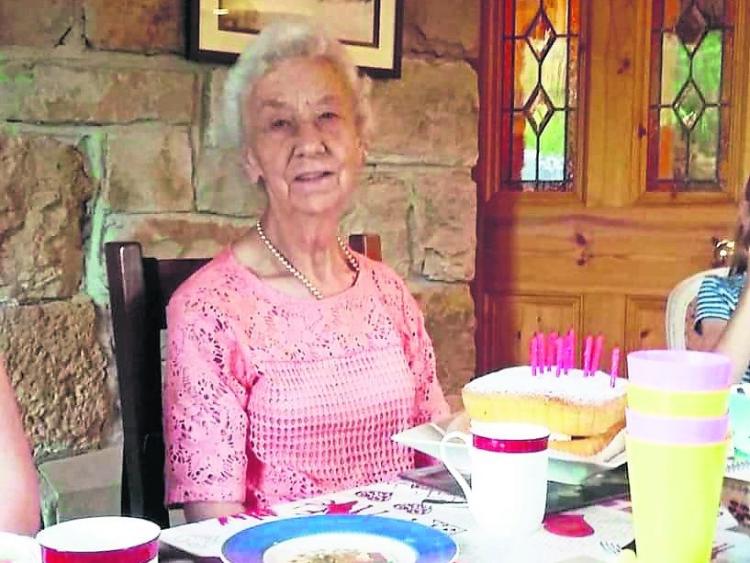 It is with profound sadness that we have learned of the passing of Cissie Duffy, Breanross South, Gortletteragh, Co Leitrim.

Cissie was a President of the Club and one the most ardent supporters of Gortletteragh football that you could ever hope to meet.

Cissie was a real community woman at heart, and this was borne out through her involvement in so many areas of life in our parish down the years. She was an active member of the Gortletteragh ICA, and was ever present at all their events and activities in years gone by.

A lifelong member of the church choir in Gortletteragh, Cissie was a constant presence in the lives of parishioners every Sunday.

Indeed, along with her choir mates, she sang at the launch of the definitive book on Gortletteragh Club and Parish history, Scéal Gort Leitreach in 1991.

In her role as secretary of the Farnaught/ Gortletteragh Cemeteries Committee, Cissie helped organise a major refurbishment and rehabilitation of the historic Farnaught Cemetery. The cemetery is centuries old and had fallen into disrepair. The works involved a complete upgrade of the cemetery grounds, the reconstruction of the lychgate entrance, the construction of a perimeter path with disabled access, as well as environmental improvements to the cemetery surrounds.

Projects and developments such as these don't just happen - it takes sustained efforts by committed individuals, and Cissie has been at the forefront of all of these activities.

Over the past months, Cissie and her colleagues on the Cemeteries Committee have been working in partnership with Leitrim County Council to plan a major scheme of improvements to Gortletteragh Cemetery improvements to the pathways, front wall, entrance gates and environmental improvements.

The Committee will work diligently to ensure the successful implementation of this project in honour of the late Cissie Duffy who has been such an inspiration to them over many years.

Cissie was an active participant in the social aspects of the club for many years. She represented Gortletteragh in Scór in both the Ballad Group and Set Dancing competitions.

Many Gortletteragh teams, men and ladies, have made the walk past the stand to the dressing rooms in Cornageeha and beyond and been greeted with an approving congratulations from Cissie upon winning or a sympathetic smile if the result didn’t go our way.

Cissie was as usual attending all our games up until very recently. Cissie was present in Páirc Seán a few weeks ago to watch her granddaughters Eimear, Gráinne and Rachel capture a Ladies Division 3 title with Keeldra Gaels, which no doubt filled her with immense pride.

In her role as Club President Cissie attended several club functions such as the launch of our Facilities Development Plan.

In August 2017, she alongside fellow club President Joe Sorohan unveiled a commemorative plaque celebrating the 50 year anniversary of the opening of Páirc Gort Leitreach at our Jubilee Event.

We have no doubt Cissie will be looking down on the fortunes of Gortletteragh GAA and Keeldra Gaels LGFA with great interest in the company of Peter and TP Reynolds, Club Presidents who have also recently passed to their eternal reward, and the late Pat Clarke, all of whom are sadly missed and fondly remembered.

Cissie was defined by her grace, her warm demeanour and positive outlook, she had a kind word for everyone she met and her support for all things Gortletteragh was unfailing.

Cissie will be sadly missed by all in the Gortletteragh GAA fraternity and indeed the entire community of Gortletteragh and beyond.