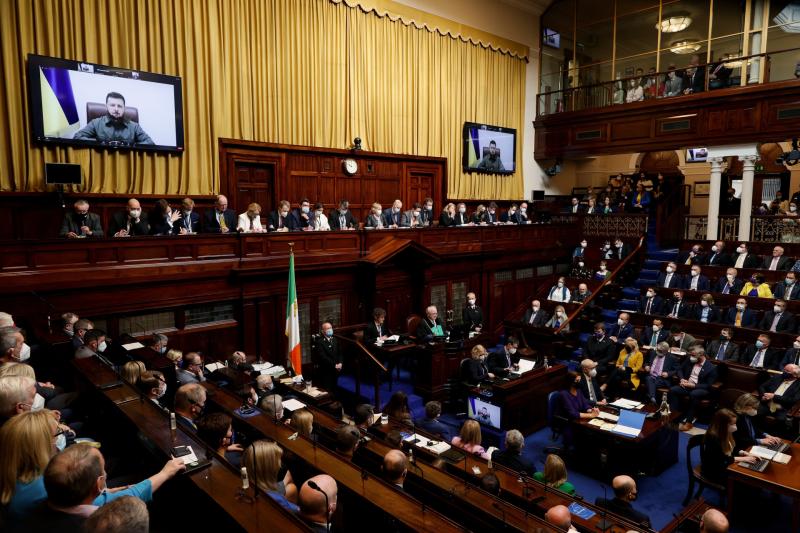 The Ukrainian president has praised the Irish people in a historic address to the Oireachtas.

President Volodymyr Zelensky spoke to a joint sitting of the Oireachtas earlier today (Wednesday April 6) through the aid of a translator, and expressed gratitude to every citizen of Ireland.

He said, "From the very first days, you are supporting Ukraine and this is a fact. You did not doubt starting helping us, you began doing this right away and although you are a neutral country, you have not remained neutral to the disaster and to the mishaps that Russia has brought to Ukraine."

"Thank you for the humanitarian and financial support extended to our country and thank you for your caring about Ukrainian people who found shelter on your land."

The president told the Oireachtas that Russia needs to be held responsible for what has been done to Ukraine.

He said, "They are destroying things that are sustaining livelihoods to people. They also have blocked all of our sea ports, together with the vessels that had already agricultural cargoes for exports.

Watch today's opening remarks by the Ceann Comhairle and the address by Volodymyr Zelenskyy, President of Ukraine, at a Joint Sitting of Dáil & Seanad Éireann in Leinster House - 6 April 2022 #seeforyourself #Ukraine https://t.co/cR4oYL14dd

"Why are they doing this? Because for them hunger is a weapon against us, ordinary people as an instrument of domination."

According to President Zelensky, Russia doesn't deserve to be "in the circle of the civil countries", and called for stricter sanctions on the country.

He continued: "Please, I would like you to show more leadership in our anti-war coalition, I would like to ask you to convince EU partners to introduce more rigid sanctions against Russia that would make sure the Russian war machine will stop.

"We have to put an end to trading with Russia, we have to cut ties of Russian banks to global systems, cut the sources of their income from their oil that they use for their weapon and for the killing.

"There are mechanisms how to do this, the only thing we're lacking is the principle approach of some leaders, political leaders, business leaders who still think war and war crimes is not something as horrific as financial losses. I'm sure your leadership can make a difference and change this.

"I'm sure the whole of Europe will be able to stop this war and bring peace and stability to Eastern Europe. We cannot delay any longer, the longer this aggression of Russia will continue, the worse will be the consequences, not only for our continent but neighbouring regions."

The president received a standing ovation from the Oireachas.

The Taoiseach, Micheál Martin, addressed President Zelensky and said, "Russia will have to live with the shame of what they have done in Ukraine for generations. Those responsible will be held to account. We are with Ukraine and I am certain that, in the end, Ukraine will prevail.

"We are a militarily neutral country. However, we are not politically neutral in the face of war crimes. Quite the opposite.
Our position is informed by the principles that drive our foreign policy – support for international human rights, for humanitarian law and for a rules-based international order.

"We are not neutral when Russia disregards all of these principles. We are with Ukraine."

"To those who have arrived from Ukraine, I hope you find in Ireland safe harbour and friendship for as long as you need it."

Tánaiste Leo Varadkar also spoke and said, "A little over a hundred years ago, perhaps Ukraine’s greatest national poet  captured their dreams of freedom and courage. Her words still resonate today. The people of Ukraine are ‘sowing flowers of flowing colours, even amidst the frost, and watering them with bitter tears. Know that ‘the abandoned fire of your songs will burn forever in the world, it will burn at night, it will burn at the daytime.’ It will burn forever.

"We also have a message too for the aggressor, for President Putin, his government, his diplomats, his collaborators, and his apologists here and abroad.  Over the past 42 days you have violated the human rights of another sovereign people, your neighbours, your friends, your so-called Slavic brothers.  You have raped and defiled the very principles of common humanity which bind us together in peace and harmony.

"You have betrayed your own people and your own country’s rich history and culture, your own resistance to oppression over many centuries."

He continued: "To those responsible for this conflict, we have a simple message from this House. Your actions will never be forgotten, they will never be forgiven. Thanks to the power of modern media, we have seen what you've done. You've made yourselves outcasts in the international community, you've strengthened Ukrainian national identity, you've united Europe and the West and you've made our values shine brighter ever still.

"We are a small country but we have a voice, and today we say to the world that Ireland stands with Ukraine. Our hopes, our thoughts, our prayers are with the men, women and children of Ukraine today and tomorrow and forever. We know you will prevail. Slava Ukraini."