"These are the evenings you live for" - Leitrim's Diarmuid McKiernan 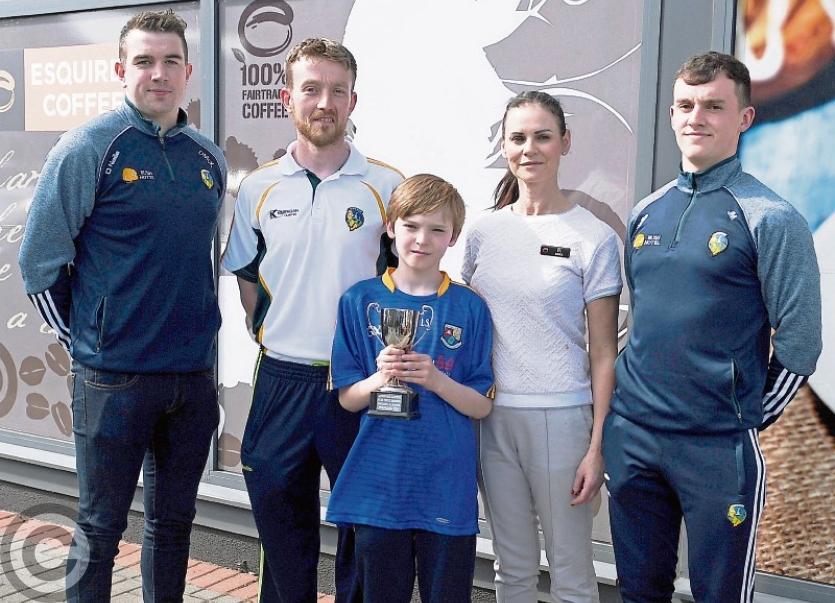 Pictured at the launch of the Esquires Longford Leitrim U12 Cross-Border League were, from left, Diarmuid McKiernan, Enda Lyons, Jack and Dee Monahan and James Mitchell. Photo by Declan Gilmore

Leitrim and Roscommon in Pairc Sean Mac Diarmada - it is the sort of game that any young footballer living alongside the Shannon dreams about when they start playing football. At least it is what Diarmuid McKiernan dreamed about!

The Allen Gaels clubman was elevated to the County Senior team and made his Championship debut against New York. But it is clear that the prospect of facing Roscommon next Saturday evening is filling the Leitrim keeper with excitement.

“These are the evenings you live for really, it is a great opportunity,” said Diarmuid when chatting with the Observer at the launch of the Esquires Longford Leitrim U12 Cross-Border League last Thursday, “Where I’m from is right on the border with Roscommon, others lads might be from the Longford border or with Donegal but this is something I’m really looking for to and I can’t wait to get out there.

“I’d be chatting with lads I went to school with and I do get bits of niggles here and there. They carry a bit support, it will be an intriguing battle. A Saturday evening game is going to be something different.

“Hopefully it will be a hot evening, there will be sun setting, different factors just to take into but it is something to relish, something exciting about it and hopefully the time will draw the fans out.”

His Championship debut against New York was a highly pressurised occasion but one Diarmuid relished - “Even to be part of the Leitrim squad to go over there was great, the experience over there was second to none. We went over there and up to the Sunday, it was to do the business.

“The support offered by the management was fantastic and it gives up the platform to go on. I’m just delighted that I could back up the belief they had in me. It was a great experience to get all the lads together, it is not often you get the lads away together for five days. There was great spirit in the group and great bonding.”

And Diarmuid paid tribute to the impact of the Leitrim fans who made their voices heard in Gaelic Park - “Although it was 5,000 miles away from home, it felt like it was at home there were so many supporters over there.

“We put the shoulder to the wheel, we gave the fans an experience I suppose but I always had faith in the forwards, I always knew there is something special and some great forwards there. I had great belief in the lads, I never doubted them.

“There were times when it looked shaky but I always knew the lads had it in them to do if they got the opportunity which they did and fair play to Noel for sticking it over the bar.”

Diarmuid downplays his own role in the victory, two crucial clearances under huge pressure vital for the Green & Gold against New York - “I’m there to keep the ball out of the net, I’m there to do my job and at the end of the day, it was a team effort that got us over the line and that is all that matters.

Roscommon are the reigning Connacht Champions but Diarmuid stresses that Leitrim cannot worry about the doomsayers - “The lads have worked really hard over the last couple of months, we will do our best against Roscommon, put in a performance and we’ll take it from there. We’re just worried about ourselves and how we’re going to approach the game.

“I’m really looking forward to it. They have some great boys but at the same time, we have some great backs to handle them boys and I have every faith in the lads out the field and I’ll do my bit if I’m called upon.”

“There was a lot of pressure but the lads took it in their stride. Against New York, grinding out a result when it was needed shows the mental strength and ability these young lads have.

“I think the mental strength we showed to fight back, to grind out a result there and just the bond that grew between lads there, that we were willing to die for one and other, was something else. It really brought us closer as a group.”