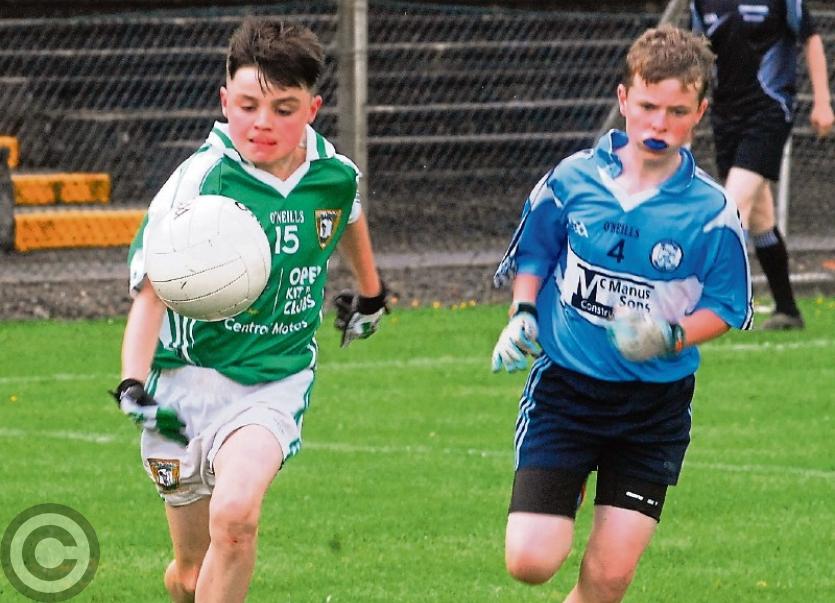 Mohill's greater firepower and strength told the tale as they overcame a battling Allen Gaels last Friday in the Westlink Coaches U15 League 15-a-side Final.

The game got off to a blistering start when Mohill goaled twice inside 60 seconds, Conor Macklin scoring after a great run from Sean Bohan and then Bohan finding the net himself. Bohan almost had a third goal but his shot was saved by the keeper.

A shook Allen Gaels responded with good points from Aerek Oberwan and Ciaran McMorrow but Conor Quinn pointed from 30 yards after a nice run. The Gaels hit back with points from McMorrow and Mark Reynolds as they defied the odds against them but again Mohill came back with a point from a Quinn free.

But Mohill were rattled when Allen Gaels also found the net twice inside 60 seconds, the first after a great move out of defence ended with McMorrow's long range shot dipping just under the crossbar for a goal.

Rattled, Mohill quickly conceded another when Radek Oberwan got to a pass in behind the defence ahead of the keeper to fist the ball to the net and suddenly Allen Gaels were two points up, three when McMorrow put over a free.

Sean Bohan replied with a point as Allen Gaels led 2-5 to 2-3 at the break. Conor Quinn and Radek Oberwan swapped points early in the second half before McMorrow saw a good shot tipped over the bar on four minutes.

Two minutes later, the game turned again with two goals in a minute - Conor Macklin lashed home from close range after a free broke in the goalmouth and Sean Bohan quickly added a fourth.

Mohill made sure they wouldn't be caught again as Conor Quinn (free) and Aonghus McCrann put over frees and then Bohan completed his hat-trick just seconds after a great save from Gaels keeper Rory O'Donnell. From the resulting 50, the ball broke and Bohan pounced.

Matthew Murphy pointed before Radek Oberwan converted a penalty, awarded for a foul on himself, after 16 minutes. Points from Macklin, Quinn, McCrann and Keoghan Curran (2) followed with only a Conor Flood point in response as Mohill cruised to a comfortable victory.

Main Man: Mohill were strong everywhere with Conor Quinn outstanding in the middle of the park. Finn Cassells, Thomas McNabola and Donal Duignan stood out in defence while Sean Bohan and Conor Macklin were brilliant in attack. For Allen Gaels, Ciaran McMorrow looks a real prospect, Jamie McGrail is a real talent, Radek & Aerek Oberwan were impressive while Conor Flood and Jake Tobin worked hard.

Talking Point: Mohill have cut a swath through this Division and look nigh on unbeatable. But long term, an understrength Allen Gaels may reap just as many benefits from a physically smaller team when they start to develop.

Turning Point: Mohill looked shaky as Allen Gaels led by three early in the second half but two goals in a minute from Conor Macklin and Sean Bohan transformed the game in their favour.

Highlight: Two teams giving it their everything with some nice talent on show, Mohill's strength in depth the difference.

Lowlight: After the excitement of the first half and early second half, the only disappointment was that the game ended as something of a damp squib.