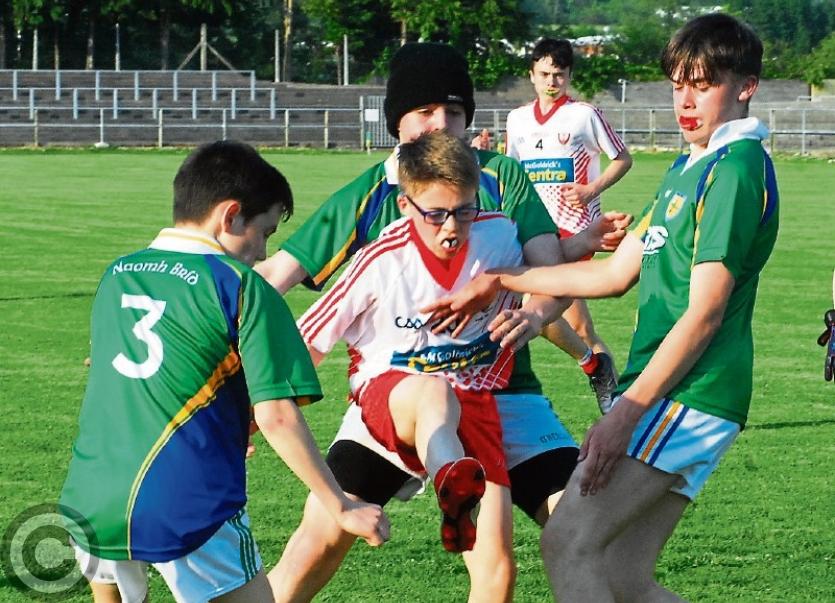 Dromahair's Liam Torsney is surrounded by the St. Brigid's defence to prevent his shot. Photo by Willie Donnellan

St. Brigid's scored an unanswered 1-9 before St. Patrick's Dromahair got their first score of the evening as their pace, power and precision left the north Leitrim men floundering.

St. Brigid's were quick off the mark with a Darragh Gunne point after just 42 seconds and Conor Edwards followed up quickly with a second point as the Aughawillan, Aughnasheelin & Drumreilly were dominant in every sector.

Gunne was denied a goal by a last ditch block but Cillian Cullen tagged on a point after a good run on eight minutes. Gunne would then fire over two points in the space of a minute, the second of which could have been a goal.

Stephen Burke made a good save to deny Cian Sammon a goal but points from Conor Edwards and Gunne (2) had St. Brigid's nine clear before a long ball clattered off the crossbar and fell nicely for Oisin Conefrey who buried the ball in the net on 22 minutes.

Strangely, that seemed to liberate Dromahair and they hit back with a point from sub Eoin Moyles before a high ball came off the St. Brigid's keeper and Liam Torsney was on hand to bury the ball in the net.

James Clinton pointed after a great catch from Jamie Cawley but Oisin Conefrey finished the half with a fine point to leave St. Brigid's 1-10 to 1-2 in front at the break.

Moyles opened the second half scoring for Dromahair in the third minute after good work from Eoin Ryan and Conor Morrison but Gunne would hit back with two good points to stretch the lead.

Dromahair pulled back a goal on 17 minutes when James Clinton finished well but St. Brigid's wiped out that goal with points from Fergal Flynn, Cullen, Tommy Reilly and Emmet McGirl.

Dromahair did finish with a late flourish as Eoin Ryan hit a monster 50 yard effort and James Clinton got his second goal from close range in added on time.

Main Man: Darragh Gunne was the scorer in chief and took some great scores but the midfield duo of Emmet McGirl and Conor Edwards really stood out for St. Brigid's while Cian Sammon, Cillian Cullen and Darragh McTeigue were impressive. For Dromahair, James Clinton, Jamie Cawley, Gary Rooney and Eoin Moyles did well.

Talking Point: The battle between fixtures and schedules continues - Dromahair wanted a postponement as they were missing several players on a school trip but it was denied. St. Brigid's probably would still have won but Dromahair had no chance of victory minus key players.

Turning Point: No turning point as such as St. Brigid's were always in control but Oisin Conefrey's goal actually seemed to free up Dromahair and they started to play much better after it.

Ref Watch: Referee Jimmy Stenson didn't have much to do but did show a lot of common sense to allow both teams  have water breaks during each half on a sweltering hot day in Pairc Sean Mac Diarmada.

Highlight: Darragh Gunne scored well for St. Brigid's, the goals both teams scored were good finishes while Eoghan Moyles scored a wonderful point on the turn from distance.

Lowlight: Despite the scoreline, for a long time, there was little if any tension in this game as St. Brigid's dominated.