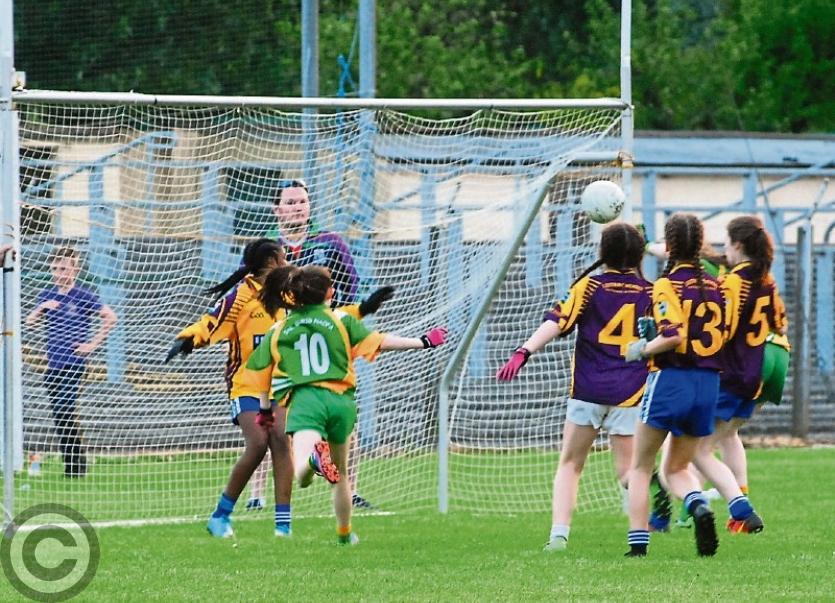 With shots being saved on the line and other flying inches past posts, St. Joseph's Leitrim Village claimed a hard fought win over a battling Scoil Chlann Naofa of Ballinamore.

The high drama of the closing minutes belied a game that took a long time to get going but when it did, it was end to end stuff with St. Joseph's ability to take their chances proving the difference on the evening.

Ellie Butler opened the scoring with a first minute free with Emma McKiernan levelling five minutes last for Ballinamore. It took six minutes for the next score, a Butler free before Emma Clarke burst through to fire over the Ballinamore bar.

The big breakthrough came on 15 minutes when Clarke's great catch set up Butler for a goal, Butler adding a point before Lucy Murphy scored an excellent point for Ballinamore who also saw a shot hit the crossbar before McKiernan pointed.

St. Joseph's led 1-4 to 0-3 but McKiernan and Butler swapped points before the Village team seemed to take control when Hannah Walsh produced a spectacular finish for a goal. Ballinamore keeper Aoibhinn Keegan made a good save to deny Butler a goal.

A Laura Maguire free was followed by a poacher's goal from Ava Gallogly after she blocked a clearance.

St. Joseph's replied with two good points from a Butler free and a fine point from Millie Keane from distance to put five between the teams with nine minutes to go.

Ballinamore wouldn't lie down and a Lizzie O'Connell free was followed by one from Emma McKiernan to suddenly leave a goal in it with less than three minutes to go and Ballinamore driving forward.

Lucy Murphy blazed a goal chance over the bar while a Gallogly shot was inches away from finding the net, the follow up from Murphy saved on the line. As the game ticked into added time, Ballinamore also saw a free saved on the line as St. Joseph's held on for an extremely hard fought victory.

Main Woman: Ellie Butler and Emma Clarke were the engine room for St. Joseph's victory, both superb on the ball and both tireless in the ground they covered. Ashley O'Brien was a rock in defence and Hannah Walsh & Millie Keane had big moments. For Ballinamore, Emma McKiernan & Laura Maguire drove them on from the middle of the park, Maguire doing great work in defence as well while Lucy Murphy was outstanding upfront and Ava Gallogly a threat when she got good service.

Talking Point: Numbers can be small but to see the Boys Division 1 Final at 15-a-side and the Girls at 11-a-side is somewhat peculiar. It can't be said that there isn't Ladies football in Leitrim and maybe it is something that could be looked at, increasing it to even 13-a-side next year.

Turning Point: Hannah Walsh's goal gave the Leitrim Village school some breathing room but the score that breathed life into the contest was Ava Gallogly's goal, coming from nothing as she blocked a clearance and then found the net. It got Ballinamore up and running.

Ref Watch: Cyril McKeon kept a good rein on the game, played the advantage rule well although there was one heavy foul that could have been penalised more.

Highlight: Hannah Walsh's goal really stood out in a tight game, a superb finish while the running with the ball of Lucy Murphy was also a treat for fans to watch.

Lowlight: Again hard to find fault with much although some of the shooting from both teams let down some great approach play on the night.