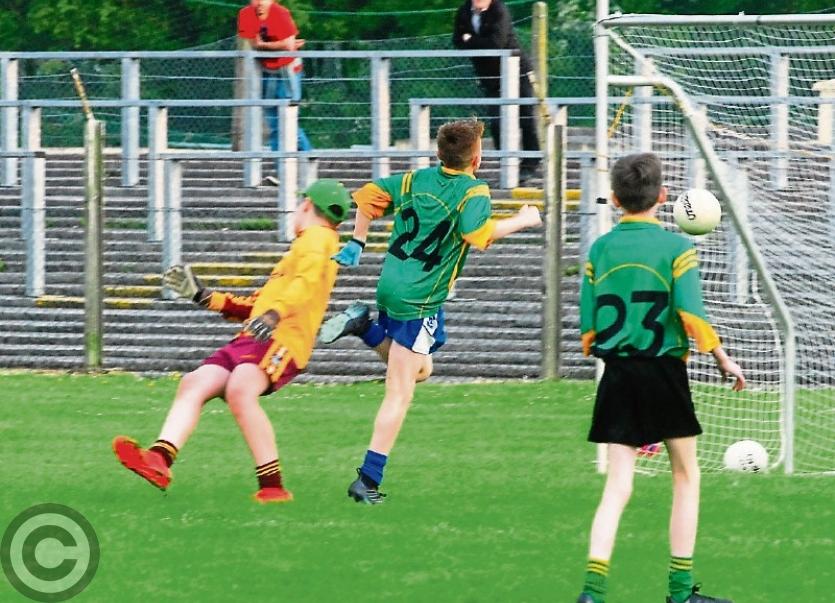 A superb high scoring contest that often seemed to be just between Ben Guckian and Darren Cox ended in favour of Gaelscoil Liatroma.

An injury to Eoghan Ridge knocked Annaduff badly in the first half and although they fought incredibly well to cut a lead back to just three points, they had no answer to the superb Ben Guckian.

The equally impressive Darren Cox scored nine points for Annaduff who fought to the bitter end with heart and spirit.

Peter Moran opened the scoring for Annaduff but Gaelscoil took over with 1-1 from Ben Guckian inside a minute and points from Dylan Mac Cumhaill, Brian Keaney and Guckian extended the lead while Keaney added a goal.

All those happened after Eoghan Ridge was forced from the game with an injury and Gaelscoil would add a goal from Zach Brennan and points from Guckian (2).

Annaduff showed their spirit with two late goals from Eamonn Healy and Nathan Cox to leave the halftime score at 3-6 to 2-1. Young Ridge returned to action for the second half and it energised his team with Darren Cox seemingly unstoppable.

The young Annaduff man would hit four points in the first four minutes, two either side of a Ben Guckian response. Guckian's scoring was keeping Annaduff at bay as he swapped points three times with Senan Mooney and Cox in the next four minutes.

Ridge and Darren Cox narrowed the gap to a goal with nine minutes left but Gaelscoil hit back in style, Guckian pointing twice and Conor Duignan goaling.

Annaduff hit back with three Senan Mooney points, one in response from Keaney, but Guckian killed the game off with a deft finish near the end. Annaduff kept fighting and Darren Cox hit two late points to bring his tally to an incredible nine for the evening.

Main Man: Ben Guckian and Darren Cox staged what seemed to be a duel in the second half and it was a joy to watch. Different types of players, they both had a huge impact and it was a real treat to watch them produce some moments of magic. Brian Keaney, Diarmuid O'Connell, Jack Deegan, Gerard Murtagh all stood out for the Gaelscoil while Eoghan Ridge, Peter Moran, Oran Beirne and Senan Mooney impressed mightily for Annaduff.

Talking Point: Some super talents on show here. They are very young and can do without pressure being heaped on them but there is talent out there in Leitrim.

Turning Point: Eoghan Ridge's injury was an enormous blow to Annaduff. Gaelscoil may well have still won the title but in Ridge's absence, Gaelscoil opened up a 3-6 to 0-1 lead that meant Annaduff were always chasing the game. When brought back on, Annaduff won the second half 0-14 to 2-7!

Ref Watch: Ray McBrien didn't have an awful lot to do and it must be a joy to referee a game where both teams approach it with the right attitude.

Highlight: Ben Guckian scored a lovely final goal for the Gaelscoil while Darren Cox, pictured right, showed incredible handling ability to hold off his man and sweep over a point on the run.

Lowlight: To be honest - none!