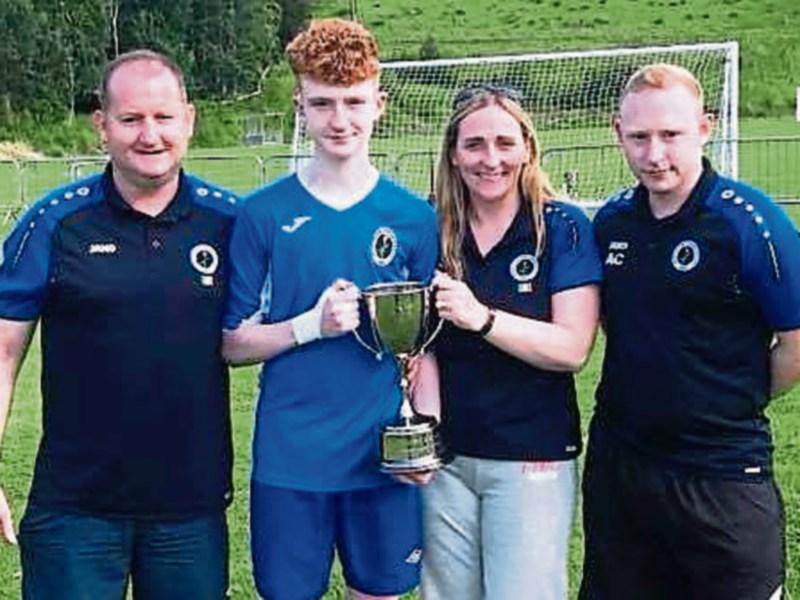 Manor Rangers ended a 28 year wait for Connacht glory on Bank Holiday Monday when their U15 team defeated Tuam Celtic after extra-time to claim victory in the Skechers Connacht Final.

Having trailed twice during the course of the game it was an incredible achievement for the North Leitrim side as they displayed plenty of composure and no little skill to get the better of the Galway side as they deservedly emerged victorious.

The game began with Manor giving a glimpse of their threat as an attacking force. Eanna Clancy released a brilliantly disguised through-ball for Patrick Montgomery but the forward was adjudged to be marginally offside.

With little to separate the sides during the opening exchanges the game was almost 15 minutes old before the first real chance arrived. Alan Kavanagh’s early cross was well met by the head of Patrick Montgomery whose run into the box hadn’t been tracked. Unfortunately for Manor, Montgomery’s powerful header was just off target.

Having been happy to sit back during the opening quarter of an hour, Tuam gave their first glimpse of their attacking ability when Alan Banks unleashed a thunderbolt of a strike from over 35 yards. Manor Rangers goalkeeper Ben Gavin was forced to back peddle rapidly but he and the rest of the Manor players were relieved to see the ball fly just over the bar.

The breakthrough arrived in the 19th minute when a cross from Matthew Glynn was met by the head of Brian Cooper. The header wasn't particularly powerful but it was placed perfectly into the corner of the goal, just out of the reach of Ben Gavin.

That proved to be the only goal of the opening half but with the words of encouragement from Roger and Adam Connolly ringing in their ears, Manor started the second half brightly.

Eanna Clancy saw a shot from distance saved while Muireann Devaney was incredibly unlucky to see her wonderfully struck half-volley from the edge of the box fly just wide.

Four minutes after his introduction and with just 16 minutes remaining Manor's Gabriel Gilbride pounced for a deserved equaliser. Diarmuid Giblin's brilliant run down the right wing was matched by his dangerous cross which just eluded everyone in blue but Muireann Devaney was able to recycle possession and Gilbride was on hand to force the ball home.

With 10 minutes remaining and with Manor pushing for a winner, disaster struck for the Leitrim side. Tuam goalkeeper Karl Ward launched a huge clearance upfield which was chased by the fresh legs of Tuam sub Jamie Sweeney. Manor goalkeeper Ben Gavin came off his line in an attempt to claim the ball but it took a wicked bounce deceiving the goalkeeper and the chasing centre-backs and the ball ended up in the Manor net.

To their credit Manor responded brilliantly once more and deservedly levelled matters with four minutes remaining when Barry McNulty's header was judged to have crossed the line.

With nothing to separate the sides extra-time was required to find a winner and once more it was Manor Rangers who continued to dominate matters.

The decisive moment arrived with a minute of the first of extra-time remaining when Muireann Devaney capitalised on some great work from Diarmuid Giblin and she found the Tuam net to spark scenes of great celebration as Manor saw out the remainder of the game to claim a thoroughly deserved win.

Player of the match: There were a number of candidates from a Manor point of view with Matthew Connolly, Eanna Clancy, Diarmuid Giblin and Cathal Óg O'Connell all impressing but it is hard to look beyond Muireann Devaney who was introduced as a first half substitute and ultimately scored the winning goal after a very impressive overall contribution.

Talking Point: Was it over the line? There were plenty of discussions about whether or not Barry McNulty's header had crossed the line before being headed clear. While the videos and images are inconclusive one person who was in no doubt was the assistant referee who immediately signalled for a goal.

Turning Point: With 10 minutes remaining Manor were rocked with the concession of a bizarre goal scored by Tuam's goalkeeper Karl Ward. Trailing and with time running out Manor heads could have dropped but they responded brilliantly to dominate the remainder of the game and ultimately secure extra-time victory.

Ref Watch: The Tuam Celtic bench were less than happy with the decision to award Manor Ranger's second goal. The ball appeared initially to have been headed off the line by Thomas Hynes but the linesman was adamant the defender was behind the goal line when his head connected with the ball.

Highlight: Hard to look beyond the winning goal. Diarmuid Giblin did brilliantly to create the opportunity and then showed great awareness as he squared the ball to Muireann Devaney who made no mistake with an emphatic finish.

Lowlight: After an absorbing game it is hard to think of any lowlights. Even the rain that threatened to dampen matters with a heavy downpour before kick off failed to take away from the enjoyment of an excellent game.