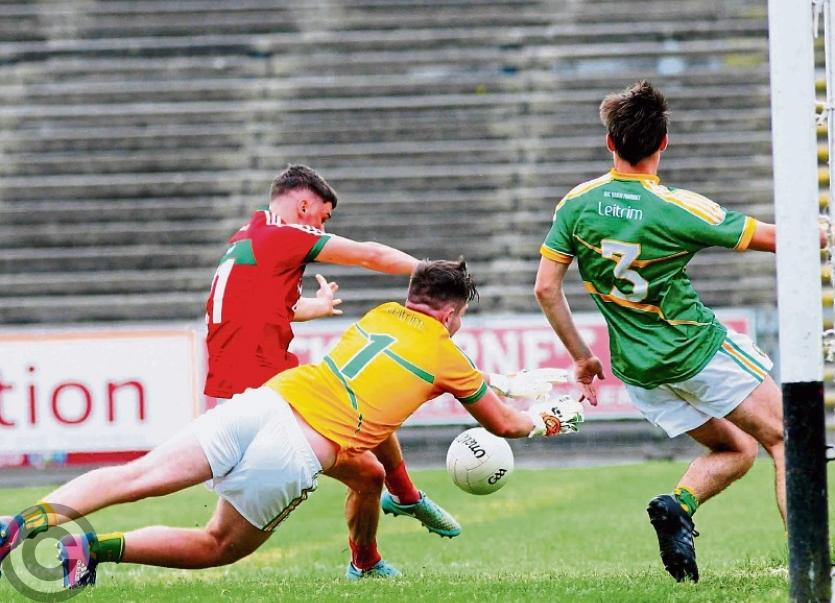 Leitrim keeper Darren Maxwell gets down to block a shot from Mayo's Ryan O'Donoghue with Evan Harkin on the line. Photo by James Molloy

There was no joy for Leitrim in McHale Park Castlebar on Saturday afternoon when they took on a much superior Mayo outfit in the Connacht U20 semi-final, which was played in front of a very small crowd.

The GAA’s new U20 championship that replaced the long running U21 grade militates more against Leitrim than the bigger counties like Mayo, since any player who is underage for it but opts to play for his county’s senior team can not play for the U20 side.

Leitrim were short four players in Castlebar due to the new rules while preparations suffered a further setback since a number of potential starting team members did not opt into the panel when invited.

An early Mayo attack was curtailed on Saturday thanks to some good work on the part of the Leitrim defensive unit. Following this, Leitrim ran at Mayo for a short while and was impressive in doing so.

But Mayo soon got to grips with the visitor’s best efforts and afterwards Leitrim was forced to play second fiddle from about the 13th minute of the action right up to the final whistle.

The Mayo forwards, led by man of the match, Ross Egan, ran riot shooting points at ease. As a result of Mayo’s overall dominance, the Leitrim forward division saw much less of the ball.

Despite this Jordan Reynolds, who accounted for all of Leitrim’s scores, did his best to stem the Mayo tide whenever he could. Leitrim ‘keeper Darren Maxwell could not be in anyway blamed for his side’s heavy defeat as he pulled of many fine saves including the stopping a 44th minute hit Ryan O’Donoghue spot kick.

Leitrim put Mayo under some early pressure and won a 35 metre free which was taken by Jordan Reynolds whose high kick dropped short into the Green and Red’s goalmouth and was cleared.

Mayo created a 3rd minute goal chance when Nathan Moran was put through unmarked but Leitrim ‘keeper Darren Maxwell made a timely save to smother Moran’s goal bound effort.

Left corner Tommy Conroy drew first blood in the game when he fired over for Mayo in the 5th minute. Over the next five minutes Mayo increased their lead when Ross Egan punished two Leitrim fouls with points from the resultant frees.

After Mayo had more or less bossed the first eleven minutes of the action Leitrim got on level terms when Jordan Reynolds eluded his marker to hammer home a 12th minute goal.

But Mayo regained the lead almost immediately when Ross Egan fired over from play. After that Mayo increased their lead to 0 – 6 by the 19th minute with Oisin McLaughlin firing to the Leitrim net in this period while Evan O’Brien and Jordan Flynn chipped in with a point prior McLaughlin’s strike.

Jordan Reynolds replied with a 21st minute pointed Leitrim free. In the remaining minutes of the first half Mayo hit an unanswered six points with Ross Egan getting three points (one from a free) while Ryan O’Donoghue, Oisin McLaughlin Cathal Horan added a minor score each.

In this period Mayo’s Jordan Flynn received the game’s first yellow card for dissent. Mayo enjoyed a 1 – 12 to 1 – 1 interval lead and extended that advantage further after the restart when Tommy Conroy shot a 34th minute point.

Within a minute Jordan Reynolds answered with a point from a Leitrim free conversion. Mayo centre back Oisin Mullin was issued with a 36th minute yellow card.

After Jordan Reynolds’s free, Mayo held Leitrim scoreless for the next 29 minutes and hit an unanswered 10 points and also introduced all of their six subs to the fray.

Leitrim right half back, Sean Harkin was red carded for a 38th minute high challenge on Mayo's Ryan O’Donoghue. Mayo was reduced to 14 men some 11 minutes later when left half forward Oisin McLaughlin received a second yellow card.

A 44th minute Mayo penalty that was taken by Ryan O’Donoghue was well saved by Darren Maxwell. The Mayo spot kick was won by sub Colm Moran.

The scoring in the game was completed in the 4th and 5th minutes of added time at the end of the second half by Leitrim’s sole marksman, Jordan Reynolds and Mayo’s Ross Egan, who pointed a free each at opposite ends.

Talking Point: The gulf in class between Mayo and Leitrim was the main reason for a very poor  semi-final that was of little benefit to either team. GAA authorities need to address this issue in their future plans.

Turning Point: When the speedy Oisin McLaughlin hit Mayo’s  minute goal, he gave his side a six point advantage to kill off Leitrim’s challenge.

Ref Watch: Martin Flaherty kept firm control. He was even handed with regard to any discretion committed by players from either side with regard to the red and yellow cards he issued.

Highlight: Darren Maxwell’s third minute save when he quickly smothered Nathan Moran’s effort was an impressive. At the time Mayo had a number of forwards lurking to hit home a rebound but Maxwell’s save also ruled out this possibility.

Lowlight: The one-side nature of the game was a disappointment for both Leitrim and Mayo. With Mayo’s 11 point interval lead, the game was well and truly over at halftime.