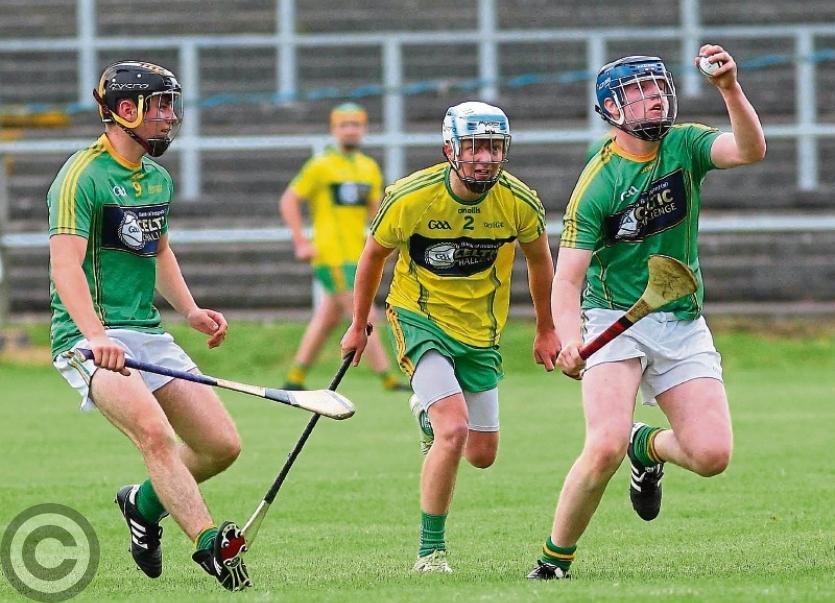 Leitrim’s brave bid for a place in the Celtic Challenge semi-final ended on Saturday when visitors Donegal upped their performance in the final quarter to crush the home side’s challenge.

Despite having to field a weakened team, due to injuries and absentees, the Hilary Phelan managed Leitrim side gave a very good account of themselves in the circumstances and matched Donegal stride for stride for three quarters of the game.

Donegal’s winning margin probably would have much greater at the end were it not for the Herculean efforts of Leitrim keeper Paul Lenihan, who time and again pulled of saves that denied what seemed to be certain goal chances for the visitors.

Goals at crucial stages of Saturday’s game by Donegal’s James Hartnett proved to be body blows to Leitrim’s of reaching the Celtic Challenge semi-final.

Donal Ó’Buchalla opened the scoring in the game against Leitrim with a third minute free. Two minutes later Liam Phelan had the sides on level terms when he coolly converted a Leitrim free.

Donegal’s Gavin Forde hit the game’s opening score from play when he put over a 6th point to put his side back in front. Liam Phelan hit back in the same minute with a point from play

The Ulster side regained the lead again when Oisín Randles fired over a 14th point. But the tit for tat nature of the proceedings continued with Liam Taylor splitting the Donegal posts five minutes later, to level the game for a third time.

Leitrim enjoyed a purple patch between the 19th and 29th minute when they grabbed a two point lead and put Donegal on the back foot after the Ulster side had slightly dictated matters in the opening 18 minutes.

Conor Hackett edged Leitrim in front for the first time when he whipped over a 26th minute point. Phelan doubled the lead when he converted his second free.

However Donegal regained the lead again just prior to the break when James Hartnett made a fine surging 30 metres run and fired to the net from close range to put his side into a 1-5 to 0-5 interval advantage, which certainly had come against the run of play in previous ten minute spell when Leitrim was well on top.

Donegal edged further ahead when Liam O’Doherty split the posts with a well hit 32nd minute ’65. Leitrim responded determinedly and reduced the deficit with Donegal to two after Cormac White and Shane Mallon whipped over a point each from play.

But Donegal answered by the 40th minute with Matthew Doherty converting a free and Liam O’Doherty adding a point from play that restored the visitor’s lead to a comfortable four points once more.

Leitrim was brought right back into contention when Cian Farry fired home a 41st minute gaol and reduced the Donegal’s advantage to the minimum. For the next seven minutes the outcome of the game literally hung on a knife edge, as neither side managed to register a score.

But that all changed when Mathew Doherty fired over a 48th minute point and put Donegal solidly on the road to victory. Over the next four minutes Donegal went on to stretch their lead to six points after Mathew Doherty pointed a ‘65’ and James Hartnett blazed home a goal from near the left hand side end line that sneaked into the Leitrim net.

This goal seemed to kill off the Leitrim challenge. Liam Phelan answered with a point from a 53rd minute free, which proved to be their final score in the game. Donegal added an unanswered five points from Donal Ó’Buchalla (2), subs John Boyle (2) and Russell Forde to seal the victory.

Main Man: All though he was on the losing team Leitrim full-back, Michael O’Brien gave a sterling performance at heart of his side’s defence when clearing his lines time and again when danger threatened. Michael was selected as man of the match.

Talking Point: The fact that Leitrim had to field an under strength team due to injuries and absentees was disappointing for all who turned out for the county side as well as for the team manager Hilary Phelan and his mentors.

Turning Point: When Donegal’s James Hartnett hammered home his side’s first goal on the stroke of halftime, it turned the tide in the game firmly in the visitor’s favour.

Ref Watch: John Emo was an impartial official and let the game flow at all times. Donegal mentors occasionally protested and sought frees in situations where their players were dispossessed. But Emo was happy that all Leitrim dispossessions were lawful.

Highlight: James Hartnett provided the highlight of the day when he ran 30 metres through the Leitrim defence and completed his run by firing home an unstoppable goal that changed the course of the contest.

Lowlight: The very poor attendance that turned out in Páirc Seán to support the young Leitrim hurlers in an All-Ireland quarter-final was disappointing for them and all involved with the team.