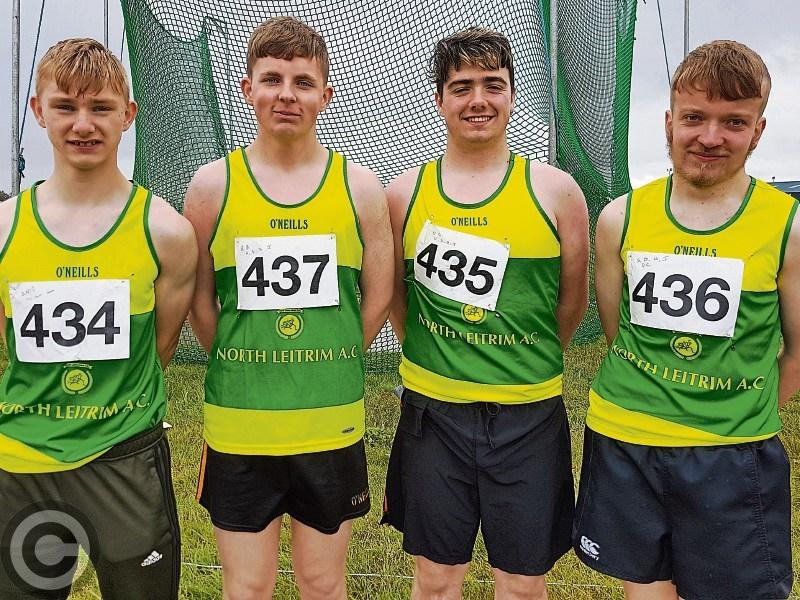 With medals coming in sprints, distance races, walks and throws, it was a superb day for Leitrim athletics with North Leitrim AC winning an impressive 46 medals on the day despite what was an admittedly poor turnout in some events.

The North Leitrim AC trio of Aaron Bradshaw, Nathan Cassidy and Oisin Carolan claimed four sets of medals in the U18 Javelin, Hammer, Discus and shot with Aaron taking the gold in all four events followed by four silvers for Nathan and four bronzes for Oisin.

The trio then teamed up with Eugene Doherty as the only team in the 4 x 100m relay for a fifth gold medal for Aaron.

North Leitrim claimed yet another clean sweep in the U16 Hammer when Cormac Fahy won ahead of John Fallon and Darragh Mitchell, Cormac also winning the U16 Discus while Darragh won his own gold in the U16 Walk.

Leitrim’s final clean sweep came in the U16 1,500m when Sarah Brady set a superb new pb of 5.13.86 with Carrick AC’s Laura Reynolds in second with clubmate Aisling Cullen in third.

There was double gold too for Ella McDaid and Diarmuid Giblin in the U16 80m & 250m Hurdles while their North Leitrim clubmates Niamh Carolan (U15 1,500m and discus) and Lara Mulvaney Kelly (U16 Discus & Javelin) both brought home double gold.

Carrick AC’s Ellis Conway was another double gold winner in the U18 200m and 400m while her clubmate Alannah McGuinness was a convincing winner of the U17 200m and a silver medalist over 100m.

Carrick also had a one-two in the U16 Javelin where Daniel Bosquette just got the better of clubmate Sean Brennan to take the title while Callum Whelan (Senior Javelin) and Ellie O’Rourke (U16 3,000m) also won golds on the day.

There were also gold medals for North Leitrim AC’s Sara O’Beirne (U14 Walk), Kian Duncan (U14 Hammer) and Helen Verachtert (U15 Javelin).

Other medal winners performances were as follows:

l In last week's Community Games Athletics results, the wrong name was supplied to us in relation to the U14 Girls Hurdles race. The race was, in fact won by Clodagh Tighe of Mohill. We are happy to clarify the matter.