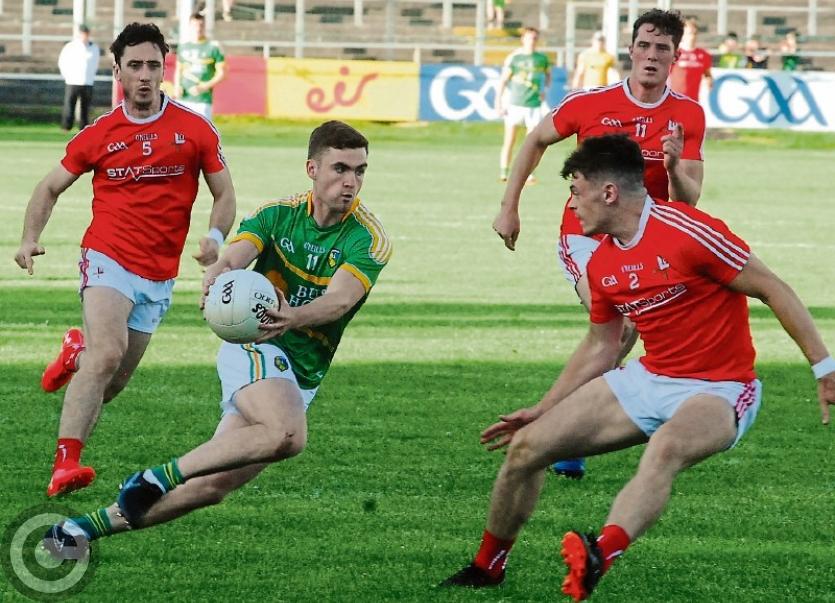 Ryan O'Rourke twists and turns the Louth defence before scoring during the second half last Saturday in Pairc Sean Mac Diarmada. Photo by Willie Donnellan

There are games you don’t want to end and last Saturday as Leitrim bombed over point after point on a balmy sunny evening in Pairc Sean Mac Diarmada, you just hoped that the final whistle would never sound on a truly remarkable Leitrim performance.

Even now, four glorious days later, you’d almost want to pinch yourself to see if you didn’t dream what frankly would have been a scenario almost too outlandish even for Hollywood!

Six players gone from the panel, including three starters, conceding an early calamitous goal from a bad kickout and Division 2 Louth looking a definite class above the Green & Gold after 25 minutes, all was not rosy in the garden for Leitrim last Saturday.

But a sending off, needless yet deserved and ultimately devastating for Louth, changed the course of this game and Leitrim, infused with an inner fire born of self-belief, defiance and unquenchable desire for victory, roared into this game in stunning fashion.

16 second half points, yes 16, flowed over the bar as Leitrim exceeded the 20 point mark in Championship football for the first time in their history, with an almost unbelievable 21 points from play!

Yet those bald facts don’t do justice to an mesmerizing Leitrim display - it wasn’t just the unfeasibly high score, it was the way Leitrim went about it, playing open, attacking football and just pouring forward in wave after wave after wave.

Louth simply never knew what hit them and despite kicking 1-12, they never looked remotely like challenging Brendan Guckian’s team in the second half.

For Brendan Guckian, there was quiet vindication in his belief that this young Leitrim team can play with the best. All along, Guckian has defended his team against the barbs and criticism of fans and all along he has steadfastly stated his belief in this team.

The level of abuse and bile on social media and internet forums all year has been staggering, and not just for this management team but previous ones too - something Leitrim players were very aware of and commented on last Saturday, so victory was immensely satisfying for Guckian & his backroom team.

It must have been tempting for the manager to shout his vindication from the rooftops on Saturday but Guckian chose the high road and taking the high but inwardly focussed road was obviously a lesson this team has learned well.

Our feature last week on “The Vanishing Team” highlighted just what Leitrim have been up against and the departure of six players from the squad after the Roscommon game was an enormous blow.

Crucially, Guckian and his players didn’t allow it to become a factor - instead it drew them closer, tightened the bonds in the team and perhaps allowed them to play with much greater freedom and adventure than before.

The waves of attack that pounded on Louth’s defence were unstoppable during that second half but just as important, Leitrim’s defence gained rock-like qualities, Louth’s desperate attempts to get a goal frustrated by a brilliant defence and the ever alert Diarmuid McKiernan.

You couldn’t pick out a Leitrim player who wasn’t superb last Saturday but there were a few stand outs - Damian Moran had the sort of day forwards dreamed about with six massive bombs flying over the bar, our man of the match.

Emlyn Mulligan rolled back the years with a majestic display, Jack Heslin, Darragh Rooney and Ryan O’Rourke ran Louth ragged while in defence, Paddy Maguire and Micheal McWeeney stood tall for a unit that were miserly to the nth degree.

Now, before we get accused of losing the run of ourselves, it must be stated that Louth were dominating the contest until the sending off. It allowed Leitrim to push an extra-man up in attack and still outnumber the Louth attack and Leitrim took each and every advantage.

Louth utterly collapsed and they were unable to counter the surging runs of Jack Heslin, Darragh Rooney and Ryan O’Rourke and as much as they tried to get back into the game, it left them incredibly exposed in defence.

But as much as Louth collapsed, this was Leitrim excellence and while we all acknowledge that a Monaghan juggernaut is coming down the road this coming Saturday, this is a victory that should, no must, be savoured!

Leitrim don't often get days like this and the impact of it cannot be underestimated. For the first time in a long time, there was noise after a Leitrim game as fans excitedly shouted, cheered and chatted about what they had just witnessed.

Scores of youngsters sought autographs and to witness young children mimicking their heroes by copying stretches as the Leitrim team warmed down is to fully understand the value of a victory like last Saturday.

It was unexpected, it came against the odds but it makes the days all the more worthwhile and no matter what happens against Monaghan, Leitrim's extraordinary victory over Louth will live long in this reporter's memory!

The task now is to repeat this sort of blistering form in future as in adversity, Leitrim seem to have found something exciting and inspiring to build on for the future. But for the moment, let us all bask in the glory of Saturday's victory.

Main Man: Tempted to name the entire Leitrim squad here with such a superb display but Damian Moran enjoyed the sort of day that players dream about.

Talking Point: With six players leaving the panel, hopes weren't high  last Saturday but a defiant Leitrim turned in an exhilarating display that suggests they may have stumbled on a winning formula!

Turning Point: The red card for Louth's James Craven turned this game upside down as Leitrim were completely transformed and Louth simply imploded.

Ref Watch: With one red, six black and four yellows, you'd think this was a bloodbath but referee Noel Mooney got most of the big calls spot on and while it might have been minimal contact for the Louth red, it was still the correct decision.

Highlight: The noise in the stands and on the pitch after the game - it has been a long time since Leitrim fans made such noise on a field after a big game and the sight of youngsters chasing Leitrim autographs was wonderful.

Lowlight: The only lowlight was the draw was not a little bit kinder to Leitrim - Monaghan is a tough reward for such a magnificent Green & Gold display.

See www.leitrimobserver.ie for in-depth report and reaction on Saturday's match.