Sending off changed the game - Bohan 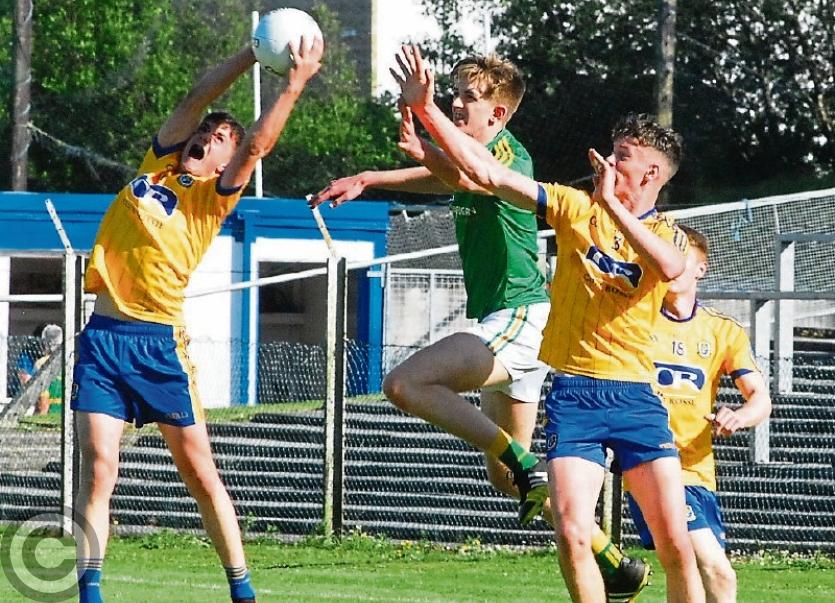 David O'Connell is outnumbered by the Roscommon defence late in Saturday's game. Photo by Willie Donnellan

As turning points go, it was easy to pick out the second half dismissal of Donal Casey as the big one and Leitrim U17 manager Gene Bohan agreed wholeheartedly.

“The goal after halftime was a bit of setback alright,” said Gene, adding “but I think the big change was the sending off. I didn’t see an awful lot in it, the first thing we’ll do is appeal to maybe have Donal available for next Friday against Sligo.”

The Leitrim manager didn’t want to make excuses but felt his team were primed for a big second half - “We were just saying to the lads at halftime that we probably should have been ahead at the break, we missed a few chances and we thought we had a super opportunity to push on.

“Donal was having an amazing first half and as far as I could see, the man was maybe holding his leg but that was neither here nor there, we can’t always be complaining.

“We’ll hold our heads up and after Donal went off, we weren’t good enough and going down to 14, they were always going to get the run on us, it is just very disappointing.”

Gene felt that the performance was more realistic than what happened against Mayo - “We know our result against Mayo wasn’t realistic and myself, Shane & Jimmy watched Roscommon play Mayo the following week and we reckoned we would have beaten that Mayo team on the night.

“We knew coming in here today we were up against a good outfit but we never fear a Roscommon team. They fancied themselves a little bit but we knew if we worked hard enough, we have belief in the panel of players that we have.

“There is a very talented bunch of lads there and only for that bloody sending off there today, I think we’d have been in contention right up there to the end. We’ll pick them up alright, that won’t be the issue.”