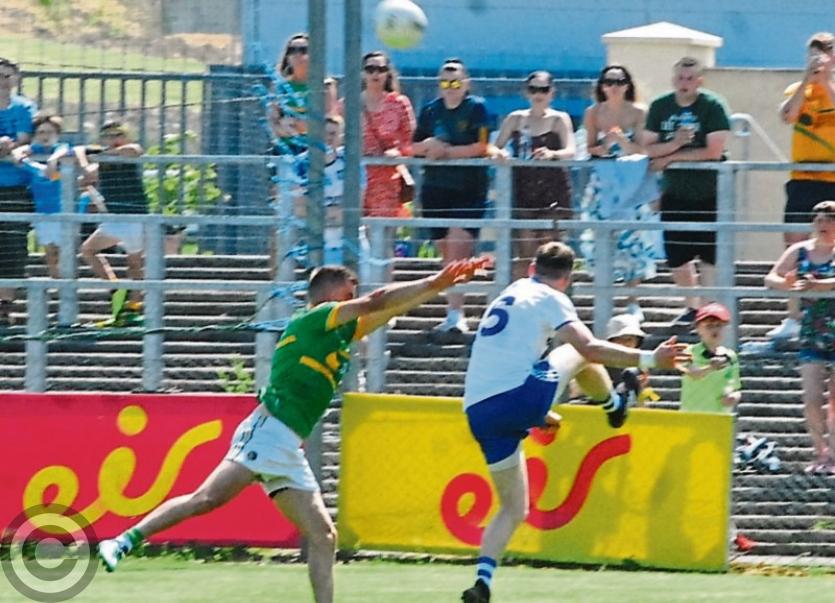 Monaghan's All-Star Conor McManus sends the ball over the bar despite an attempted block from Paddy Maguire in the first half. Photo by Willie Donnellan

Roasting conditions and the shadow of Paddy Maguire chasing him around Pairc Sean Mac Diarmada made for a tough afternoon for Conor McManus but one of the country's finest forwards still emerged with a personal tally of five points.

Having patiently signed every autograph and posed for every selfie sought by both Monaghan and Leitrim fans, Conor gave his thoughts on Monaghan's performance and acknowledged it was a difficult afternoon despite the 1-19 to 0-9 scoreline (see report).

“It was tough, we wouldn't be accustomed to that sort of weather for prolonged periods of time in Ireland but it was the same for us as it was for Leitrim.

“It was just about getting off to a fast start and Leitrim put it up to us early on. We were slow to get going but as the game wore on we grew into the game and probably took control towards the end of the half but conditions were tough.”

Leitrim appeared to be a lot more running in the opening stages but Conor insisted it wasn't a deliberate decision to conserve energy.

“It wasn't a tactic, no. You go out and you give it your all from the start and Leitrim were full value for their place in this round of the Championship because they were full of energy and full of life early doors. It took us until later in the game to wear them down.”

A trip to Pairc Sean to face a team they may have been unfamiliar with could have been viewed as a potential banana skin but Conor felt the most important thing from a Monaghan point of view was to focus on their own game.

“It can be tricky but I suppose the key to it is just focusing on yourself and what you can do for you own team.

“There is no point getting caught up too much on the opposition, you just have to focus on your own performance and trying to improve that every day you go out and it is a case of trying to do that more so than anything.”