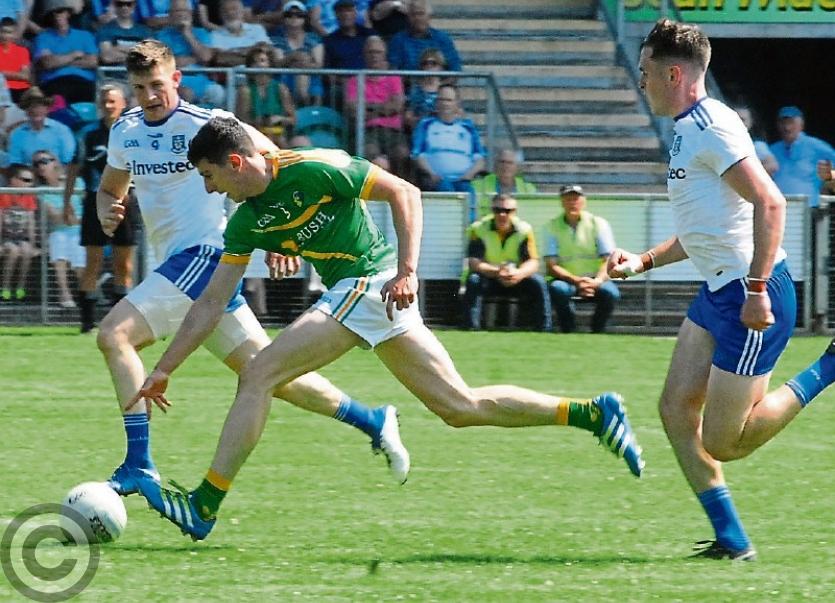 It might be hard to comprehend for an outsider after a 13 point defeat but Leitrim’s players left Pairc Sean Mac Diarmada last Saturday full of optimism for the future!

The Observer spoke to captain Donal Wrynn, Jack Heslin & Micheal McWeeney on a sweltering pitch and while there was disappointment at the scale of the loss, all three players are confident that the future is bright.

Donal Wrynn was first up and the Leitrim captain stressed “I’ve been saying it all year that there is massive potential in this group. See at Jack Heslin there today against a Division 1 team, three points. Ryan O’Rourke & Darragh Rooney are capable of the same.

“There is loads of potential in the group and it is just a matter of sticking together, doing the work and making those commitments to get up to that higher level. I think we have a young team and the crucial thing is to keep it together.

“I don’t know what is happening with Brendan but it is important to keep everyone, players, backroom personnel and management.”

Jack Heslin may be one of the young guns on the team but after delivering three points and a scintillating display, the very first words out of the Gortletteragh men were of the future - “There are positives in it, we were competing with a Division One team there and for the first half, I don’t think we looked out of place.

“What is the average age? 21, 22? Most of us have only one or two championship games under our belt and experience will go a long way with this group. The biggest thing is to keep this team together.

“We’ll bring the boys back in next year and it will strengthen it up again and hopefully we will get everyone together for the league and we’ll give it a good lash at Division 4. That’s the aim. We get up to Division 3, that’s better games again.

“This is a good group, this is a tight group and hopefully we do stick together. I do believe we will stick together for the next few years and we will bring it to another level.”

Micheal McWeeney is a veteran compared to Heslin but his excitement was no less palpable - “I don’t know how long it has been since Leitrim played four championship matches, that is something we want. There is definitely something there to work on for the future.”

Micheal left nobody in any doubt that the Leitrim need to look after this crop of players to ensure the player drain of recent years doesn’t happen again - “It is definitely up to the County Board, management, everybody, to hold onto these players. Don’t let them drift away for work - you don’t see that in other counties. It is up to them to get the players work, get them set-up and be appreciated.”

Micheal also wants to see continuity going forward and backed Brendan Guckian to stay on for another year - “I think I speak for a lot of guys when I say we want to see Brendan there but obviously that is up to himself.

“There is no point us talking about it but we definitely need stability, we need the same management team to keep the players involved and not just a clean sheet again, not just drop everything and start from scratch.”

The defender also highlighted the impact made by former Leitrim players Enda Lyons and Philip Howard in the backroom team - “I think that was the difference with Enda this year with Strength & Conditioning. I don’t think you’d notice the difference between the two teams today and Enda has to take serious praise here today with Philly (Howard).

“There is a great management team but what them boys have done for this year is serious. S&C, it is obviously our proper first year getting into it but it made a big difference out there today.”