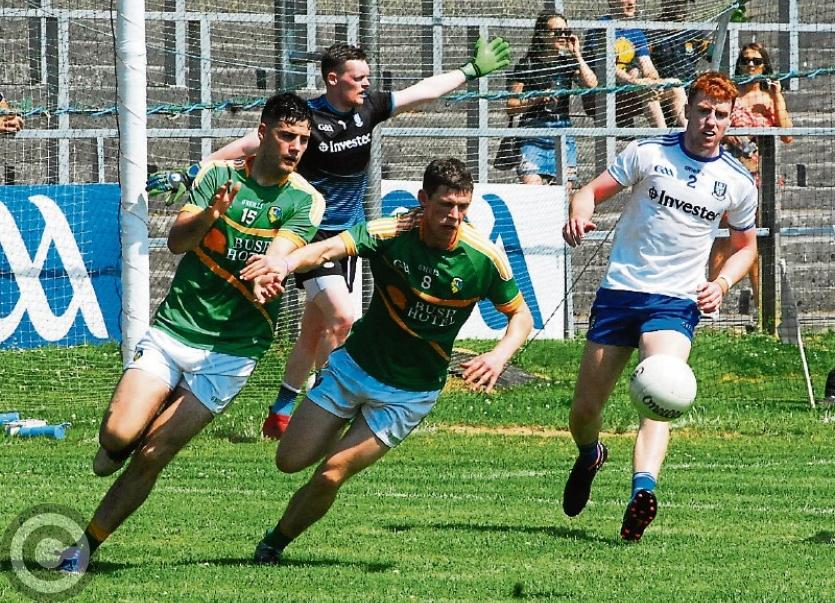 Damian Moran and Aidan Flynn chase after a breaking ball in the Monaghan goalmouth. Photo by Willie Donnellan

Experience is always key in any competitive sport and both Donal Wrynn and Jack Heslin felt that Monaghan’s greater experience played a massive role in Saturday’s All-Ireland Qualifier in Pairc Sean Mac Diarmada.

Leitrim captain Donal Wrynn commented “We did test ourselves and even though we did fairly well in the first half, maybe we could have been closer with just a little bit more experience and a little better at taking our chances and winning frees in the crucial areas.

“They played the first half fairly smart and just got away from us and we were always chasing the game from then on. If we had taken either of those two goal chances and there was a bit of pressure on them, we might have been closer or even ahead of them at halftime, I think we really could have had a go at them.

Jack Heslin pointed out that missed chances cost Leitrim but the experience of big games against teams like Monaghan will stand to them - “We had two or three goal chances and we didn’t take them and they did, they took their points and kicked some serious scores, Beggan kicking frees from 60 yards out.

“Maybe we just need to get more clinical inside and then we will beat bigger teams. We probably burned ourselves out early on but we’re still working on finishing out games against these bigger teams.

“Roscommon was the same thing, we probably need to kick the ball a bit more, save ourselves a bit rather than killing ourselves running through the middle but that will come with playing more games.

“We need to learn these things and I think it will all come with experience, there are definitely positives in it and the more we play, the better we get.”

It was a point Donal agreed with but the Fenagh man said the conditions on the day dictated some of the play - “Maybe so, there was a slight breeze as well so it was slight bit trickier to kick but maybe we needed to work the ball through hands a little bit more with that breeze. That’s why maybe when we got to that point, they were able to get back, just the fact that we were moving that little bit slower and block up the space and maybe didn’t allow the space for us.

“Physically, they are a fairly experienced outfit and you could see they have years of strong conditioning work done and maybe we just don’t have that yet.”

Saturday's game was played in extreme heat and Donal admitted it tested him to the limit - “It was fairly difficult out there, I’d say I’m fairly dehydrated now at this stage. It is tough to keep going in these conditions, the worst I’ve played in and I’ve played in America and I don’t think it was this warm or this difficult. I just found it really hard but look, it was the same for them, we can’t use that as an excuse.”