Monaghan win as expected but Leitrim show signs of hope 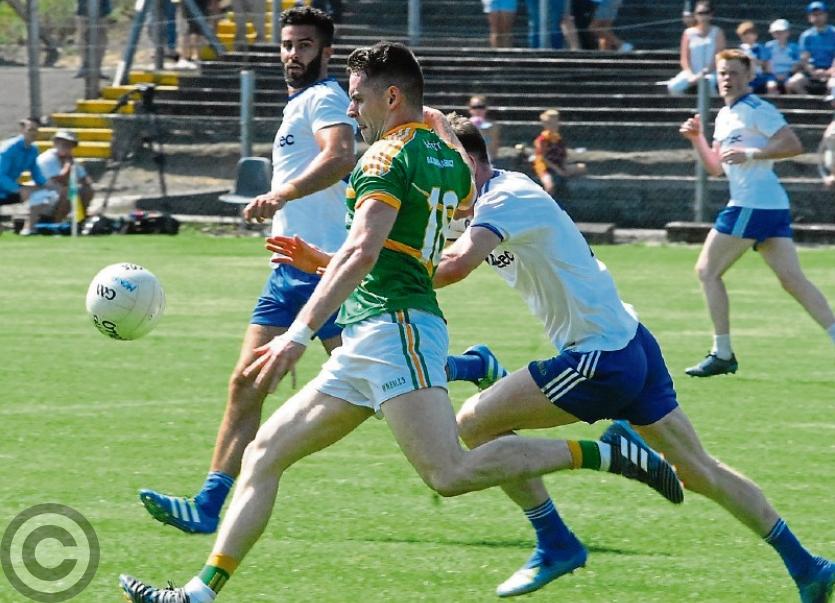 Eoin Ward gets his shot away despite an attempted block from a Monaghan defender last Saturday. Photo by Willie Donnellan

After the highs of Louth, a bump back to reality for Leitrim's footballers against Monaghan last Saturday but it was a gentle bump that nevertheless spoke of hope for the future and potential.

A physically powerful and tactically astute Monaghan absorbed Leitrim’s early fire and brimstone and rode out the storm comfortably in Pairc Sean Mac Diarmada to seal their place in round 4 of the All-Ireland Senior Championship Qualifiers.

Yet despite a 13 point loss, it was hard to find too many Leitrim supporters who were irate or upset last Saturday evening. In fact, it was just the opposite as most Green & Gold fans were happy heading for home, happy that they may just have witnessed the first stirrings of a new competitive Leitrim team.

Leitrim played with a spirit and verve that fans have been crying out for, for some years, attacking their vaunted rivals in the first 20 minutes, creating two goal chances and holding Monaghan to three points apiece after the first quarter.

Leitrim’s hard running, intense work-rate and fearlessness might even had a few Green & Gold supporters dreaming of a major shock. But Monaghan, just like Roscommon had done, ruthlessly, quietly and so efficiently shut down those dreams.

Seven points to one before halftime suddenly left Leitrim with a mountain to climb against a Monaghan team who adopted different tactics in the searing heat last Saturday as they let the ball do all the work and watched as Leitrim’s intense workrate gradually slowed and faded.

In the second half, with a comfortable gap established, Monaghan started to run the ball and exploited tired Leitrim legs, slowly but surely expanding their lead before a final cruel blow when Conor McCarthy applied the coup de grace with a goal two minutes from time.

Just like the Roscommon game, Leitrim were left cursing missed chances against a team that did not miss when it truly mattered and although Monaghan were a lot more wasteful than Kevin McStay’s side, they were much more miserly in defence.

Yet there was a much different feel to what transpired against Roscommon - first of all, Leitrim produced this performance after suffering the loss of six players from the panel, four of them quite probably first choice selections.

But in their absence, Leitrim look to have found a new spirit and a new way to play where the pace of Jack Heslin, Darragh Rooney and Ryan O’Rourke was allied to surging runs from Shane Quinn, Aidan Flynn and Paddy Maguire.

Realistically Leitrim were never going to repeat their amazing 25 point haul of the Louth game and once they were faced with defenders of the calibre of Karl O’Connell, Conor Boyle, Ryan Wylie and a midfielder like Darren Hughes, scoring chances were always at a premium.

The chances of Division 4 Leitrim shocking Division 1 Monaghan, the only team to beat Dublin in League or championship this year, was practically nil when you consider the shock Malachy O’Rourke’s side got when falling to Fermanagh in the Ulster Championship.

But what last Saturday may allow Leitrim to do is lay some foundations - the win against Louth, with its incredible 25 points, could possibly be explained as an aberration but playing with fire, with spirit and resilience against a team as highly rated as Monaghan is the sort of performance a future can be built upon.

Leitrim will now attack next year’s Division 4 with a hell of a lot more confidence than they might have before and with ambitions expanded and although the presence of Antrim and Derry won’t make it easy, Leitrim will attack 2019 with fierce ambition.

The question of whether Brendan Guckian will be at the helm is another matter. The St. Mary’s Kiltoghert clubman has had two tough years and a lot of crazy criticism given where Leitrim football is coming from over the last few years.

The road ahead is still difficult but Guckian has laid solid foundations and introduced 17 new players to championship football but you have to wonder if those foundations could conceivably be jeopardised by a change in management.

The manager has earned the right to decide if he wants to stay on and the feeling from chatting with the players who saw action last weekend is they want Guckian to stay on too.

There looks as if there could be a bright future for Leitrim football but the right decisions need to be made in the coming weeks if the Green & Gold are to progress further in 2019 and beyond. It is not a quick process but this is mainly a young team with lots of years ahead of it.

But for the first time in a few years, Leitrim will look back with reasonable happiness on the championship and justified hope for the future.

Talking Point: Leitrim lost six players from the panel after the Roscommon game but it might have been the best thing that happened. A more open, faster and fluid attacking style developed and it certainly has won the approval from the county's fans.

Turning Point: None as such as Monaghan always looked as if they could lift it but if Leitrim had got one of their two missed goal chances, who knows what might have happened.

Ref Watch: Niall Cullen of Fermanagh did an overall good job and was consistent but with one exception. A yellow card for Conor McManus looked like it should have been red as the Monaghan man's fame may have saved him.

Highlight: Jack Heslin's wonderful running from deep caused consternation in the Monaghan defence, one of the few times they looked rattled.

Lowlight: Monaghan's goal was more than a little harsh on a brave Leitrim whose efforts deserved more than a 13 point loss.