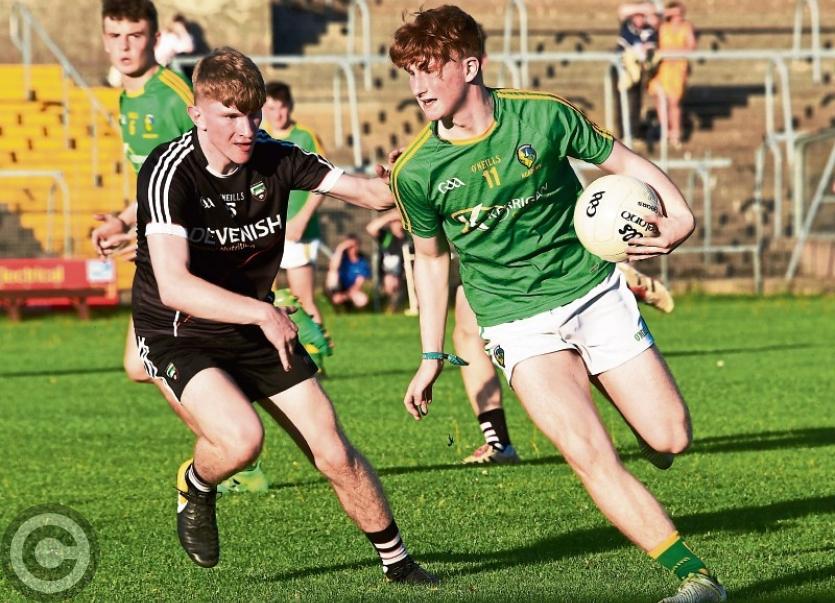 A stunning late, late blast that netted 2-3 in nine minutes of injury time saw Leitrim snatch their first victory in the Connacht U17 Championship.

It was even more dramatic than that as Leitrim's goals came in the last two minutes of over nine minutes of added time as Sligo's legs, down to 14 players since just before halftime, finally faltered.

It was tough on a Sligo team who had led the majority of this encounter but for a Leitrim team who kicked some inexcusable wides, it was a testament to their spirit and drive that kept them going.

The goals came from Paul Keaney and David O'Connell, the St. Mary's duo benefiting from defensive slips to finally put the game beyond the reach of the home team in Markievicz Park last Friday.

No more than the Roscommon game when a sending off changed the course of the game, another sending off gave Leitrim a lifeline. Sligo corner-back Mark Connolly McGowan received a black card for a blatant off the ball block on a Leitrim attacker.

The decision, correct as it was, infuriated Sligo fans who felt that at least three Leitrim players had committed similar offences in full view of officials and nothing was done.

Sligo swept into an early lead with two frees from Lee Deignan and one from Conor Finn inside the opening three minutes as Leitrim again started slowly. But as in the previous games, Leitrim hit back with Tom Prior finishing off a nice move with a 35 yard point before a nice run from Paul Keaney saw him sidestepped defenders to point on four minutes.

An Oisin Bohan free levelled matters before an Eoin McLoughlin interception and a good run from Tom Prior led to a point from Jamie Quinn.

However, instead of pushing on, Leitrim suddenly found themselves playing second fiddle as Sligo took over with Conor Finn pointing after McLoughlin had been hit high and hard to lose possession.

Sligo almost goaled when Ronan Wilson broke through the Leitrim defence only for Matthew Earley to make a good save, Eoghan Sweeney tapping over the rebound.

Sligo, despite a bad wide, saw David Barrett finish off a length of the field move on 12 minutes after a Leitrim attack broke down. Jamie Quinn put a free badly wide before Conor Finn managed to get to a crossfield pass and scored from distance on 17 minutes.

Matthew Clavin threaded a good pass through to Sean Doyle but desperate Leitrim defending managed to see his shot fly over the bar.

Leitrim finally ended a barren spell with a Jamie Quinn free and a lovely long range effort from Colin Moran while a goal from a Paul Keaney free was disallowed for a square ball infringement.

The big moment came a minute before halftime when Sligo's Connolly McGowan blatantly body-checked a Leitrim player and got a black card to go with his yellow and his marching orders.

Leitrim had two missed chances before halftime as Sligo led 0-11 to 0-6 at the break. Oisin Niblock replaced Daniel Maguire for the second half but Leitrim opened with three missed chances, including a David O'Connell free hitting the post.

Paul Keaney scored on a nice counter attack but Lee Deignan replied with his own free on six minutes. Oisin Bohan (free) and Keaney (50) cut the gap to three points after ten minutes but three poor shots saw Leitrim miss some good chances.

Lee Deignan scored a good point after an excellent run but Shane Mallon replied with a good point.

Then came another turning point for Sligo as the impressive Conor Finn was forced from the game with a hip injury as he fell heavily after an aerial clash on 19 minutes, the game held up for six or seven minutes.

Eoin McLoughlin was somewhat harshly yellow carded while Sligo were sure they had a goal only for Matthew Earley to make a wonderful save on 26 minutes while they also missed an easy free and save a shot come off the post.

Oisin Bohan put over a free in the last minute of normal time but with nine minutes of added time, there was lots of time for Leitrim. Francie Davitt, introduced as a sub less than a minute before, made an instant impact with a point two minutes into added time.

Leitrim, however, then kicked three very bad wides before Tom Prior levelled the scores after 36 minutes.

And almost immediately, Leitrim hit the front when a poor clearance was snapped up and a quick counter-attack saw Paul Keaney bury the ball in the net on 37 minutes.

From the kickout, Shane Mallon fired over a good point before the coup de grace arrived after over nine minutes of added time when David O'Connell blasted the ball to the Sligo net, a slightly misleading final margin of victory for Leitrim.

Main Man: Matthew Earley kept Leitrim in this game when they were in real danger with a superb save while Paul Keaney, Colin Moran, David O'Connell, Patrick McKenna, Eoin McLoughlin and Tom Prior stood out.

Talking Point: This long awaited victory was incredibly Leitrim's first win at Minor/U17 level in Connacht since the Green & Gold defeated Sligo, also in Markievicz Park, to reach the Connacht Minor Final 16 years ago in 2002! And that is definite progress.

Turning Point: A black card, on top of  a yellow, for Mark Connolly McGowan gave Leitrim a lifeline just before halftime as Sligo led by five points at the time.

Ref Watch: Referee Paul Lydon angered Sligo supporters with the failure to award up to three black cards for Leitrim players and they may have had a point. His one black card did have a huge effect as it ended up  leaving Sligo a man short, deservedly so, for all of the second half.

Highlight: Matthew Earley made a huge save at a time when Sligo led by three points, a goal then would surely have sealed the win.

Lowlight: For a long time in this match, Leitrim's play was disjointed and some of the shooting left an awful lot to be desired and hampered their efforts.