Guckian saves the day in thriller 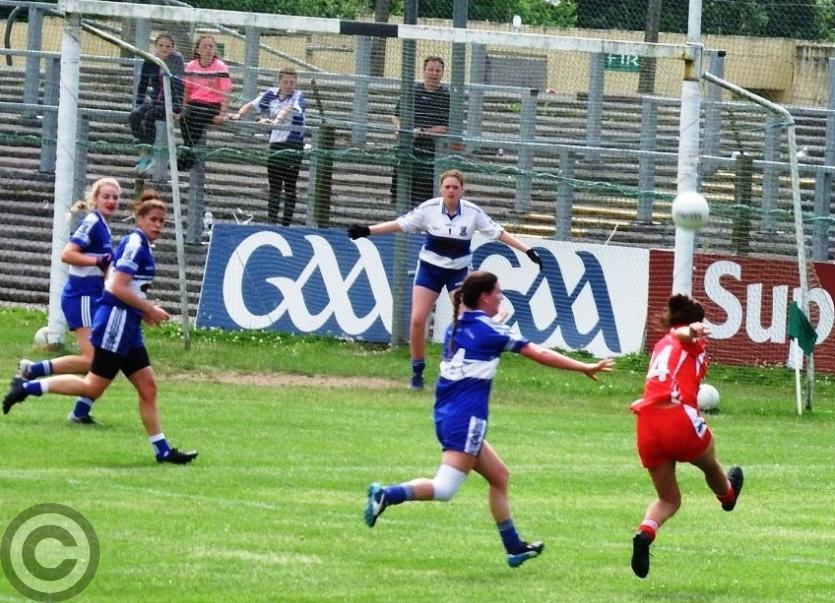 Action from the Ladies Division 3 Final

Bornacoola St Mary’s captured the Ladies Division 3 League title on Sunday afternoon last after a nail biting and tense encounter that could, in truth, have gone either way down to the final whistle.

A match that swayed one way and then the other at various stages throughout was a most enjoyable encounter and one which served to illustrate the talent that lies in the ladies game at club level.

Dromahair carried an unbeaten league run into this fixture, including a three point victory over their rivals when they last met on April 1. However, on this occasion, greater efficiency in front of goal probably was the key difference between the sides.

It must be pointed out that Bornacoola St. Mary’s netminder Caroline Guckian kept her side in the hunt with a number of fine saves throughout the game, two in particular when she faced one on one situations, in what was a Player of the Match performance by the young keeper.

The match opened with both sides attacking at will but staunch defending on either side kept the scoreboard idle until the fourth minute when Kelly Howard bore down on the Dromahair goals. Her effort was well saved by Aoife McTiernan in the Dromahair goals but Sarah Reynolds in following through blasted the ball to the net and the winners were into their stride.

The lead didn’t last too long as Dromahair launched waves of attack. First Aisling Clancy pointed and the pressure eventually paid off as midfielder Edel Kelly finished a fine move to the corner of the Bornacoola/St Mary’s net to put the northern side in the lead.

With continued mounting pressure in the remainder of the first quarter and despite some excellent defending by the Bor/Mary’s rearguard, the Dromahair side was awarded a penalty which was converted expertly by full forward Aisling Clancy to open a four point lead.

Gradually the Bor/Mary’s girls clawed their way back into contention over the second quarter and with some fine approach play, they dominated this period Aisling Leahy leading the charge with three points including two frees, one from Kelly Howard and a fine left footed effort from Sarah Reynolds.

Dromahair only managed to add a further score in this half from Amy Fowley as the teams headed to a well earned half time break on level terms 1-5 to 2-2.

Amy Fowley opened the second half scoring with a Dromahair point as the game moved from end to end. Howard had the teams back on terms shortly afterward with point. As the third quarter rolled on it became obvious that it was going to take something special to separate these teams.

Hannah Reynolds picked up a ball and drove through the heart of the Dromahair defence to rifle an unstoppable shot to the roof of the net to open a three point lead. Amy Fowley reduced the deficit with a point as Dromahair came raiding.

Goalkeeper Caroline Guckian came to her sides rescue with a point blank save to foil a Dromahair break inside the defence and the danger was averted.

Aisling Leahy with a point, had the winners back in a three point advantage before a long looping shot from Edel Kelly went beyond the reach of Guckian to end up in the net and the game was in the melting pot again as the match entered the last seven minutes all square.

Leahy and Niamh McInerney traded points from frees as two tiring sides, who had given their all searched for a winner. As it turned out the final chance came to Kelly Howard and she duly popped over the last score of the contest to edge the result in favour of Bornacoola/St Mary’s.

In what was an absorbing match between two very evenly matched teams both sides are to be complimented on the manner in which they approached and delivered this spectacle that exhibited all that is best in ladies football in the wide open expanses of Páirc Seán Mac Diarmada.

Referee Pat O’Toole must also be complimented on his handling of the match and indeed his sensible approach towards the use of water breaks that were provided to players who had to endure testing conditions.

After the match Leitrim Ladies Chairperson Michelle Reynolds presented the cup to a delighted winning captain Lorraine Guckian in the presence of her delighted teammates.