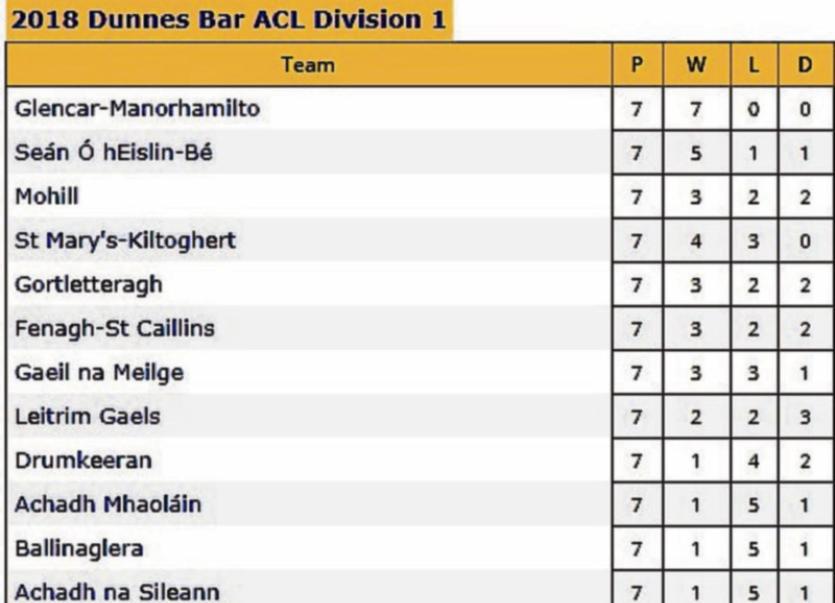 As the big two of recent years Glencar/Manorhamilton and Mohill meet tonight (Wednesday July 11), the big talking point in the Dunnes Bar Division 1 is Aughawillan slipping close to the relegation zone.

Aughawillan suffered a one point defeat last Saturday in the latest round of League games, a defeat all the more agonising in that it came against neighbours Ballinamore Sean O'Heslin's, 0-11 to 0-10.

The win keeps the Ballinamore clear in second but it drops Aughawillan into the relegation zone, level on three points with Ballinaglera and Aughnasheelin and only separated from the bottom two places by the fact that they have scored one point more than the Glera men.

Ballinaglera, who conceded a walkover to Glencar/Manorhamilton last weekend after the sad and untimely passing of Kelly O'Brien, face a massive clash with Gortletteragh who saw their League push suffer a big blow with a 2-10 to 0-9 loss at the hands of St. Mary's Kiltoghert.

The win lifts the Carrick men into fourth place in the table and they face two interesting clashes with Ballinamore Sean O'Heslin's tonight (Wednesday) and Aughawillan on Saturday, the Aughawillan men desperate for a win.

Aughnasheelin's hopes of avoiding relegation took a big blow when Mohill, still trying to defend their three-in-a-row of League titles, inflicted a 3-22 to 0-15 defeat on them, leaving them with three points and a scoring difference of minus 57.

Drumkeerin remain just a point above the bottom three after they suffered a costly 2-9 to 1-10 loss to Leitrim Gaels, the Gaels recovering from a six point deficit and a sending off to record their second win of the campaign.

Drumkeerin face fellow Intermediate championship rivals Fenagh St. Caillin's this Wednesday and then Melvin Gaels on Saturday with the Fenagh men on a high after recording a 3-7 to 1-10 win over Melvin Gaels, a victory achieved without Donal Wrynn and Ryan O'Rourke who was black carded very early in the contest.

The fixtures for this weekend see some very interesting clashes - the meeting of League champions Mohill and table toppers Glencar/Manorhamilton tonight in Mohill (8pm throw-in) may clash with England's World Cup Semi-Final but it will be a lot more interesting.

Unless both Ballinamore and Manor suffer epic collapses, it is hard to see Mohill retaining their title this year and a win for the Manor men would confirm their place in the Division 1 Final.

Glencar/Manorhamilton take on Leitrim Gaels with Ballinamore rounding out the programme when they host Ballinaglera as part of a double header with a Division 2 clash against Kiltubrid. 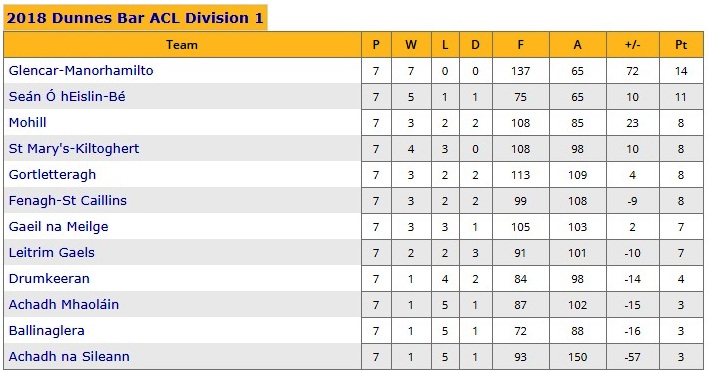