Promotion race to be settled over next four days! 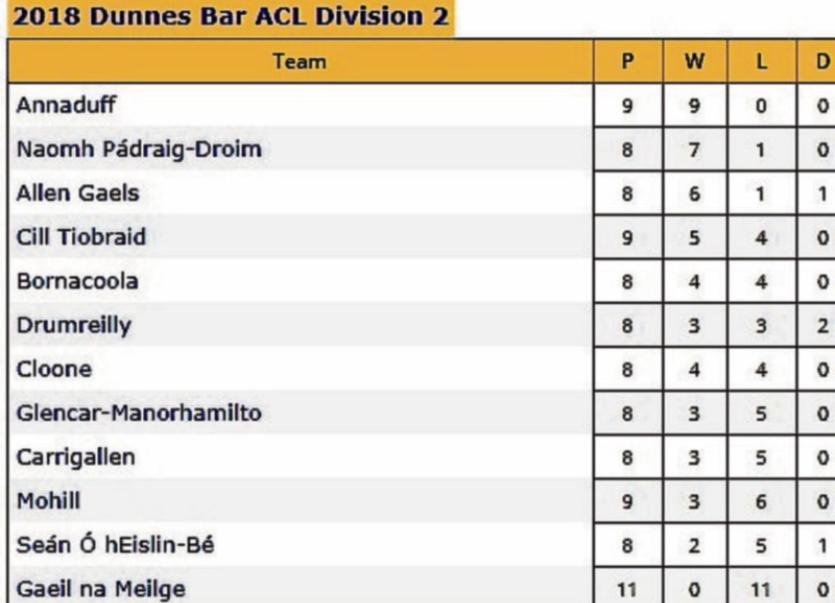 The fixture planners couldn't have fixed it if they wanted to as the promotion battle in the 2018 Dunnes Bar Division 2 campaign literally comes down to the next four days.

Leaders Annaduff look in a great position to return to Division 1 next year with the perfect record with nine wins from nine outings but incredibly, they are still vulnerable as their last two games are against the teams desperately chasing them.

Annaduff had a successful week with a 2-9 to 0-6 victory over Melvin Gaels followed by a walkover against Melvin Gaels, a decision that could come back to bite Leitrim GAA in the backside.

St. Patrick's Dromahair sit four points behind after a 3-13 to 0-6 destruction of Ballinamore Sean O'Heslin's second team but they have a game in hand and they have yet to play Annaduff so two victories would leave them level with Dromahair and ahead by the head to head.

Allen Gaels, five points behind after a costly draw last Wednesday with Drumreilly on a 4-11 to 3-14 scoreline and a hard fought 3-10 to 0-13 victory over Glencar/Manor's second string are still not out of contention as victories in their next two games could see them right back in the mix.

The Drumshanbo men travel to face Dromahair tonight (Wednesday July 11) knowing a victory would lift them over the north Leitrim men into second place while they take on the leaders Annaduff on Saturday at home so two victories would leave them one point off the top of the table with one game against Cloone to come!

Of course, both scenarios fall down if Annaduff win next Saturday against the Drumshanbo men, a win would leave them definitely promoted while they also have a game against Dromahair to come.

Kiltubrid and Bornacoola both saw their slim chances of making a late charge end when relegation battling Carrigallen and Mohill both had big wins. Carrigallen defeated Kiltubrid 2-8 to 1-10 to lift them to six points, one ahead of Ballinamore's second string who suffered a heavy loss to Dromahair.

That loss also meant that Mohill leapfrogged O'Heslin's after they surprised Bornacoola 3-8 to 2-8, the Bors also losing out to Drumreilly by two points on a 3-11 to 2-12 scoreline.

Ballinamore do have a game in hand over both their relegation rivals and it could be a big one as their outstanding game is against Carrigallen and it wouldn't take much for the winner of that game to survive and the loser to drop to Division 3.

The final game of the programme saw Cloone beat their neighbours Mohill by 2-13 to 1-6, a result that leaves them safely mid-table with three games to go.

In theory, Kiltubrid, Cloone, Bornacoola and Drumreilly can all catch Dromahair and Allen Gaels but with the north Leitrim men playing the Drumshanbo side, at least one of the teams will be on 15 points, a total none of the chasing teams can match.

There are also three games down for decision next Wednesday meaning the future of the Division could be completely decided over the next eight days. 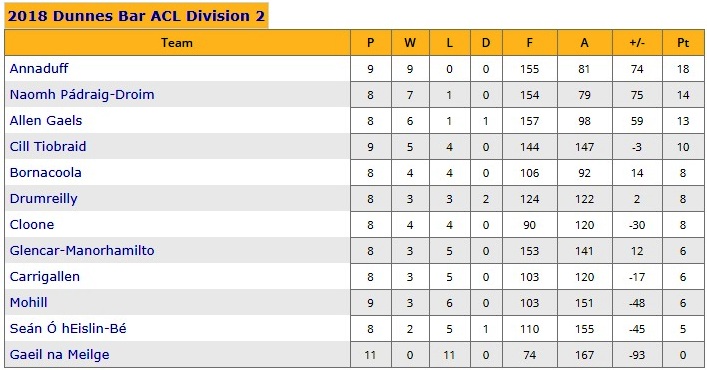