Galway too good for Leitrim 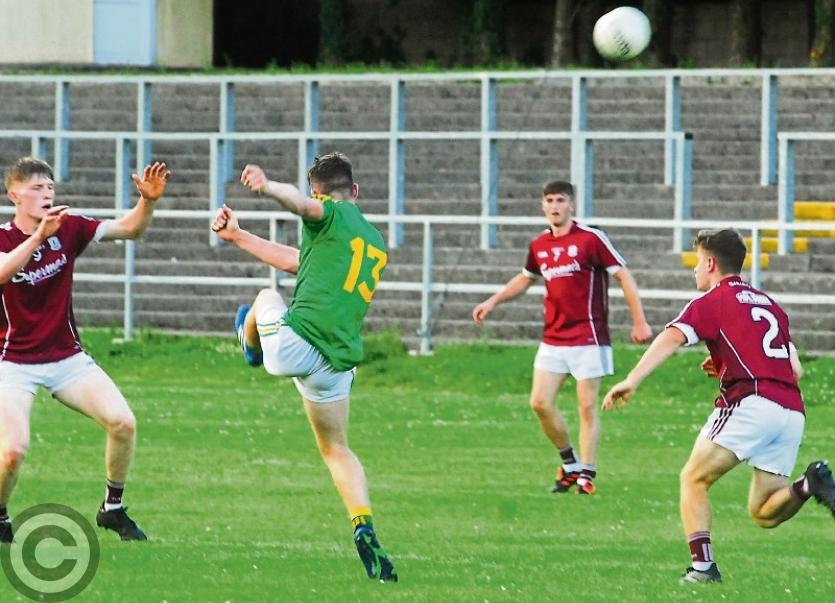 An impressive Galway ended any hopes Leitrim had of finishing the inaugural Connacht U17 Championship on a high with a display of clinical brilliance.

Leitrim had hoped they might be able to shock the Tribesmen who were already in this Friday’s Connacht Final but there was to be no let up in Pairc Sean Mac Diarmada as Gene Bohan’s side were ripped apart with stunning efficiency and authority.

What made Galway’s display all the more remarkable was the lack of speed with which the Tribesmen opened up the Green & Gold rearguard. When Roscommon and Mayo caused Leitrim problems, they moved at 100 miles per hour, all intensity and speed.

Galway calmly and methodically picked their way through the Leitrim defence, playing with the sort of assurance and system you’d expect from a Senior team and all with a diminutive full-forward line that ripped Leitrim apart.

In the losses to Mayo and Roscommon, Leitrim could at least point to extenuating circumstances but not here as Galway were just a class apart, their movement and use of the ball every bit as good as their reputation suggests.

What really set them apart, however, was how they could run up big scores in a short of space of time - Leitrim were hit by 3-3 in just five minutes midway through the first half and another 1-4 in the first eight minutes of the second half.

Leitrim, as they proved in other games, fought manfully, bravely and never gave up but, apart from the first few minutes when Leitrim should have had a goal, the Green & Gold were never truly able to threaten the unbeaten Tribesmen.

For Leitrim, this will be remembered as a frustrating campaign - the row over the Mayo game and the long wait for the second contest against Roscommon where the sending off of Donal Casey tipped the scales against them.

The victory over Sligo was hard fought and showed the best spirit of this team who will still feel that they didn’t quite get to show what they are fully capable of. There is talent, however, in this squad and don't be surprised if many of them go on to play for the Green & Gold in the years ahead.

Leitrim got off to a blistering start with frees from Jamie Quinn and David O’Connell inside the first three minutes but it should have been much better when a great move opened up the Galway rearguard.

Tom Prior’s pass found Caolan but his shot was blocked by Galway full-back Sean Black with the ball rebounding to David O’Connell whose shot was smothered by Galway keeper Donie Halloran, the ball being worked cleared.

To make it worse, Galway went straight down the field and Eoghan Tinney fired over the bar to open their account. Tom Prior scored a great point, set up by a great catch from Oisin Bohan, to extend the lead but Galway were now moving.

Matthew Cooley put over two quick first points to tie the scores and on 16 minutes, Galway took the lead with a point from Eoghan Tinney.

That unanswered three points was just the beginning as Liam Judge intercepted a Leitrim kickout and one quick handpass left Daniel Cox with a virtual tap in. Ryan Monahan put over a free before Galway struck for a second goal.

Aidan Halloran and Tinney combined to set up Cox for a nice finish and suddenly the game was beyond Leitrim. It got much worse - Oisin McCormack swept a shot over despite falling as he shot and from the kickout, Liam Judge soloed through to blast to the net.

Paul Keaney halted the onslaught with a point before Monahan and Donal Casey swapped scores that left Leitrim trailing 3-7 to 0-5 at the halftime break.

Galway had no intention of letting this game slip and Aidan Halloran brought a good save out of Matthew Earley but the points continued to flow over with Monahan, Conor Raftery, Judge and Cox all on target in the first eight minutes.

A fourth goal soon followed when Galway halftime sub Eanna McCormack and Tinney were instrumental in a flowing move that ended with Oisin McCormack finding the net.

Oisin Bohan got Leitrim’s first score of the second half 11 minutes in and added another from a free. It would turn out to be Leitrim’s most productive spell as Shane Mallon saw a goal shot blocked after a quick free and Oisin Bohan had a shot blocked too, Mallon pointing the loose ball.

Donal Casey fired over a great point from distance on 16 minutes but Galway soon quelled any Leitrim defiance with points from Tinney and Halloran. Points from Oisin Bohan and O’Connell followed before sub Oisin Gormally finished a long run with a point.

Leitrim did get a somewhat bizarre goal, referee Paddy McTiernan awarding Leitrim a free and a running Paul Keaney was allowed to take a quick free without stopping and blast the ball to the net.

The goal raised a cheer among the Leitrim fans but Galway truly showed their class with three points in response before the final whistle, Liam Judge, Ryan Monahan (free) and sub Eanna McCormack firing over to seal a comprehensive victory.

Talking Point: Manager Gene Bohan revealed that Leitrim won't take part in the Connacht B Championship after Mayo pulled out. And while you can understand his position, the decision also denies a set of young Leitrim players a chance to win a Cup - not something that many Leitrim teams have been able to do down through the years.

Turning Point: Galway led by a point when Daniel Cox goaled on 17  minutes. Four minutes later, they had another 2-2 on the board and were out of sight.

Ref Watch: Not too much for Roscommon official Paddy McTiernan to deal with, was lenient at the end with a few heavy Leitrim challenges.

Highlight: Hard as it is to say but watching the calm authority Galway played with was a real treat for any true football fan.

Lowlight: For the third time in the competition, Leitrim conceded four goals and the defence has been the achilles heel all year.